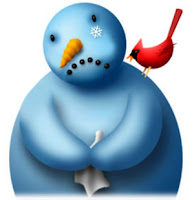 I haven't been sleeping particularly well lately. Had 3 hours of sleep the other night and about 5 hours last night. This shit needs to fix itself pronto, or I'm gonna be a Super Grinch later this week.

I dunno why, but I really hate that my Recent Comments widget isn't working. Steph is tracking down the issue, but I'm too lazy right now to do anything about it. Even though I hate it.

Between Holiday shopping, Holiday parties, being sick and not sleeping I haven't been a very good bloggy friend lately. I've been reading everyone's blogs in my feed reader, but I've been too lazy and tired to actually grace the sites with my presence. I know. It's been hard on you all, hasn't it?

Our big boy, Syd has a stone in his bladder that is gonna require surgery to remove. That's a $1,200 tab right there for minor kitty surgery. Right around the Holidays, of course. What are you gonna do?

Did I mention what a bad idea it was to do my Christmas shopping in NYC during a snowstorm? Yeah, it sucked.

This year's baseball off season has been a weird one. I dunno if it is the economy or an en masse decision by baseball executives around the league to not fall for the uber-agents yearly schtick, but it's been a real slow free agent signing season. Manny, Teixeira, Dunn, Sheets and Lowe are all still out there. So are Giambi, Abreu, Fuentes and a ton of second tier guys.

I promise to get to sending out those questions for the 5 question meme to all those who asked. I just haven't been in the mood. Maybe later today. Maybe tomorrow. I dunno.

Anyone else having a ho-hum Holiday Season thus far?

Sorry to hear about your holiday 'cheer'. Mine's alright so far.

not sleeping sucks worse than snything else. rather eat crap (almost) and get a good night's sleep. dont know if youre into drinking tea but you might want to try a glass of valerian root and passionflower. passionflower relaxes, valerian root promotes restfull sleep. works for some...

youre right. baseball season has been a strange one. when it all shakes itself out, i'd like to see three temas' rosters. mets, yanks and sox. in that order.

sucks that you aren't sleeping. of course it is going to impact your outlook. blech.

snow would help put me into the christmas mood. although ever since mom died i am not a huge fan of receiving stuff when what i really want, just one more long hug, is something i can never have. so i try to concentrate on the kids and try to be as pleasant as i can be. some charity work is helping.

on a different note, my steelers are about to take the field. while watching the pregame, i actually heard james brown and the boys of nfl today admit that it WAS a touchdown last week. yay!

I feel real sorry for your lull in free agent spending. I like how the Yankees walk into a restaurant and say, "We'll take this half of the menu." ;)

(You wanna know what kind of week I'm having? I read this post through Bloglines then almost left it at another blog. I would have done it too, if I didn't looked back at the post to check something else. Sheesh!)

I still can't figure out the widget crap, except for what I found out last night (last blog entry). What I've done instead is changed a simple setting that sends me an email every time someone leaves a comment. My comments aren't moderated -- I just put my email address in a box at the bottom of the Comments page in the dashboard.

As for shopping, we can't do any, period. Fortunately, Nettl gets gifts from the realtors in the office where she works. We're giving those to our kids, and the gift cards to restaurants and such we're going to use for Christmas dinner; we'll get take out and bring it home for a buffet.

My doctor phoned in a scrip for Xanax, so at least I'm sleeping, and when I'm not, I'm mellow enough not to care. I had to get those because my stalker has upped her campaign against me and is slandering me to my business clients now, and trying to extort me to make her stop.

I well understand your holiday blues, Earl. Wish I was in New York -- we could scrape some change somewhere and go get drunk in the Village.

Blogger has been giving me lip for the last couple of days. I bet the deal with the widget is um, something with blogger.

(one of the little ones was born very near the big day ;)

So, borrow some of my good cheer.

sorry about your cat.

He is lucky to be so loved.

Expat - oh, it's not so bad. I realized after I posted this that I made it seem worse than it really is. Just lack of sleep and stuff bothering me.

Dude - Besides K-Rod, it doesn't seem as if the Mets are being too active this off-season. And they have needs.

Becky - no snow by you? Wow. We had a bunch of it this weekend.

ajooja - the Yanks have really been the only players in the spending game this year. I'm talking about the rest of the teams. Weird off-season.

Steph - having drinks with you kids would definitely put me in a cheery mood. One of these days/years. :)

Holly - and you have such a nice Christmas-y name going on too! Glad you are having a good one!

If it helps to have a misery loves company thing going on, I'm pretty blue this season. I was hoping to go to VT Friday during that stupid storm, just didn't work out. So now I remain blue. My BFF is in town but I haven't seen her yet so... meh remains.

Oh poor Syd! That is exactly why D. Sergei needed surgery a couple of months ago...indeed, these things cause the blues. :(

Mind me asking what kind of food you feed your kitties?

I took off for the week as vacation. I will have the three year old granddaughter until Christmas Eve. I need all the sleep that I can get.

I recently came across your blog and have been reading along. I thought I would leave my first comment. I don't know what to say except that I have enjoyed reading. Nice blog. I will keep visiting this blog very often.

Poppy - sucks about your trip to VT. Hopefully you can get together with your fried real soon.

Madge - I just emailed you with the details.

Evyl - Let's hope you find your sleep easier than I have been finding it.

Susan - Uh, thanks for the spam. I guess.

wow, im sure SOMEBODY mentioned how doing your shopping locally would have been a better idea.. im not sure who that was though..

Quite honestly, the Christmas season is extremely depressing to me. The joy that once used to be this Holiday has been taken over by commericalism and high expectation to the point where I just don't want to deal with it anymore. Once all the inlaws have passed away, expect to see me in a cabin in the woods, with a dog, a fire a good book and NOTHING else between Dec 15th and Jan 5th.

The not sleeping well issue got to me a few weeks ago. I normally will fall asleep with my iPod on, listening to some podcast with someone talking. That helps, but the bigger issue was always having something on my mind that I need to shut off so I could fall asleep.

As for the blogging lately, I know that. I think once the new years hits, people will be active again.... including myself.

Bruce - the cabin in the woods sounds peaceful. And a little lonely. I'm torn.

Marty - Thanks, man! I used to try to sleep with the iPod going, but this seems like something different. Although I slept great last night! Woo-fucking-hoo!!!

I'm a bitch from Thanksgiving until the day after Christmas.

I hate the holidays... Boo.