Dear Leader got skillz, yo! 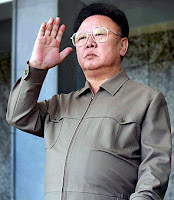 This story is from a few years back, but I just heard about it the other day for the first time.

It seems that Kim Jong-il, Dear Leader of North Korea, fancies himself to be quite the golfer.  He only recently decided to take up the game, but he started off with a bang.  He shot 38 under par in his very first attempt on North Korea's one and only 18-hole golf course.  The round included a hole-in-one on five different holes.  Dear Leader was reportedly smitten with the game after that round.

I can see why.

He supposedly routinely shoots three or four holes-in-one per round nowadays.  That is if you don't believe the rumors that he died a while back.  I'm on the fence with that one.

Whether or not he is actually this good at golf (he's not...no one is), the guy has a fascinating life.  Dear Leader, in addition to his supreme golfing skills, has composed six operas and he enjoys staging elaborate musicals.  He is a self-proclaimed expert at, um, the Internet.

Too bad.  It was gonna be fucking sweet!

I love your posts because every single day you come up with something new, different, interesting and funny!!!

Kudos to you green man!!!
Have a great day!

I loved him in Team America.

the whole fucking country is trouble...I never thought I would be thinking this, but China needs to squash him.

Michelle - why thank you, but most of the time it is just regurgitating what someone else wrote/did.

Avitable - that was him? Just kidding.

2abes - well, let's see how crazy his son is first.

Sybil - exactly. But what we thought is maybe he doesn't realize that his sycophants are knocking the ball in the hole for him. Maybe he actually believes he is this good. Scary.

you promised me that we were BOTH gonna get those tattoos?

Now what the hell am i supposed to do with a picture of a big Asian dude all over my ass?

Slyde - if you got a big Asian dude then you got the wrong tat. Dear Leader is a wee man.

Heff - I'm beginning to believe the rumors that he is dead and that zombie Kim is ruling the North!

The Dear Leader is not the first Stalinist pseudo sporting champion. The late Erich Honecker, former head honcho of East Germany fancied himself as a shot. The problem was he hadn't a clue. So what his sycpophants did was prop him up on some shooting butt and get a drugged up deer to blunder along very slowly just in front of it. Whereupon our man would shoot the deer from point blank couldn't possibly miss range.

'Congratulations comrade! Another truimph for socialism in the German Democratic Republic! the sycophants would exclaim.

Stalin himself had an amazing singing voice with perfect pitch. This really is true...

I believe legend also says that when Kim Jong was born birds talked in human voices proclaiming his arrival.

Hey, I think his niece does my manicures!

WR - Stalin had a good voice, eh? That seems fitting in a way. I dunno why.

Jenn - I'm staying away from any Korean massage parlor jokes. Especially any that finish with a happy ending. Ooops. ;)

Eating dog must give a person mad golf skills.

I think the best vacation I could EVER take would be to go to North Korea. Talk about a surreal place. No cars, no food, hell, no electricity...but huge wide empty streets, no litter, everyone looking at everyone else....and they think that WE are all insane.

I fear that someday soon, this country is going to do something, really, really stupid....like invent a flying car that runs on grass clippings.......and then we are really screwed here in the west.