I don't know if any of you are still watching Dollhouse, after the near-train wreck of a first season last year. I wouldn't blame you if you have abandoned it. That's how un-inspiring the first season was.

And FOX did some odd things with the show. Fans of Firefly already know how FOX likes to fuck up a good Joss Whedon show. For the life of me I will never know why that man allowed that network access to his intellectual property again.

First, they put it on Friday night. The freaking elephant graveyard of broadcast TV programming. I know that this is 2009 and everyone has a DVR, but it is still the kiss of death to have your show moved to a Friday night. And they didn't even move it. They STARTED it on Friday nights. Nothing like an underdog story, eh?

Then they decided not to air the final episode of season one for some contractual reason that still befuddles me.

And what an episode it was! Easily the best episode of the series thus far. It was dark and depressing and it showed how truly evil this technology that they developed could be to the human race. An absolutely amazing story. Something that really could have been a springboard to the next season and the next season after that.  And it starred Felicia Day! Yum. 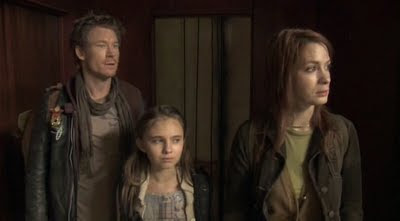 But you could only watch it by purchasing the Season 1 DVD. Or buying that episode on iTunes or Amazon like I did. And that's the way FOX wanted it. They wanted to have an incentive for fans of the show to purchase the DVDs.  Fucking blood-thirsty hacks!

But here is the problem. A lot of folks gave up on the show during the season. Or after the season. Had FOX aired this episode, I think it may have swayed a few viewers (at least) toward remaining with it the next season. And the second season started out pretty strong. Especially for those of us who have watched "Epitaph One".  That's how strong of an episode it was.

Anyone else out there purchase the DVD or the single episode online? I'm curious to hear what everyone else thinks of that episode and the show. I know it is disappointing to some, but I think I can see where it is going now.  And I'm in for the ride.

Well, until FOX cancels it, of course.

Note: Remember to play the Bug-Eyed Trivia Challenge every day. Did I fall asleep?
Pissed in the corner by Verdant Earl at 12:01 AM

I bought the DVD because I love all things Joss and would have bought it no matter what, but I loved the last ep. And when I found out that he was doing another show on fox, my brother, sister and sil, all said Why Joss Why.

i really don't have time to start another series. its been difficult to maintain what I already watch. Between TIVO and "on demand" I can ussually catch up by the start of the new week.

I rented it from Netflix, and I really liked the episode.
Though I did sorta like most of the first season, so i didn't need that episode to save it for me, I can definitely see how it could change people's minds, it certainly hints(hints? How about screams ?) at a much deeper story to be told.
It seems fairly shortsighted(but not surprising) of FOX to not air it.I thought the first episode of this season was pretty strong as well.

i really didnt think they could take this premise and make an episode THAT good out of it.

im in for season 2 (which started off pretty good)..

p.s. the ratings for s2e1 were fucking abysmal...

I have yet to see that episode. I'm sure it's because I'm just too damned cheap to purchase it. I may look into purchasing it online at some point (if it's still available).

I love Joss Whedon - the man is (usually) brilliant. That being said - although I'm still watching Dollhouse - I'm just not THAT into it. It's intriguing, but not a "drop everything, my show is on, don't anyone DARE bother me for the next hour" show.

I own the first season on Blu Ray but haven't yet watched that episode. I need to do that soon.

Rachel - I think we all felt that way about Joss going back to FOX.

Paticus - I liked most of the episodes from Season 1 too, but a lot of folks didn't.

Avitable - I'd be interested to hear what you think of it when you do.

Since my viewing time is so limited, I have to be pretty picky about what I watch. I am currently debating if I am going to keep watching 'FlashForward'. It has me intrigued, but I am wondering if it isn't a rip off of a 1980s Australian scienced fiction film I saw back in the day. My current passions are 'Shark Tank' and 'The Amazing Race' and beyond that, there just are not enough hours in the day (unless someone wants to send me a boat load of amphetamines)

This show is awful.

Bruce - did you petition for someone to send you drugs? Well done!