Note: Hat tip to Stacie Ponder over at Final Girl for bringing this to my attention yesterday. - Earl 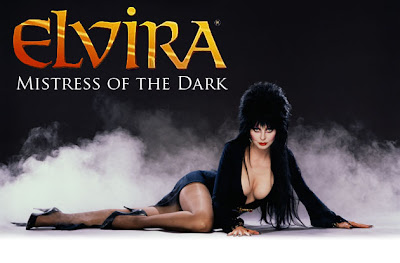 Yesterday was Elvira's birthday.  OK, I guess it was Cassandra Peterson's birthday.  The woman who brought Elvira to life and made happy-happy joy-joy time in young Earl's pants.  She is delicious!

There was a time back in the early-mid 1980's when Movie Macabre* was just about my favorite thing on television.  Bad horror flicks being busted on in Valley Girl schtick by a hottie with cleavage down to her navel?  Yes, please!  What was great about Elvira is that she obviously never took herself very seriously.  She often made fun of herself as much as the terrible films she was hosting.  And shakes alive...they were awful!  But in a good way, ya know?

If you are at all interested in checking out what I found so entertaining back in the day, Hulu has ten episodes available on their site.  Some really good ones too!

It's programming like this that is seriously lacking from today's late-night TV schedule.  I'd love to see a hip and funny return to action for both Movie Macabre and Elvira.  Wouldn't anyone?

Here is a very-NSFW clip from the episode "The Devil's Wedding Night".  I remember watching this one when it first aired.  The boobies, of course, were edited out on the television show.  But God(dess) bless Hulu for, um, un-editing these clips.  In other words, hooray for boobies!  Enjoy.


*Is it just me, or is "macabre" one of the best words ever?

I loved Elvira. I can't remember what years it was, but I watched her many a night with a cross-eyed stare.

"macabre" really gets the point across nicely.

Boobs being the operative word here.

My Dad owned a bar, and when I was a senior in high school, one of the beer distributors gave him a life size Elvira standee ad for Coors Light, complete with a speech bubble.That thing was the greeter at many a high school party.And she said many,many crass things.
Good times.

MikeB - you and me both, my friend.

i loved elvira, but i have to admit it was one HELL of a letdown every time i saw her without that wig....

Slyde - you are into the goth beehive, eh? Perv!

Elvira! She was kickass. Period.

how old is she?
wait, is she still alive?

She was great. She had a role as a biker chick on Pee-Wees big adventure. Remember that?

It freaked me out because I thought Elvira really looked that way and there she was all different looking! Silly me.

Sybil - she still is!

Becky - She just turned 58. Takes her a bit more work to get all dolled up as Elvira these days, I'm thinkin'. Hey...she did date Elvis for a little while there, so she goes back.

Scott - Heya! I remember her as the Biker Mama. Think that was the first time I saw her as anything other than Elvira.

Something tells me this was one that the MST-3K boys would've loved to have gotten their hands on.

I adore Elvira. I think that says enough about me right there.

Going to watch this clip now...

Here man, thought of you.

Steph - or his twin!

Poppy - You are already cool in my book. Elvira just ups my opinion of you.

DG - this one is getting posted immediately. Thanks!

Never heard of her.

I liked Elvira even more when I found out that Tom Jones sent her to the ER by way of his huge pecker. Now that is a movie hostess with credentials. Sadly, the networks just can't pull off this sort of thing anymore with censors looking over thier shoulder. They have given up the genre to cable where Mystery Science Theater 3000 took up the slack.

I have been watching the first season of Outer Limits on LaserDisc and while the effects are somewhat simplistic, the acting and scripts are astounding. I miss that from television. Instead we now get Law and Order SVU and Lost.....bahhhh.