Since Gia was away visiting her sister this holiday weekend (::sniff::), I spent a lot of time catching up on my movie watching. Slyde and I went to go see District 9 on Sunday morning. I liked it, but I wasn't blown away like a lot of reviewers. Especially the idea of serving aliens eviction notices in the beginning. Just couldn't get past the foolishness of that.

But the real find this weekend was Quarantine.

Before any of you film nerds out there start shaking your heads and fists at me, I know it is a nearly shot-by-shot remake of the Spanish horror film [Rec].  I don't care.  I haven't seen the original, although I plan to someday, and if I have my druthers (and I do) I generally prefer my films in English.  It's the arrogant American in me.

That being said...what a creepy fucking film! 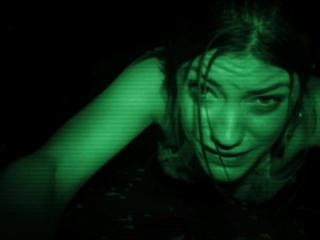 A little slow in the beginning as the filmmaker's are setting up the action.  But after that it rapidly descends into the kind of madness that only the best horror films can aspire to.  Yeah, I ended that sentence in a preposition.  I also used "descend" and "aspire" in a relational way.  Fuck it. I'm writing this on a holiday, so the grammar police will just have to let it slide.

It's a story that never gets old.  A bunch of folks trapped in some kind of situation with a host of baddies.  In the dark.  The gimmick on this one is that it is all filmed like a documentary as a reporter and her cameraman were on-site for a story.  OK, it's an old gimmick...but it worked.

Someone, however, has to give Jennifer Carpenter a sandwich.  That woman is way too skinny!

While the cat's away the mice will play. I do hope that a lot of beer and pizza was consumed during your moment of freedom?

is quarantine choppy, like blair witch? never mind...doesn't matter. i can't watch scary movies anyhow. (nightmares are one thing when i am involved with someone and can curl up against a man who doesn't mind me panicked in the middle of the night, but no fucking way this single girl is gonna give myself bad dreams and then wake up alone. fuck that!)

movies, cable or dvd????can i plug it into tivo?

Not sure if I'll even see either movie, but I agree about Jennifer Carpenter. Eat, woman!

Jimmy - A lot of beer and whisky, but I somehow managed to avoid pizza. I'll have to remedy that today.

2abes - I saw it on Netflix Instant streaming, so I know it is available on DVD. Not sure if it has made it to HBO and the like yet. Hang on...yes, it is showing on Starz. If you have that.

Sybil - And I was kinda into her the first season of Dexter, but she just keeps getting thinner and thinner. Blech.

Jennifer Carpenter annoys me...in fact, I stopped watching "Dexter" because of her. I know, right? Can you believe?

Still, I want to see "Quarantine" because I'm a hypocritical asshole who likes horror movies. ;)

the more i think about disctict 9, like star trek earlier this summer, the less and less props i want to give it.

p.s. putting my hand on your knee in a dark movie theatre never gets old.

Will check this out.

I saw The Strangers this weekend. Also saw in the theater but it's still a pretty scary movie.

Quarantine was much better than I expected, although it got really weird towards the end.

What I loved about District 9 was exactly how commonplace the aliens were - they'd been there for 20 years, so eviction notices and other mundane activities were not unusual.

Hilly - STOPPED watching Dexter? Sacrilege! But I hear ya...

Slyde - It's only uncomfortable during homo-erotic scenes.

Zibbs - I liked The Strangers as well. Creepy film.

Avitable - the weird at the end is what I loved about it. As for District 9, I don't think 20 years (or 100) is long enough to make that situation mundane. I think even "Alien Nation" handled it better.

No shaking of heads and fists here, but happy to bitch slap you. Being a total suck here, but [Rec] kept me pretty much on the edge of my seat terrified. The Spanish do horror pretty damn well - even with all the listhping.

AK - Oh, I'm sure [rec] was fantastic. Quarantine was a shot-for-shot remake, so I'm sure I would love it. Just happened to see the remake first.