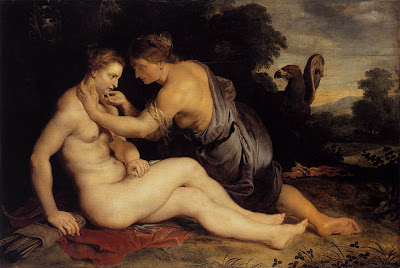 Why? It's just so freakin' huge and cool, how could you not love it? In fact comets sometimes fall so in love with Jupiter that they will decide to stick around for a few years as a temporary moon!

How badass is that?

Comet: "I'm just about the coolest thing in the solar system.  Yeah, I guess that the Sun is pretty cool too, but the Sun doesn't get to scare the shit out of the Earth nearly as much as my friends and I do.  There is nothing I would rather do than take long elliptical orbits around the sun.  Nope.  That's the life, my friends!"

Comet: "Um, hi!  Mind if I stick around for a half dozen years or so?"

Don't even get me started on the possibility of one day colonizing Jupiter's moons as a sort of way station that would help fuel our progress even further into the heavens.

The sci-fi geek in me weeps with joy at the mere thought.

*Looks like a couple of women getting it on, right?  Turns out that the goddess Diana had warned Callisto about the evils of men.  So Jupiter, always the willing rapist, took the form of Diana one day and it was on like Donkey Kong. Jupiter was a baaaad mother-fucker.  In fact, in one of the myths, he may have actually fucked his mother.  I don't recall, but I wouldn't put it past him.  This is a dude who wanted to get it on with all of his sisters, fer crissakes!

Why were the women so "zaftig" back then??

I get all excited about space talk, too. So excited I'd even do Jupiter. Well, no... not really...

rubens makes this not small girl happy. you also make me happy for including that image with today's post!

can i just tell you how much i am loving that jupiter sounds like james earl jones? every time i look up at that big bright object in the sky i am gonna hear j.e.j. saying hi. pretty cool gift you gave me. kinda like the little prince giving the pilot the gift of hearing his laughter when the pilot looks at the stars. today is going to be a good day.
xoxo

Earl: I never really gave it much thought, the planets. Then my daughter started learning about them and she and I went to a planetarium. And dang howdy. Cool beans.

I do enjoy how the names of the planets came about. All mythology and crazyness.

Sybil - he was a selfish deity.

Becky - Rubens was a genius, wasn't he? Never heard the tale of the Little Prince. Do tell.

are you fucking kidding me? you never read the little prince by antoine de saint-exupéry??!?!! email me your address immediately and i will mail you a copy (it is my favorite book ever and i collect copies of it). problem is they came out with a new translation and it is not the same so don't go out and buy it (unless you can find the translation by katherine woods).

seriously, though...i will mail you a copy. best book ever.

or you could read it online, which is SO not the same.
http://wikilivres.info/wiki/The_Little_Prince

you always told me your favorite planet was "uranus"...

Becky - ah yes...now I know it. I never read it when I was younger, but my niece loved it and I read it to her a bunch of times a few years back. I just didn't get the pilot/laughter reference.

I'm glad Slyde did it first, because I was going to. Now I don't have to look like a doofus.

Steph - add some Klingons to the joke and it makes me laugh even harder. ;)

I prefer Apollo. Much less the raping god of war and more like the chill John Lennon type. Plus he was the first to land on the moon.

This is all so confusing. They should name the planets after presidents. I vote that Uranus gets renamed {this section edited by author to protect her precarious reputation for being politically objective}

Diva - he just about always got his woman. A very successful serial rapist.

Faiqa - you? politically objective? And here I though you were a liberal Democrat. (I know...I know) ;)