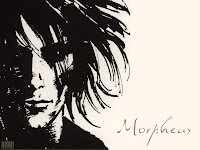 I don't really know if my dreams mean anything. They are often the result of the latest movie I've seen or what I had for dinner the evening before.  And they often play out like a silly movie or a bad short story.

I saw Inglourious Basterds the other day with Gia.  We both absolutely loved it, by the way.  That evening we had some last minute crisis that forced us to cancel our dinner plans and we wound up having tuna fish sandwiches with Fritos as a late-night dinner.  You decide if all that somehow worked itself into this little bit of dream-noir:

So I'm a private detective living and working in some futuristic city under a fascist regime.  I don't know if it is the Nazis who are in charge because I don't recall seeing any swastikas or the like.  And the only way that I know it was a futuristic city is that there was some technology going on that isn't really available yet.   And in the dream I'm wearing this old brown trench coat.  Always in the dream...this old brown trench coat with pockets layered on the inside and out.  No fedora.  A fedora would have been cool.

I'm contacted by a woman who wants me to look for her twin sister who went missing several weeks earlier.  The only clue I have is a blue index card that has some kind of code word on it.  I don't remember what the code word was, but it was something common like "beach" or "carnival".  Nothing too exotic, so it made my job of using this clue as any way of finding where the woman went kinda difficult.

So I went about the private detective's way of detecting.  I interviewed her friends and family.  I searched her home and office.  I contacted my own network of informants and underworld associates.  Anything that might help me find this woman.


It was during a trip to her family's beach house that I noticed Big Brother was watching.  Well, this was the future so Big Brother was always watching.  But this time I spied actual authorities tailing me and even more surveillance equipment than usual in my car, home and office.  Mostly stuff that only exists in science fiction novels or films.


I became more careful in my hunt, but eventually I had to seek out the woman to let her know that I was coming up empty.  I found her at a party in some large glass-encased building.  The indoor courtyard was festooned with Greek columns and large fountains.  She was chatting with someone I assumed was a work colleague when I approached her.  I asked to speak with her in private.


I began to tell her about my failure to find her sister, but it became immediately clear to me that she doesn't recognize me or have any clue what the hell I am talking about.  In fact, she claimed that she didn't even have a twin sister.  My confusion and repeated questioning only began to anger her.  So she started to walk away threatening to call the police.


Feeling that something insidious was going on, I forcibly removed her from the party so that I could delve deeper into the situation.  We barely got outside when I was detained by a host of dark-clad figures and handed a blue index card with some kind of code word written on it.  Then the dreams goes to black as if I had been rendered unconscious somehow.


The next thing I know I was with a group of around two dozen people.  We were standing in line at what appears to be a school or some kind of government building.  No one was talking...we weren't allowed to as we were being kept in line by some kind of police officers in riot gear.  Gradually we were herded through several lobbies and stairwells until we were brought into a large classroom/conference room where we were seated and left alone.


Almost immediately, a man who looked a bit like Ron Livingston began to freak out.  He claimed that this has all happened to him before.  That he has been abducted like this a number of times previously.  He told us that the government is going to perform some kind of psychic experimentation on us.  That we were all chosen because of some common genetic anomaly in our skulls or in our teeth.  I don't know.  He was manic so he was kind of hard to understand.  But he did say that he tried eluding their sensors this time around by having radical dental surgery and doing things like filing down his bridgework.  (wtf?)


He went on to say that if the procedure is unsuccessful they wipe the memories of the participants.  Actually, he thinks they might wipe our memories whether the treatment was successful or not.  It takes some time for the failed subjects to recover before attempting the procedure again, and that is one of the reasons they kept abducting some of the same people over and over again.  Also because the genetic anomaly is so rare.

That's when he looked right at me and said "Like him!", pointing in my direction.


I had no clue what he was talking about, but then I started looking at this blue index card with the code word in my hand a little more intently and something started to gnaw at my memories.  I began searching through all the pockets in my brown trench coat and I found another blue index card with another code word on it in one of them.  This one looked like it was a bit older, like it had been in my pocket for a while.  I didn't understand.  I kept searching and I soon found another blue index card with another code word in another pocket.  This one is even older looking.  All frayed at the edges and bent like an old dollar bill that had gone through the wash several times.

I looked up at the manic man who looks a bit like Ron Livingston and he was shaking his head triumphantly.  Like I understood what was going on.


But I didn't understand.  I was more confused than ever.  And then the riot police stormed back into the room to gather us up again.  Off to the examination room, I assumed.


And that's when I woke up.  Shame, because I would love to know how it all ended.

But it leads me to think I should have skipped the late-night tuna fish sandwich.  Or at least the Fritos.

PS - The illustration above is from Neil Gaiman's comic-book masterpiece The Sandman, or one of the collected works.  I'm not sure who the artist is on that picture (couldn't find a source), but it may be Mike Dringenberg.  That would be my guess.  Someone who reads this will surely know.

Thats pretty bizarre, you read and watch way to much sci fi. You need to reconnect with reality....go watch brigit jones diaries....and clean out the pockets of that old trench coat

2abes - I just realized that the city in my dreams was most likely Caprica City from BSG. Yeah, you may be right.

having not seen tarantino's movie or watched a lot of sci fi, i haven't a clue, but i do know that's one hell of a intriguing story! i certainly want to know what happened next! xoxxo

Ooooh, I love crazy dreams like that. Must eat tuna and Fritos tonight. :)

Its quite obvious. it means that you want me.

but you knew that already.

I never have dreams that detailed. I think I may be subconsciously retarded.

Savannah - me too. Sad that dreams don't work that way.

Sybil - I love them too. And there was a ton of detail...small stuff...that I left out. It was a very vivid dream.

Slyde - you ain't got the plumbing I'm interested in, honey.

Heff - I think most of us forget the details in our dreams almost immediately. I usually do, but sometimes they stick. This one stuck.

First it was a bit old school detective sci-fi type dream, then it got all weird and psychic experiment!

Seems pretty standard if you are a person who consumes a lot of old school detective sci-fi and comic book type stuff. Or if you use to be that kind of guy.

Also, it would be a pretty standard dream if you were into conspiracy theories or a fan of the X-files. Or use to be that kind of guy.

Teeth are interesting symbols in dreams. But, the guy that kept filing down his teeth, he sounds a lot like the standard "i'm insane, they have a device in my tooth that they use to hear me or track me" type of character. *

I can say that I have worked with hundreds of certifiable crazy people and not one ever thought they had an implanted device in their teeth.

Very cool with the finding of multiple blue cards of various ages/states of decay.

Let's hope this dream never comes true. Because that would mean you would never stop searching for a woman that doesn't exist.

And you would keep getting blue cards that would lead you to the same glass building. Only to be taken to the experiment building. And each time you would figure out what was going on before they start the experiment.

But after, they erase your memories and you go back to your day job. Only to get a new blue card. Thus starting the whole thing over again.

*The one redheaded bearded guy, on the X-files, the one that was part of the trio of misfits- he dated a crazy blonde chick that ripped her tooth out on one of the episodes. She used a pliers. And sure enough, a microchip was underneath.