So over a year ago, I had heard about a Norwegian film called Dead Snow that was making the festival rounds. It was a horror flick about a group of med students who go to a remote cabin in the Norwegian woods only to be attacked by Nazi zombies! 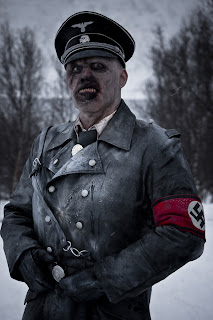 I was psyched to see it in the theaters, and I waited oh so patiently for it. Alas, it never made it to the theaters around here. I don't know why. It looks like it made to only three or four screens over the summer anywhere in the US. Foreign flicks really don't do well here in the States.

But when it became available on DVD here, it also became instantly available on Netflix streaming. Psyched! We watched it over the weekend and I gotta tell you...it delivered! It more than delivered.

These were just about the craziest zombies I ever did see on screen.  Full Nazi regalia, shooting guns, using bayonets, climbing trees.  In fact, I'm not quite sure they fit the traditional film (aka Romero) definition of a zombie, but that's an argument for another day.  Bottom line...they were an awful lot of fun.

Bloody, funny, and picturesque.  It was a damn fine zombie flick.

Oh, I've been wanting to see Dead Snow forever! Thanks for the heads up. I've added it to my NetFlix queue.

never heard of it, but i've added it to the instant queue! damn, but ain't netflix jes too damn fine, sugar? xoxoxo

Dave - Even better, you can watch it instantly!

Savannah - Netflix is the best!

There's a lot of that about.

its on my queue too. as soon as i finish watching public enemies, this one is getting viewed...

Slyde - You are gonna love it, even with your dislike of subtitles.

About to watch it on the computer through Netflix.

Haven't watched a zombie movie in a while.

"Dave - Even better, you can watch it instantly!"

B.E. Earl, that's exactly what I just did and you were right. This movie is GREATNESS!

Did you see the Rob Zombie cartoon El Superbeasto? Plenty of nazi zombies there, too.

Hank - No I haven't. I'll have to check it out. I know he's a fan of Nazi Werewolves though. He did the fake trailer for Werewolf Women of the S.S. for Grindhouse. :)