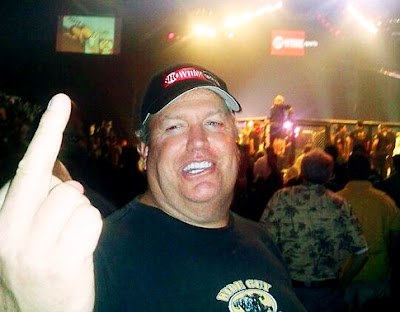 So this probably isn't a story anywhere but in New York or south Florida, but the media here is killing this story so I figured I would weigh in.  Rex Ryan, the head coach of the NY Jets, was in Miami this past weekend attending an MMA fight.  He took some time to get interviewed by the local talent, and, as Rex Ryan does, he started some shit.  With a big old smile on his face, he told the Miami Dolphin fans in attendance that the Jets were gonna beat them twice next year.

A little good-natured ribbing, right?  Well, some of the Dolphin fans began heckling him so he flipped them the bird in response.  No big deal, right?  Wrong.

The media, led by WFAN's Mike Francesa and the local papers, have been making way too much of a mountain out of this particular molehill.  They were calling for apologies and fines as Ryan represents our fair city and the NFL.  They said that whatever goodwill he earned this year by getting the Jets to the AFC Championship Game in his rookie season was erased by this class-less gesture.  They say that this is just another symptom in Ryan's pathological arrogance.

I think "they" are full of shit!

Do they really think Jets fans are gonna be upset because their head coach gave a bunch of Dolphins fans the finger?  C'mon...as we speak they are building an altar for the guy!  Have any of these media types actually met an NFL fan, particularly a Jets fan?  Apparently not, because it's actions like this that cements their love for their portly head coach.  Not their disdain.

I can't stand the media's attempts to glamorize the NFL.  It's a bunch of really strong, really fast guys beating the crap out of each other each week, and that's it.  Sure...it's entertaining, and there is some strategy involved.  But brute force is the name of the game, and no amount of "class" is gonna change that.

I'm a fan of the NFL.  I don't love it like I love baseball, but I'm a fan.  And occasionally, I'm slightly embarrassed to be a fan.  Especially when I really think about what's going on down there in the trenches, and the long-term affect it is having on some of these guys.  But one thing I never do is put the game up on some ridiculous pedestal that can be shamed by a brash coach flipping the bird to his team's rival's fans.

It's football.  Not the ballet.  Get over it.

I just don't understand the media's issue with this guy. I mean...if I'm a player or fan, I want my head coach to be a bombastic blowbag with supreme confidence in his team and players. Should he have said that the Dolphins were gonna split the series and beat the Jets in the playoffs? I mean...I like a good Jets' Head Coach joke, but C'MON! Give me Rex Ryan over the P.C. majority any day of the week, and twice on Sunday. Nay...THRICE!

(but did you watch pink's performance, sugar?)

Rex is his dad's son, and we had that dad here in Chicago for some time.

Must be a slow news week?

I hate when shit gets all puritanical.

thats pretty much how i feel about boxing.

i used to be a huge fan, but these reporters trying to glamorize it when it reality 90 percent of boxers are just big stupid, nearly incoherant brutes always pissed me off.

Doggie - Hell to the fucking yeah!

Savannah - Not yet. Sorry, but I will! (eventually)

RW - I'm an Eagles fan, so I love me some Buddy ball too. Rex hasn't slapped one of his players yet, but I'm hopeful. ;)

Slyde - I was actually gonna mention boxing in the post, but I was getting tired. I'm the same way. Big fan, but when you think about what these guys are doing...

i don't give a fuck if it is football or ballet, flip off whoever the fuck you wanna flip off without apologies. GOD BLESS AMERICA!

I prefer the good old English two fingers. Originates with the medieval English archers (the WMD of the time) yenno...

If the French captured them, they would chop off the forefinger and second finger so they couldn't operate a bow and arrow any more.

Showing the two fingers meant that they were still fully functioning archers.

Be afraid Frenchpersons, be very afraid!

WR - I actually knew that already. My father was a big fan of explaining things to me and that was one of them. I dig the two fingers too!

Seriously - who the fuck cares? I hate people. They get bent out of shape over some guy flipping the bird?!!!