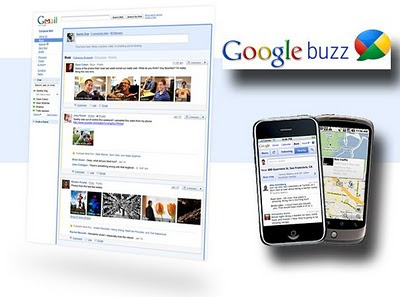 So as if they haven't already got their hands on everything that is anything on the Internet, it looks like Google is looking to take on Twitter. I guess.

So once in a blue moon I check my Gmail account to make sure no one I know is using it by mistake. 8 times out of 10 there isn't any activity on it.  But I noticed a new feature under my Inbox the last time I checked it. Something called Buzz. I ignored it because, well...it didn't interest me. I thought it was gonna be buzz-worthy news topics or something, even though it made no sense that the link would be on my mail page.  Again...whatevs.

Then today I saw an article about Google Wave.  About how it is gonna be a new social networking device that could eventually compete with Twitter. Why on Earth would anyone want to do that?  Well, I guess Facebook stole MySpace's thunder recently, so maybe Google thought they could buy in on the act by taking on Twitter.  Except there is this automatic set-up that uses your address book to start you on your list of who you follow.  Sounds like some privacy nightmares, if you ask me...or her.  One final time...whatevs.

Anyone using Google Buzz out there?  How about Google Wave?  Aren't they kinda the same thing?  Am I the one one who feels like getting high after digesting those brand names?  Is the drive-thru at Taco Bell still open?  These are all valid questions.

Goofed around on it a bit today. Kind of a cross between Twitter and IM. Yeah! More ways to waste time!

Not me. I'm even considering leaving Gmail because of the privacy issues. Doesn't anyone out there offer a simple email service? Why does everything have to be a freakin' social network?

Thank you. I feel better now.

by default it seems, sugar! i looked at it and thought what a waste, well, just by opening it, it sent off invites to 15 contacts w/gmail accts! i KNOW! i can barely blog these days, much less try and maintain a fb page and twitter (only 101 tweets) xoxoxoo

i don't like it because it's a tease. Like i have a new 'buzz' message and i always get excited when i get new messages in my gmail account . . . .

except its not a message for me but some blogger I wrote like six months ago that one time and now that one blogger is talking to someone who they know and I'VE NO IDEA who either of them are.

yet there I am, reading their conversation.

so, i just disconnect from who i don't really know from those that i know.

but. i'll sing it to mountain tops.

Just go to the bottom of your gmail screen and hit "turn off buzz". Done and done.

I like Buzz better than Wave but still, eh. I'm considering leaving Gmail as well or totally disconnecting all services that go with it.

Buzz seems just to connect all the Google Followers into one source. It's also a way to force people who don't use Twitter into reading tweets. Not sure what the point of it is, though.

Thanks Downtown Guy. The Buzz is gone!

Uncool - that's what I thought.

Savannah - the automatic set-up is bullshit.

Holly - I'm one of the last holdouts on Facebook. I won't do it.

Hank - always there with the "how to"'s. Thanks!

Hilly - I hear that!

Avitable - that's what I'm seeing so far. Since I rarely use that email account, it doesn't have any of my email contacts. So it doesn't really affect me.

Hank - that's two in two days for you here in my comments. You should get paid for that. :)

I'm on Buzz and Wave. I tried to get used to Wave, but it just didn't seem to be intuitive for me. Buzz looks better since it's more integrated. I'm curious to see how well this integrates into my daily social routine.

Anything that brings me even remotely close to the plasticity that is Twitter, is definitely not for me.

Jimmy - That about sums it up for me too.

Call me old fashioned, but I'll take my "buzz" in the form of. Bourbon infused with Bacon. And ever since you told me that the next batch will likely have chewable chunks floating around...well...I wanna do real bad things to you. Let's undress like cross-eyed strangers.

Doggie - It will be all set to go by March 1st. That's when you start drinking again, right? ;) Oh, and Buzz Chew should have made an appearance here in this post. Dammit!

I'm not really even a fan of Twitter (even though I have an account), so Buzz is on my gmail, and I screwed around with it today, but I am not all gung ho about either service, really. If it starts to annoy me, I'll ignore it, like I do everything else. :)

Poppy - Some would say Twitter is stupid as well, but that's another argument. ;)

Sybil - I live my life by ignoring stupid stuff.

not a fan of the buzz. not at all.
BUT, i do love my gmail account so i can ignore the buzz crap.
:)

I use Google mail as my primary e-mail account and I have checked out "Buzz" but have not really used it. It hasn't been really well thought out and is still in the 'tweeking' phase. I don't know if it will catch on and rival Tweeter or Facebook.

But having had my Android phone for the past 2 months, I can attest that Google will rule the world in about 10 years, with Microsoft as its boot-licking lacky. Google is way ahead of the curve regarding innovation and the social application of technology.