When I heard that FOX would be adapting a version of Human Target (a comic book character created by Len Wein and Carmine Infantino back in the early 1970's) I was mildly interested. I didn't really need another weekly television series to get involved with, but I plugged it into the DVR anyway.  Just for shits and giggles.

Then I watched the first three episodes last Wednesday when nothing else was going on, and I hate to say it but I think I'm hooked.  It's got a few things going for it so far.
Yeah, it's a fairly mindless bit of fluff.  But it's entertaining and harmless, and sometimes that's all I need from a television program. 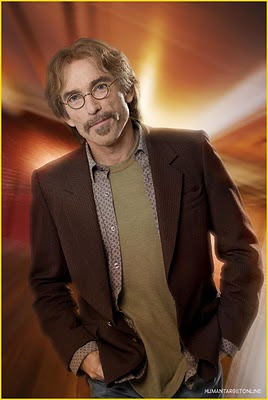 He is rockin' that Sgt. Pepper era look, is he not?

i don't know how i feel about locke taking this turn that he has. and i found sawyer to be overacting the whole death scene.

but, sayid was, as always, rocking the black tank top and black dress pants like nobodies bidness.

Uncool - whatever it is, it's working!

i did notice this series, but hadn't looked...i will now, sugar! xoxox

when is it on?

BTW--This dude is the new Freddy Krueger. 1,2...Freddy's comin for you!

Sounds fun. But I can't add it to the list.. too long already. Glad you're enjoying it, though.

Savannah - And I will eventually watch that Pink video. ;)

Kate - I know the feeling.

My wife and I are definitely enjoying this one; it's one of our new favorites.

Ren - I didn't even mention last night's episode which I loved. I think Guerrero is gonna be one of my all-time favorite TV characters. Looks like he's got Chance's back in a big way.

He was so great in the Watchmen. Can't wait to him in that next flick. On the Island.

I'm with ya, homie. I did not want to like this but I really really do.

Zibbs - And he is playing Freddy Krueger in the remake.

I started watching it too. It's like an action movie every week. Fun, leave your intellect at the door.

Love Jackie Earle Haley! Might check it out just for him.

Bobby - total brain candy, but sometimes we need that.

Teeni - go to Hulu.com and watch the pilot episode. He shines in that one. And if you like it you can watch the next three episodes there as well.

I watched this show for shits and giggles as well....sad to say, all I did was giggle. While the premise is intersting, the reality of the show is so ludicrious I couldn't take watching it.

In the first episode on the speeding train across California, the BRAKES GO OUT and we are heading for dead man curve, so we just strap on a parchute and hope off the back to 170mph.....PUHLEEASSE....

I totally gave up when he piloted the 737 UPSIDE down to put out the fire in the cargo bay......a...excuse me, plane not structurally capable of that, the wings would have ripped off and everyone would have died.

Drama and action I can take, but I will take my fantasy in outer space with semi-nude cat-like 9 foot tall aliens.

Bruce - um, really? Did you really roll your eyes at them flying a 737 upside down? Really? Dude, it's not meant to be taken seriously. So yeah, this show isn't for you.

I haven't tried it yet, but I am skeptical. I'll probably wait to see if it gets canceled or not and then decide whether I want to watch it.

Avitable - I was skeptical too, and if you don't expect too much (see Bruce's comment above) I think you'll find it enjoyable.