The Truth Was Out There

Last night I watched the latest episode of Human Target. It's quickly becoming one of my favorite shows. The ending, in particular, to last night's episode was just so much fun. Something right out of a film noir private detective/tough guy flick. I was also juiced to see a couple of guest stars* who had previously been on The X-Files. Kristen Lehman (the Invisigoth from "Kill Switch") and William B. Davis, the Cigarette Smoking Man himself. So much fun!


*OK, the asterisk "footnote" in the middle of a blog post is an homage to baseball writer and blogger Joe Posnanski. He does it all the time on his site. So much so that he has even named it a Posterisk. Yeah. Anyway, I really dig the geek-pandering that is going on with the guest stars on this show.  Besides The X-Files, we have also had actors from Battlestar Galactica, Firefly, Smallville, Lost and those Stargate shows.  Now it's something I look for every week.
"Kill Switch" was one of my favorite episodes from The X-Files, by the way.  Besides starring the lovely Kristen Lehman and an appearance by the Lone Gunmen, it was written by cyber-punk legend William Gibson.  It had to do with some technology developed to shut down an Artificial Intelligence that could shoot frickin' laser beams from the frickin' sky. So much fun! 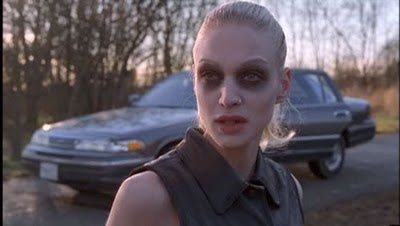 OK...she doesn't look so hot here, but believe me...
I always loved those smartly-written filler episodes of The X-Files.  Nothing to do with the long-term story arc of chasing down Mulder's little green men.  And it wasn't even quite like the "monster of the week" episodes that, honestly, made up the bulk of the show.  They kind of felt like those one-shot issues of the comic-books I used to love back in the early 1990's.  Something that Garth Ennis or Neil Gaiman or Jamie Delano would write in between the longer story arcs on their respective titles.

But whatever kind of episode it was, filler, "monster of the week" or long-term story, The X-Files was just about as entertaining as it got in the 90's.  It was an era-defining show.  The Lost of the previous decade, one could say.

Did you want to believe?

Hmmmm.. now the X Files I am familiar with. Scully was a cracker, and I would have loved to have given her more than just a mystery to chew on.

Jimmy - Scully was all right in my book.

Totally up top on the X-Files, dude.Didn't watch it at first, but was hooked fully when i finally did start(somewhere late season 1, I think). I didn't like the last couple of seasons with Robert Patrick & Annabeth Gish though(nothing against them, I just thought the show kinda went adrift).
Loved the COPS themed episode, and still have nightmares about "Home".

Scully always DID clean up very nice. I even still liked the show when Robert Patrick and Annabeth Gish (gish the dish) showed up...

I liked the smaller, well written episodes of the x-files too.

no time or energy to find and or fall in love with new shows.

keep writing about them though. Then, after i read about it for like the 30th time i'll check it out and then become all obsessed with it like I did with Final Girl and let the right one in.

thanks for being a link to the cool stuff I miss Earl :)

X-Files ruled, Dude and I agree that Human Target is a great show, too, and seems to get better with each episode. Too bad I read this morning that it may be on the chopping block ... .

loved the x-files, but some of them scared me beyond belief. there was one episode that included teachers and a snake. i've blocked most of it so i can't give more details, but i remember being so scared that i forgot most of the lord's prayer as i was rocking in a corner, holding a butcher knife, trying to recite "the lord is my shepherd" over and over.

yeah, i'm not meant for scary tv, books or movies.

because i believe. i do so believe.

Paticus - those were great episodes.

Slyde - I liked those seasons too, but not as much as the early stuff.

Tony - Heya! And yeah, I had a feeling about it getting canceled.

Sybil - It's a harmless bit of fluff, but fun.

Becky - Wow! That's quite the image.

I still need to go back and watch the pilot and see what I think. I need to get caught up on Fringe first, then this is next.

Avitable - I should probably catch up on Fringe too. I stopped watching after the first 6-7 episodes even though I was enjoying it.

It is apparently very hard to get pandas to breed.