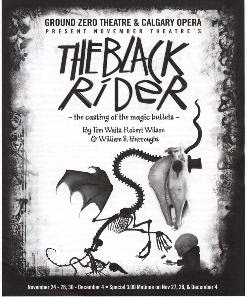 
Wilhelm, a file clerk, falls in love with a huntsman's daughter. In order to marry, Wilhelm must prove his worth as a hunter and gain her father's approval, but, as "a man of pen and ink", his shot is lousy and his hopes of marriage worsen. That is until he is offered magic bullets by the devil, Pegleg - who assures him that his bullets will always have a sure shot. However, Pegleg stipulates that, while most of the bullets will hit anything Wilhelm pleases, one of the bullets is under Pegleg's control. Foolish, naive, and overrun with desperate hope, Wilhelm accepts the Faustian pact. On the day of Wilhelm's wedding, the final bullet strikes his beloved dead. He then goes mad, and joins the previous victims of Satan's cunning in the Devil's carnival.

I'm just gonna file this under the heading of "Shit I Never Knew About". And given my recent fascination with all things Tom Waits, well...I should have heard about it before now.  Back in the late 80's Tom Waits got together with William S. Burroughs (!!!) and vanguard theater director Robert Wilson to create a Faustian musical fable based on German folktales.

Those must have been some fun times for these cats.  And given Burroughs own history of love lost at his own drug addicted hand, maybe a bit cathartic as well.

And it's something I never would have known about were it not for the Internet.  Oh sure...MAYBE someone would have told me about it eventually.  But there aren't a whole lot of Tom Waits folks in my life right now.  Pity.

This is something that I'm going to get into a little bit later on this week.  About something else that I recently found out about.  Something I should have known about years ago.  But for right now, howabout a three-part documentary on The Black Rider?  Sounds good?

Oh, did I mention that a bunch of the documentary is in German? Hehehe.

The Black Rider is also the name of my pimp...

I loves me some Tom Waits, and have for years, but I did not know of this.
I am so ashamed.

For some reason I have absolutely no Tom Waits in my music collection whatsoever. So, where would you suggest this total noob begin? Any album a good starting point?

Savannah - I learn something new every day.

Sybil - I don't know if I really enjoy the music here, but it's pretty interesting nonetheless.

Kevin - Ooh, ooh, ooh...start with "The Heart of Saturday Night" from 1974. It's such a great album. And his style was a bit more melodic back then. Less of the affected wrecked voice style. I hate to be one of those "Well, the old stuff is sooo much better than the new stuff" kinda guy, but... 1992's "Bone Machine" is pretty amazing too.