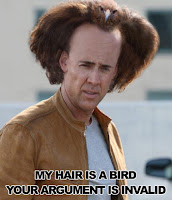 *Seriously, how cool is it that Dave2's "Apple Whore" image is the very first thing that pops up under a Google image search for Apple Whore?

Tom Cruise just made the funniest joke from a two year old movie that I've ever seen...EVER! He really brought the thunder...tropic style! Truly hilarious. And it goes without saying that Jennifer Lopez is still entirely relevant.

The last time a young pitcher got DC excited his name was Walter.

i cant see that keanu clip here at work...

but i need to.

Doggie - Yeah, I was gonna mention that. Way to be topical, kids.

RW - Oh what I would give to have seen Big Train pitch. I saw some old movie clips recently and I had no idea that he mostly pitched side-arm before. Amazing.

Slyde - It's just a picture, not a movie clip. So click away and enjoy.

Those Keanu pix WERE pretty funny !

Have you seen this ? I think it goes well as a hybrid(I thimk a "mash-up" is what the kids call it these days)of Keanu Reeves Eats Everything and the Nic Cage picture up there:

Oh, and I TOTALLY missed the hot links joke. I really need to get my mind in the gutter.