Welcome to the Hellmouth

It's been several years since Buffy (with a big assist from Spike and the rest of the gang) closed the Hellmouth in Sunnydale. There have been stories of another Hellmouth opening up in Cleveland, but those have been mostly unsubstantiated.

Now it looks like a new Hellmouth has opened in Guatemala City. 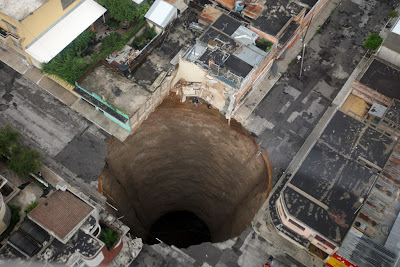 This photo looks so fake that I hard a hard time believing it wasn't photo-shopped.  But it's not.  There are plenty of other photos out there on the web of this giant sinkhole that opened up after a tropical storm hit Guatemala a few days ago, but this one is the most impressive.  And although it looks like it goes straight to Hell (and it might), it's "only" around 200 feet deep.

These sinkholes are a not-so-rare occurrence given the topography and poor construction/city planning in that area. Thankfully, no one was hurt when this particular sinkhole/Hellmouth opened up, but there have been fatalities in that city due to sinkholes in the past. Most recently in 2007.

And since no one was hurt in this particular one, all I can say is...how fucking cool is that?

I think there were some fatalities do to area mudslides though.

but this, gaah. Mr. Hall has been staring at this all weekend.

All I have to say is god must have been pissed.

probably something you wore.

Dude, that thing is freaky! No shit, that looks fake.

again, it was Earl's fault.

again, probably something he wore.

What you failed to mention was that the sinkhole occurred at the site of a school bus stop! THAT'S why kids need to be dropped off driveway to driveway!! Won't ANYONE think of the children!?!?!?!?!?!? :)

Candy - I'm waiting for the next phase...the dead walk the earth. That'll be cool!

Holly - Maybe it had to do with someone talking about something they said they weren't going to talk about. Hmmm...

Paticus - Oh, that would have been awesome if the sinkhole had taken out a school bus. AWFUL...I meant awful. Clearly not awesome...awful. Yeah, that's what I meant.

Guatemala? Nice try sinkhole. Anyone can open up a gate to Hell in Guatemala. They're already halfway there. Call me when you get serious and wanna try to run with the big dogs here in America. Let me see you try this shit in Times Square. It'll never fuckin' happen. Sinkhole...you are a bigger pussy than the aforementioned suburban children from yesterday's post.

Doggie - That's right! C'mon sinkholes...bring it! Yeah, that's what I thought! More like stink-holes, if you ask me.

Speaking of stink-holes. My bitch and I were talking about this the other night. You know what really chafes my grundle? When people use the phrase "Opinions are like assholes, everybody's got one," without following up with the requisite, "and they all stink!"

Why has this important component of such a popular expression fallen by the wayside? Sure everyone's got one, but without telling me that they all stink...it just loses the pungent punch in delivery. If you're going to be unoriginal...at least follow through.

Doggie - I'm gonna go the other way on this one. I prefer to even shorten it further. "Opinions are like assholes...", and just leave it at that. I think the rest of it should be inferred.

yet just a leeeetttllee bit funny :)

Holly - I honestly don't know what you are talking about. ;)

Opinions are round and pink (or colour of your ethnicity)?


some dude in Iran recently blamed earthquakes on the provocative dress of women.

it was all over the news-even I heard about it. and this is coming from me, WHO HASN'T HEARD OF AMERICAN PIE.

Seeing the pics of this sinkhole (and the ones from the 2007 sinkhole), it freaks me out to see this. Makes me really think about where some of these disaster movies get their ideas from and to know that they can happen in real life.

Holly - There was an entire Boobquake Day in response to that cleric. Women around the world showed as much cleavage as possible to (scientifically) see if it would cause another quake. You didn't partake?

Marty - Imagine a giant sinkhole like that in the middle of LA? I'm sure Roland Emmerich has.

I cannot stand to see this picture - it's one of my "things I can't control" nightmares!!
Unbelievable!

Oh, and totally unrelated, my friend comes from a family of inbred people from Yemen, and one of those consequences of the inbreeding is that some were born without assholes.
True story.
(She was born with one.)
(I haven't seen it, or anything.)

Sybil - So what do the doctors do? An emergency asshole-otomy?

DAMMIT!!! WHY DO ALWAYS MISS THESE THINGS?!!

hopefully it becomes an annual holiday :)

I did a double take when I saw that pic. I was like "no way, totally photoshopped" until I realized it wasn't. We're doomed.