Didn't really get a chance to talk about it last night on our radio show (listen here or here, if you want to be one of the cool kids) because it's more of a visual thing, but it seems like certain baseball players are now doing their best to bring goofy back.  Not the Disney character who may or may not be a dog, but just the general goofiness that used to be so prevalent in the game back in the day.

Like Coco Crisp with the Oakland A's.  He let out his braids and went with the giant afro look last week. 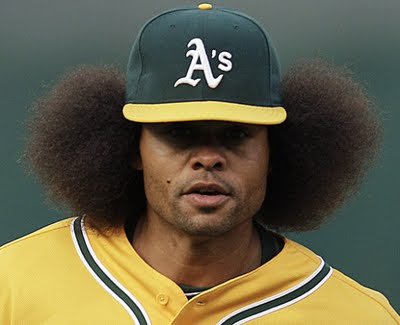 Or John Axford, a pitcher for the Milwaukee Brewers.  He decided to go with the Rollie Fingers handlebar mustache look. 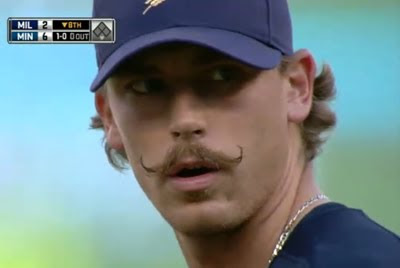 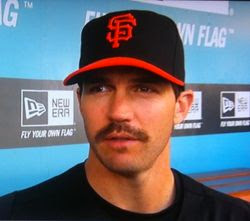 I don't know if all of this is signaling a more permanent shift in the level of goofy that baseball has going on right now.  But I appreciated the effort from these guys.  After all, it's only a game.
Pissed in the corner by Verdant Earl at 12:01 AM

Annabelle/Slyde - I'm sure that's why he grew it. Especially for Slyde.

The John Holmes look is coming back? I shudder to think.

I respect a good 'fro.
However, the handlebar moustache is just stupid.
And when did they change the spelling of mustache? Fucking spell check.

Jimmy - Up top, if not down below.

Paticus - You know, Wilson was the reason for this post. But I felt like I was mentioning him too much either here or on the radio show, so I left him out on purpose. Silly me.

i love this post. because i love silly looking people. they make me smile and as we know, i do so love to smile.