Let's hear what The Colonel has to say about it in his weekly email, shall we? 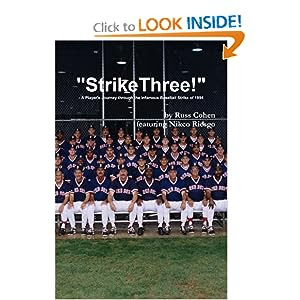 “Strike Three!” deals with the cancellation of the 1994 World Series and the replacement players who followed. Both of these events were historic and Nikco Riesgo was one of the first players to cross the proverbial picket line and put his career on the line for the good of the game. In his own words, ” This book re-lives my real life experience during the Major League Baseball strike of 1994 and why I decided to play against the enormous pressures of the Major League Players Union - to unify all professional players within one union, from the minor leagues to the majors. Any player who dares to play this “Game” must read this book and share it someday with their grandkids. You will never forget this.”
In the meantime, join us tonight at 9 using the following link:
http://www.talkshoe.com/talkshoe/web/talkCast.jsp?masterId=95365&cmd=tc
Or as usual you can listen to the show on I-Tunes when its posted during the week:
http://itunes.apple.com/us/podcast/just-talking-to-the-cornfield/id424603470
Enjoy the games and we look forward to chatting with you later.

Sincerely,
Earl and The Colonel

Pissed in the corner by Verdant Earl at 11:51 AM

Oh, man - if you poop, I hope you'll let us know so I can laugh. Sybil's been drinking and is speaking is 3rd person, now.

RW - Yeah, I'm not too happy with the Talkshoe interface. I've never had any problems with it myself, but several folks have had issues with it. Thanks for stopping by!