I got a little hillbilly in my genes.  Must have.

Because ever week when I'm watching Justified and Mags brings out her "apple pie"...that's moonshine whiskey distilled with apple and spices served in a big ole' mason jar...I start to salivate.  Man, I want that "apple pie" more than anything.  And drinking booze out of a mason jar?  Like the title of the post says, oh hell yeah!  That's what I'm talkin' 'bout.

Unfortunately, you can't get that 'round here. 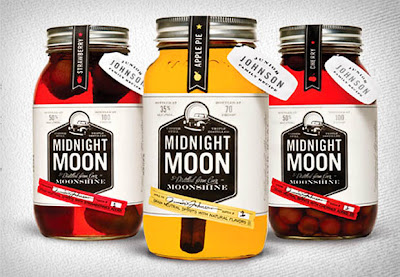 That's Midnight Moon "Apple Pie" whiskey right up front.  The other two are strawberry and cherry, but frankly...the thought of those two makes me throw up in my mouth a little bit.  But the "apple pie"...yeah, I want that.  NOW!

I found it at a local liquor store earlier this week and I sat my faux hillbilly ass down last night to watch this week's episode of Justified with it.  Gia was cracking up.  She wouldn't try it, but she said it smelled like alcoholic apple pie.  Which it did.

I can't even begin to tell you how happy I was when Mags brought out the mason jar, and she and Arlo shared a drink of "apple pie" while I joined them from my living room.

It's the little moments in life that bring me some wonderful joy.  This was definitely one of those moments.

And a big "fuck you" if you don't understand that.
Pissed in the corner by Verdant Earl at 12:01 AM

The only "Fuck You" I'm directly your way is that you live in a place where you can get these cool new forms of booze. Utah's motto for new and exciting products is pretty much "banned until you don't want it anymore"

Dave2 - you know that "fuck you" wasn't shot in your direction. YOU understand me. Um, right?

I will have to try and find that. Man, that is one fine television show.And how can one go wrong with alcoholic apple pie? Plus, it disguises poison real well, I reckon.

Dawg, I watched some of Lonesome Dove the toher night with my wife and she was playing a prossie in it. Most unappealing - but what an actress. She was extraordinarily excellent in Million Dollar Baby.

If you eliminated the posts where you eat something, drink something, or watch baseball, you would post about once a year....

Slyde - And what fun would that be?

Oh my gawd...If I can find that, for my big country husband, I will be the BEST wife ever.

Well, really I already am, but this would definitely get me points during those bitchy times, where he wonders why in the hell he married me.

What the ?! WANT! I'm totally making my friend order this shit. YUM.

i need to know the truth...when you finally had the pleasure of tasting it, did you get a little hard? was it that good?

Annabelle - It was a little sweet, but damn tasty.

Sybil - Your friend owns a liquor store? Good friend to have!

I don't understand this.

Doggie - Sure you do.