You know that scene in the film Midnight Run, right?

Charles Grodin, is a bail jumper being brought across country by Robert De Niro, a bounty hunter working for a bail bondsman. They stop at a diner in the Southwest someplace, waiting for the Western Union office to open up. They have no money, but the waitress tells them about their breakfast special. Chorizo and eggs.

That's what Grodin wants, but they have no money yet. De Niro tells him when they get their money can have whatever he wants. He wants chorizo and eggs. But the way he says it is hysterical. And real. Alas, he never gets them due to the ensuing wackiness.

That scene has always stuck with me, and others too based upon how often I use the phrase "chorizo and eggs". People always seem to remember that scene, in particular, from the film. Maybe because it was something we could all relate to. How often have you seen a dish served on a television program or read a recipe in a magazine and become obsessed by it?

Happens to me all the time. 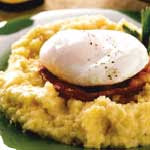 It happened to me last year. I was reading a review of a new restaurant in NYC that served a dish for brunch with cheesy polenta, crispy pancetta and eggs served sunnyside up (or poached) over the top of them. It sounded delicious, and it soon became all I wanted when it came to breakfast. But I lost the review and I forgot which restaurant served the dish. Crap!

So every time we went to breakfast, I started acting like Charles Grodin in Midnight Run. "Cheesy polenta, crispy pancetta and eggs sunnyside up" is what I wanted. I became semi-obsessed with it. I say "semi" because if I really wanted it, all I would have to do is google the recipe (here with poached eggs), and I could have definitely found a restaurant that served a variation. But it was almost always more fun to just say "cheesy polenta, crispy pancetta and eggs sunnyside up" whenever we went out for breakfast as I savored in the disappointment that came with seeing that it wasn't on the menu. Yeah...that was more fun.

Guess what I had on Sunday?

That's right. Cheesy polenta, crispy pancetta and eggs sunnyside up. As a birthday present, Gia's sister (an awesome chef) made it for the entire family for brunch. And it was everything I hoped it would be and more!

So maybe Grodin's character eventually had his chorizo and eggs. I dunno. I can only hope so.

Because some things in life are certainly worth waiting for.

I love that movie. Thanks for reminding me of it.

I am frightened by trivia. It reminds me that I am insignificant.

MikeB - One of my favorites.

Jiggs - Trivia is the only thing that actually makes me feel significant in this big world. Huh?

The last two questions of today's Trivia are ridiculous and should be stricken.

I do it all the time. When I was in college, and I didn't know how to cook, I'd often turn the tv off in midshow and drive to the store to buy the food that was being advertised.

I'll be getting on that recipe PRONTO.

Chorizo and Juevos Ranchero with flour tortillas and frijoles refritos is one of my favorite breakfasts. And I can certainly see why anyone would obsess over them.

And I thought the last two questions were the easiest ones on todays quiz. Sounds like somebody's just hating on them because they missed one.

No, I got them both right, but I didn't think either of them are trivia questions.

The one I missed was a legitimate one that I should have gotten correct.

Oh. My. God. I LOVE polenta and anything that has to do with polenta-and cheesy polenta? Again, Oh. My. God. That looks amazing. What a great present! You must be a very good boy Earl.

Of course, you know "Midnight Run" is my favorite movie. I order chorizo and eggs anytime I see it on a menu.

I've never had polenta for breakfast. There's probably not a whole lot of breakfast places here in the Midwest that serve polenta.

Congrats. You've just been given a very unimportant award on my blog.

Avitable - I agree. Questions like that don't pop up that often, but whenever they do I feel the same way. Not trivia at all.

Zibbs - When I was in college I pretty much ate pizza and Ramen noodles. Not together...that would have been awful.

Evyl - I love me some Huevos Rancheros. Yumm.

Avitable - I missed one of them and another more legitimate question. But you are right...those questions suck. I don't write 'em, and I don't pick 'em...I just pick the topics. Usually the questions are better than that.

Candy - It was truly delish!

ajooja - I did know that was your favorite movie. And you've seen chorizo and eggs on breakfast menus? I'm jealous.

Heff - Oops! Missed you there. Breakfast is my favorite thing to cook, so I really should have just made it for myself at some point. What are you gonna do?

I love chorizo! How cool that you got to have your "special" breakfast, made by a family member! That food obsession is well known here and is how I started making ratatouille. LOL. It is made often now in our house because it is easy and delicious!

I do like to think that Grodin's character got his meal at some point anyway.

Scarey... I have been looking for "REAL SPANISH" Chorizo's to make my Spanish Bean Soup and heres your post about Chorizo's.

They don't have the real stuff here in MN, now Sandi has to ship me some from Texas.

i dont come here for 3 days and suddenly i'm behind in some contest...

this all seems like too much pressure for me.... i'm punching out, maverick...

Awesome story. Kinda what it's all about...the whole ride.

This is an awesome post! You received something special for your birthday! Not a thing, but something that was thought about and made for you!!! How special!!!

I have to say breakfast foods are my favorite!! It's all good!!!

Have a great day!!

Slyde - It's like an everyday thing. There is a cumulative score, but that changes every month. C'mon Iceman, be my wing man.

Michelle - Breakfast is the bomb-diggity. OK, I promise never to use that phrase ever again.

So many different kinds of food I've never had. Feelin' hungry tonight.

Faiqa - I highly recommend it, especially the creamy, cheesy kind. Yum! Just not with pancetta for you, since you don't dig on swine. :)

4Leaf - Breakfast is good food anytime of the day!

Yes, but what about a Gook in a Ditch???

This was my favorite movie of this time period until "The 'Burbs" came out the following year. I didn't know what chorizo was but Grodin made it sound so good I went out and bought some. I wasn't disappointed. I was lucky to get it from El Rey in Milwaukee. They make it fresh. :)