Growing older, but not up!

Remember when I said I was gonna do an entire week's worth of posts on punk rock this week?

For now, at least. I started writing the first post and it was just taking too long and it wasn't what I really wanted to say. So I'm gonna take a little break from it and I'll revisit it later on. Maybe next week. Gabba gabba gonnadoitlater, okay?

So instead, you get a silly drinking day wish that I've always wanted to do. And a little back story.

I officially become one year older on Tuesday. 42. Gia asked what I wanted to do that day and my first thought was a Five Boroughs Booze Challenge. Yeah...most of my ambitions have to do with drinking. I should probably look into that. (Insert snide comment from Slyde here) Anyway, this would be a version of a pub crawl, but you have to have at least one drink in each of NYC's five boroughs. Queens, Manhattan, the Bronx (why does that borough get a "the" in front of it?), Brooklyn and Staten Island.

I figured we could take the LIRR and stop in Woodside in Queens for an Irish breakfast at one of the ump-teen Irish pubs in that area. Then hop on the trains and work our way up to the Upper East Side in Manhattan for a cocktail somewhere around there. Then the 4 train up to 161st Street in the Bronx and the Yankee Tavern. We kinda wanted to see how the new Stadium is looking anyway. Then the D train back down to the West Side where we would stop somewhere for a libation. Onward to the Staten Island Ferry where we would have a beer on the ferry, maybe walk around the terminal for a bit and then hop back onto the boat heading toward Manhattan. Hanging on Staten Island isn't something I really wanna do anyway. Finally we would head into Brooklyn, maybe Park Slope or Williamsburg, and finish up our day at one of the thousands of bars in that borough.

Sounds easy, but when you start to map it out figure out which trains, subways and ferries to take...well, it started to sound pretty exhausting. So I decided against it. I'll do it with the boys one of these days, but Gia and I are gonna just do a simple dinner someplace and then maybe go for cocktails at this joint. Maybe I'll give absinthe another try. Maybe try it in Ernest Hemingway's Death in the Afternoon. That sounds fun. 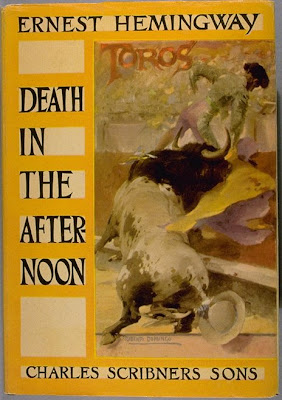 Happy b day to you Mr. Earl.

Good luck with the absinthe. Let us know how it goes.

Happy Bday. That booze challenge sounds great. I did the Erin Express pub crawl a few times. Drinking from noon until midnight. Crazy.

You know you're getting old when a bender begins to sound like a lot of work.

How DARE you try to have a life when you promised Blogistanis a punk series? REVOLUTION!! No takers? Hmm. Happy Birthday, Earl. :)

It was actually quite a Punk move to switch gears like that and go drinking instead.

Happy pre-B day. If you'll willing to take Metro-North up into the FC, I'll buy you a brew.

You could just do the Five Boroughs Booze Challenge by visiting all the boroughs in google maps. That wouldn't be as hard. And by the end of the night who knows where you would be taking shots. Alaska? Russia? Cuba?
It would be crazzzy!

Happy Birthday Earl! I will join you in no less than 2 weeks. Does it suck really bad?

Holly - You will get a full report on the green fairy. If I survive.

Steph - Tell me 'bout it. But, to be a little honest here, I switched plans because my gal can't really hang with me when it comes to a drinking day like that. She would have faded before we made it to the Staten Island ferry. ;)

Faiqa - A good punk rocker will stand up to authority and never do what is expected. Right?

why would you get a snide comment from me?

i think drinking is i fine way to celebrate you turing so damn old. it helps you forget it.

p.s. they sell alcholol here on long island too..

I like your drinking in every borough idea!! But, i got tired just reading about it! The bar you picked sounds very cool.

You know i've never tried scotch! Any thoughts? Is it like the kind of stuff you drink and it burns all the way down your throat into your stomach?? Cause if so, I'm so there!!! :O)

Have a great birthday dude!!!

Slyde - yeah, but I live here. Why would I want to drink here? Sheesh!

Michelle - Scotch is an acquired taste for some. I didn't like it initially, but I have found some that I really enjoy. I had a great one from Glenmorangie called the Nectar D'or which was aged in Sauternes wine barrels. It was extremely smooth...not harsh at all. So they are all different.

You, Me, the little ladies, and some death in the afternoon. I'll be ready to go around 4. Let's dance with la hada verde. This time for reals!

I refuse to grow up. I'm a ToysRUs kid.

WLC - Nice! You kids are gonna make it. Very cool. This place is supposed to be tight!

Evyl - I love that fucking store!

As soon as the light rail system gets up and running here in Phoenix at the end of the year, I am sure that lots of us will be doing the 3 city pub ride....Mesa / Tempe / Phoenix......the only way to do it now is to drive and that is way to f*ing dangerous here.