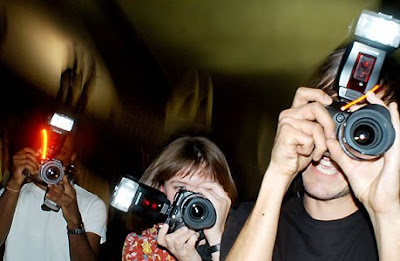 So I was watching the television with Gia the other night, and the two of us couldn't be different in our viewing habits.

I like reality shows like Survivor and The Amazing Race. She likes reality shows like the stuff they show on the Biography Channel or MSNB and CNN reports. I like TV shows like NCIS and Criminal Minds. She likes the programming on the Home Shopping Network. Oh, there are some similarities. We both love Dexter, The Office and a host of other programs.

But our biggest difference comes from those celebrity stalking programs (as I like to call them) like TMZ or Entertainment Tonight. I hate those fucking shows, and she loves them. LOVES THEM! She also reads TMZ and Perez Hilton on-line and she reads those crap magazines like In Touch. Horrible stuff. And yet I still love her.

So the other night on one of those programs, there was a story about Brad Garrett and an encounter he had with some of his paparazzi. The pap, a truly disgusting man, openly antagonized the big man and called him a whole host of stupid names. I mentioned how I felt about these stalking scumbags and Gia agreed wholeheartedly. I told her that the only way that they would go away is if we, the public, stopped feeding the fires by purchasing those trash mags, watching those trash shows and visiting those trash sites. She agreed.

But she just can't do it. Loves them too much.

Well I am here to promise you that I will never visit those sites, read those mags or watch those shows ever again!

Well, at least until the next time that Britney goes crazy.
Pissed in the corner by Verdant Earl at 12:01 AM

I'm not a big fan of reality shows. My own life is waaaay more interesting. But, I do LOVE DA CELEBRITY GOSSIP! Did you hear that Angie is pregnant AGAIN?

I like to think that I'm not a fan of celebrity gossip... but I am! I can't help it sometimes. I refrain from buying celebrity magazines but I always turn to Guilty Pleasures in the Metro and read the quick updates.

Just like I don't believe in horoscopes but when I read a newspaper I quickly scan my sigh... just incase xx

i saw that brad garett clip and once again the press disgusts me. They openly antogonize people (especially people who they know are close to popping, like britney or amy winehouse), in the hopes to catch some good video.

as far as celebrity gossip goes, i read tyler durden daily, but thats as far as i go. no perez or TMZ EVER for me...

Dude, we're in the SAME BOAT, here. I can't stand TMZ, or anything remotely resembling that type of show. Donna, on the other hand, can't get enough of 'em. I guess for some people it's like witnessing an automobile accident. You know you shouldn't look, but yet you can't turn away.

Faiqa - And that Brad feels trapped. ::hangs my head in shame::

Poopie - I hate knowing all this.

Jiggs - Mine too, but only if they ask nice.

Elise - Hey stranger! Didn't the celebrity stalkarazzi business start over there? I blame you! :)

Sorry, I gotta have my trash mags. Love them. Life would be so boring without them. After Diana died-I did make a pact not to buy them anymore. That lasted for about 10 months-which is good for me.

Not to worry, if anything really juice comes up on TMZ or National Enquirer, I will give you a heads up on the down low.

I have to agree with you though. In our efforts to feel better about ourselves, and our jealousy of the rich and famous, we tend to like it when they are suffering a bit. So unfortunately the papparazzi revels in that crap and does go out of their way to antagonize them. I totally believe the stars when they feel stalked and just because they are in the public eye, I don't believe they should have to sacrifice all their privacy. The paparazzi definitely have crossed too many lines. I think it's great that you resolve not to patronize those sites/mags/shows. I don't mind joining you for that.

Candy - I'm a little in love with Pauley Perrette on that show. :)

Bruce - Please tell me you don't read those rags or watch those shows!

Teeni said it all. I have nothing further. Out, or shall I say, "Arf."

But but but...People magazines sexiest man of the year issue just came out!!

I believe that TMZ is the missing Seventh Seal sought for by David Koresh.

Go to Stoparazzispray.com They are a rights to privacy org for celebrities.