You getting tired of these yet? Me too, but I have about a dozen more. Lots of shitty people and things in this world. I'll consider holding off on them just because it is the Holiday Season. Ho ho ho and all that crap. 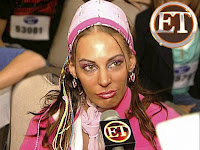 So I'm boycotting American Idol. Who's with me?

I haven't really watched the show in a while anyway. I think the only season that I made it entirely through was the season that that grey-haired dude won. He's a big star nowadays, huh? The music is okay. I mean, it's not my kind of music, but it's perfectly acceptable. That's not why I stopped watching.

It's the first few weeks of the show that I find reprehensible. Now I know that they feature a bunch of people who are just idiots who want their 15 seconds of fame. Some people will do anything to be on television. Even if the world is making fun of them. But I couldn't help feeling that there were some people who were on the show that genuinely thought they were talented, even though they clearly weren't. And, even worse, some of these sad souls seemed mentally unstable at best.

The producers of the show seemed to be crossing the "making fun of retards" line that is about as funny as a train wreck. Sure, some people are gonna tune in for the train wreck, but at what cost to their soul (or whatever the equivalent is for the non-religious). The show was just getting mean, in my opinion. And one of these sad sacks was gonna kill themselves over their treatment on the show some day. You just knew it.

Nobody knows for certain why Paula Goodspeed killed herself in front of the home of Paula Abdul. What we do know is that she either stalked Abdul or was dangerously obsessed with her for upwards of 17 years. Abdul claims that she had restraining orders out for Goodspeed at various times during that period. Abdul blames the producers of American Idol for allowing a potentially dangerous person who clearly was deranged so close to the object of her obsession.

She should be mad at American Idol. We all should be. But not just for letting a dangerous stalker get close to Abdul. That is actually kinda fun. We all should be upset because they chose to look at the entertainment value of making fun of a mentally unstable individual rather than pointing that individual towards someone that could help them. They did it for ratings.

And now she is dead. And while we may never know exactly why, I have a pretty good idea that the "good-natured ribbing" that she took on American Idol may have had something to do with that. Sure, she was a whack job. But making fun of a whack-job in private (something we all do) is entirely different from publicly humiliating her in front of millions. At a time when she thought she was living her dream in front of her favorite person in the whole world. That is just sick.

The first few weeks of American Idol are the only ones I can bear to watch, but that's mainly because I love laughing at idiots. If some idiot has delusions of grandeur and decides to go on a national television show instead of trying out for local musical theater or something, I have no problem participating in schadenfreude. And if one of the morons kills themselves? Well, that's one less moron in the world.

I kinda agree with you and i kinda agree with Avitable!!! I only like to watch the first few weeks of American Idol. I find it quite hysterical and sad and ridiculous all at the same time!! What a bunch of idiots these people are! They deserve to be mocked and ridiculed. Don't they??? Or is it all an act??? Perhaps, they pick the people that are willing to act like idiots in the first place just so they get their 15 min of fame???

Have a great Monday!!!

P.S. I did feel badly when i read about goodspeed's death!

Kiki - in that pic, absolutely.

Avitable - The world certainly needs less morons, but when they start to target mentally unstable folks for the show (and they clearly do) then I gotta call fail. So I respectfully disagree. The show is evil. Big time.

i am ashamed to admit that i have watched AI from season 2 on.

i dont have as much of a problem of making fun of idiots as you do (thats pretty much the only reason why i hang out with you).

My big problem comes from the people who DRAG these idiots to the auditions (friends, co-workers), who keep telling them they have talent, and then watch as they get their dreams crushed.

I need to watch i. It's punishment for all of the terrible things I've done.

Slyde - you people are getting it all wrong. I have no problem with them making fun of idiots. That's my favorite past time too. It's the obviously retarded people that they make fun of that I have a problem with. You know, the ones who don't realize that they are idiots.

I have never watched one single episode of this show. Sometimes, I feel so alone on this planet.

Faiqa - you are a better person for never having seen it. There's a better phrase for that, I think, but I'm still kinda sick.

I hate AI. I watch the first week for the retards, though. As mentioned previously, I have no soul. After the first week, I really begin to despise the show.

That's a damn shame about "Paula Godspeed", she actually had a pretty rockin' bod. Again, I have no soul.

i come to you by way of michelle of raw foodie fame.

i'm in full agreement. paula abdul's safety is the least of the world's problems. the making fun of those who truly need help is like the assylums of old. for the financially and socially well-endowed's viewing pleasure and entertainment. seems we havent truly evolved all that much.

Idol has just run its course and has lost its edge. Most of the winners, sell few records and those are only to the tweens that haven't figured out how to download the stuff for free of the net.

Since I have no soul, I do watch the first part of the show (the auditions) just for a health reality dose of just how shallow youth culture is these days. It appears (based on the stadiums that they fill up for auditions) that a majority of American youth, are lazy, talentless, stupid, mentally disturbed, lacking in any social skills......and oh yes, they ALL think they are going to be the next Madonna....and in, this is their career path. I hope Wal-Mart plans on opening a lot more stores, since most of these folks will end up with jobs as greaters or stockers....

I agree with you. That is a sad story.

Heff - I'm with ya on the no soul part. Especially when it comes to a hot bod.

Dude - mind if I call you Dude? Love the avatar. Welcome! And yeah, this is not very evolved of us.

I have to admit...I cannot tell a lie...I am an AI junkie! I'm sorry and right on to you and your rant, you are absolutely right! I can't exactly explain why I love it so much but I do. I think I enjoy watching the Cinderella story happen right before my eyes..I'm such a loser.

I'm such a huge proponent of all the shit that went down with regard to this story that I've pitched a new show...and get this...it's been picked up by FOX!

Look for "SUIC-IDOL!" Hitting your TV screens this Spring after 24.

Candy - no need to apologize. Sounds like you like the show for the right reason. The good part of the show. That's ok.

I read where Fantasia Barino lost her upscale home. I guess being an Idol winner isn't all that it's cracked up to be either.

With you so far.

How about boycotting people who 'hate christmas'

I boycotted American Idol after they kicked Sanjaya off. LOL