*And I promise this is the last one. 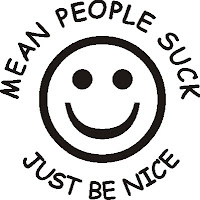 In fact, I'm gonna start right now. I'm not even gonna go off on mean people. Acknowledging that they exist gives them some kind of power, and I don't want to give them the pleasure of knowing that we are talking about them.

Instead, howsabout a story of a truly nice person?

So the other day, we were having a bad one. Had to do with one of the mean people that I've already decided not to talk about. So after a lot of crap we turned around and realized it was pretty late and we hadn't had dinner. Too late to eat out and we were both too tired to cook anything.

So I headed out the door to the local fast food joint. In a bad mood, frankly. I head inside because they always fuck you at the drive thru. There is one other person ordering. A woman about my age. She has two teenaged girls with her. It takes me a second, but I soon realize that there is something...off about her. She's mentally handicapped. I don't know if the girls are hers or if they are watching her, but she is definitely ready for the Special Olympics. And she can't find her debit card.

Great! Not only am I in a bad mood, but now I am gonna have to wait because Rainwoman over there can't find her fucking debit card!

Then she starts to freak out. Bad.

She thinks she may have left her card at home, and she is hitting herself in the head calling herself "stupid" over and over again. The girls try to help, but she is having none of it. I quickly glance at the bill and see it is only around $15 bucks, so I take a $20 out of my pocket to slide over to one of the girls.

But before I could do it, this incredible 19 year-old "manager" came out and talked her down. He calmly asked her what the problem was. He told her he leaves his card at home all the time and it is such a hassle. Then he tells her to write down her name and her phone number and she can pay for her meal the next time she comes in. She cried and told him that she doesn't drive and she wouldn't be able to get there for a few days. He told her that it could be the next day, the next week or the next month. Didn't matter, because he trusted her to come back. And he did this all with such a sincere honesty and calmness that it actually changed my mood.

A fucking 19 year-old working at a fast food place. Can you believe that? The way he talked that woman down was simply amazing. I gave him a thumbs-up after he was done with her and he just smiled and nodded. Doing his job.

That's a special kid right there. Good thing he decided a long time ago that mean people suck. Maybe he was just following corporate policy, I don't know. I just needed to believe right then and there that he was simply being nice.

I needed to believe that.

That's all I'm saying there Earl, right there.

Preaching to the choir!

That was an awesome story and I am so glad to hear of the behavior of that young man. He obviously has a very good head on his shoulders and a way of dealing with conflict. Also, he has his priorities in the right place. It wasn't worth the pittance amount of money to have a good customer stress out like that. Kudos to him - he deserves a raise.

If karma means anything, that guy is going to go far.

Teeni - He deserves a good woman.

Evyl - True dat. And I was such a selfish prick when I was that age. This age too, for that matter. ;)

Whew! I thought you were going to say that the girl wouldn't give back your 20 bucks.

I wonder if I could sic that kid on my web stalker? She's been by again with her usual abusive crap.

Lovely story.
Simple kindness of strangers never ceases to amaze me.
And somehow I don't think it was corporate policy either.

Beautiful story. It's a great post because we spend too much time on the other kind, those mean ones we're not talking about.

that is a great story.

yesterday with AI, today with mean peope. i see some sort of pattern here.

and yet, you've always been such a prick to me...

Aww Earlsie, I love that story. It gave me a nice "feel good" theme for my day.

That's how people pay it forward, and the best part is that he was a kid who showed some patience, faith and human kindness.
Myabe all is not lost!

That's so nice - thanks for posting that - give a little hope for humanity after all.

I think the dude was simply NICE, as it's hardly EVER Corporate policy to accept a drive-off.

Steph - what does she think you ever did to her? I can't imagine.

Expat - yeah, I think he was just a good kid.

Dude - yeah, the pattern is too easily found.

Slyde - well you obviously deserve it.

Paige - you are most welcome.

Heff - Since she was handicapped, I thought it might have been a policy. But you are right. Probably not.

Awww. That was such a nice story.

What is the name and location of the fast food joint? They seem to deserve some good-karma business from your blog readers.

Paul D. - Welcome! None of my blog readers are local, but it was a McDonald's here on Long Island.

b.e. dude this story reminds me of just how truly a good guy you are! You act all tough like make fun of "special" people, but really your a softy!!

I also loved this story! Makes me believe again!!

And that is why they should keep retards in cages. Sorry, that was politically incorrect...kennels.

WLC - speaking of retards in kennels, how is your doggie doing? ;)

WLC - that was low, even for you. Good thing the wifey doesn't read this. Tsk tsk. :)

Get his name and number. I want to try and get him hired as a director of a state agency here in Arizona.

I don't think i was that level headed at 19. Cool story.

My bet is on that lady not coming back.