Today's post is brought to you by the letter W. 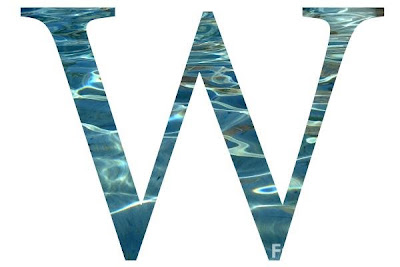 I couldn't sleep the other night. And you know what questions were banging around my head? "Why did someone come up with a letter that was a double U, but looked like a double V? I mean, was there a huge ancient preponderance of words that included a UU or a VV in them somewhere that a new letter had to be invented?"

That is what I was thinking about while lying awake. I've never claimed to be the most exciting egg in the basket. So I did a little investigating thanks to the Wikipedia.

Some W fun facts:
And so on.

In Italy it's pretty weird. There is no "W" in the alphabet but of course in the spoken language they have to accommodate it. They call it "doppio vu" which means "double V." Why it's not "doppio u" is the weird part because they have a "u" in the alphabet. But when referring to an internet address, they just drop the "double" part and call it "vu vu vu."

The letter W was designed on a Friday afternoon around 4:30pm. The sun was shining, the guys were thirsty, and all they wanted to do was get home.

So they fudged it... just like the very first Ford to roll off the production line.

They squished together the last two squiggles in the box, donned their caps and went out on the pish.

The rest is History.

Jimmy - For without a good W they knew there would not be a good Whisky. Smart fellas.

Slyde - of course you did. Four years of torture at RPI wasn't a waste after all.

The letter "W" has forever been tainted for me thanks to the former President of the US..

But "whiskey" helps, in so many ways.

It is the only letter to have a name in our alphabet.

Kate - I wasn't even gonna go there!

Heff - is that from something I should know?

I was going to say the first line of the post reminded me of good ole Sesame Street.

Anonymous really made me understand what you were trying to say Earl!!!

My brothers middle name is W. It's not short for anything. It's just W. Don't know what that has to do with anything, I just thought I would put it out there.

All the other letters just have sound demonstrating words for them. Like T is "tee", r is "are". W doesn't even attempt to have a demonstration of the sound it makes, it just describes the shape. That Like calling L "90 degree angle".

Ookami - gotcha, but sound demonstrating word could be "you", but doubled. Nah.

Had to be invented by a committee or focus group. Only they could come up with a piece of like that!

MK - Heya! Yeah, definitely sounds like something that came out of committee.

if sometimes i forget to tell you, i just love you!