We real cool. We
Left school. We

Lurk late. We
Strike straight. We

Sing sin. We
Thin gin. We

Gwendolyn Brooks (1917-2000)
According to interviews with Ms. Brooks, the last "we" in most of the lines is supposed to be said softly. As if the protagonists in the poem are pondering the validity of their own existence. 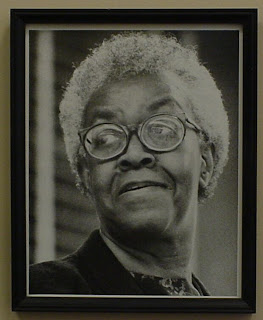 When I was in college back in the mid-late 80's, I was forced by an evil professor to attend a reading by Pulitzer Prize-winning poet Gwendolyn Brooks. What I knew about poetry back then is pretty much what I know now. It's an art form that has escaped me. That doesn't mean that I have, at times, been blown away by it.

That night in an auditoreum with about 250 students, many of whom probably wished they were any where else, was one of those times. I remember a friend of mine laughing at the poem above as read by Ms. Brooks. "How hard is it to come up with that?" he laughed. But he wasn't seeing it. He wasn't seeing the pain, the passion, and ultimately the futility of it all. I remember looking at this woman's face as she spoke. I remember thinking about how much it meant to her, and how much it must have meant to others.

And then the next day I forgot about Gwendolyn Brooks.

But every once in a while her words come to me while driving or watching a film or dreaming. This morning was one of those times. I awoke from a dream where I was reciting the poem to a group of students. Maybe most of them didn't pay attention either. I don't know. I woke up pretty quickly.

I wonder why some things stick with us. Maybe pondering a bit of my own existence every now and again. I dunno.

Weird Update: One of my favorite writers, Joe Posnanski, wrote about poetry on his blog a little while ago. It's the only time I can recall him ever writing about poetry. At least since I've been reading his blog. Must be something in the wind today.

You make a very valid point.

Dude, you need to Air Horn a few people. Follow the link to my alter ego blog and get your Air Horn Award!

it is pretty amazing how the human mind is wired...

Your vagina is showing.

Jimmy - Do I? I missed that somewhere.

Avitable - But I tucked it in?

Slyde - You are just angry because you consider yourself young yet we went to college at the same time, old man.

Ha you tucked in your Va-Jay-Jay!!

Great poem. I love to sit and ponder what it means and the best part is it means different things to different people. Thats what makes poetry awesome!!!

I'm really not in to poetry, unless one of the lines involves the word "Nantucket".

Poetry has always been one of those - you have it or you don't - gifts. My mom has it. I don't. Not by a long shot. I've always been jealous of people who can put words together in such a way to evoke emotion out of people in a few simple lines.

Wonderful poem, Earl. Thanks for sharing.

Oh, and just because you went to college in the 80's doesn't mean your old. *evil look at Faiqa*

Callie - you tell her!

Candy - not sure it is my message, but thanks!

Becky - Well your point is up to debate, but thank you.

2. I don't think that it is a coincidence that you wrote the "do over post" which contained a lot of death, and had this dream so close together.

3. I disagree that this poem is about futility. I believe it is about the vibrancy and passion of a splashy life, with all the singing and drinking. And what makes life important, what makes all this worth life worth while is that it ends, that we all die.

and whether it be softly hushed or done with a loud explosion, it is all part of the act of living.

Gwendolyn Brooks was friends with the first lit agent I ever had and was well-known on the south side of Chicago in the... er... 70's...

Holly - 1. We were 18, so that explains his comment. 2. Oooh...good point. 3. I guess it is all up for interpretation, but I sense a hopelessness about the situation of the lives of these young people.

Back in school, that very same poem struck a chord with me too. I can only think it may be because it was the first time that an adult talked so bluntly about death to us.