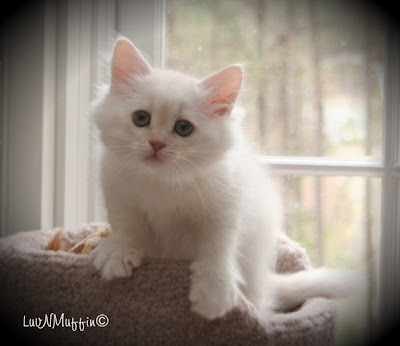 I know I was just complaining about the new kittens yesterday. Dumping water on the head happens, yo! Well, we aren't done with expanding the feline portion of our family. Meet Avery. He is a 9 week old Ragamuffin kitten who will be taking a long flight up from Georgia on May 9th to join us. Then that's it! We're done with cats. For a while.

Here's what happened. Gia was heartbroken when Sydney passed. In her grief, all she could do was look at kittens on Ragamuffin breeder sites. Problem was there are none local. Used to be, but for some reason there aren't anymore. She got Syd from a breeder in Connecticut, but they have since stopped breeding. So she found this one breeder she really liked and started communicating with her by email. Told her about Syd, shared some pics and some tears and she let us know about a few litters that she was expecting soon. A deposit was sent and Avery was born 9 weeks ago.

He is an only kitten. Huh? That sounds weird. What I meant to say is he was the only kitten in his litter. His mom was what the breeder affectionately called a "roller" meaning she wasn't fond of the feline sex act. Hard to breed. Avery is her last kitten as she is now officially retired. But another one of her cats had a full litter the week before so Avery has had plenty of playmates from the get go.

He is going to gradually add some color to the white, and you can see glimpses of it in the picture below. Maybe some champagne streaks to go with the white. However he turns out we are getting constant updates from the breeder about what a great cat he is. I wondered if it was part of the sales pitch, but we have already purchased him so she's got nothing to gain by exaggerating. We hope. 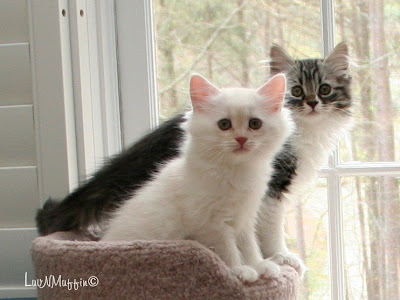 So why did we get the other kittens when we knew we'd be getting a new Rag in a few months? Well, karma I guess. When I took Syd to the Vet after he passed our two kittens (Wolowitz and Gogo) were there waiting to be adopted. And we were a little guilty to buy a new cat when there are so many waiting to be adopted at shelters. So we appeased our guilt with the twins and they are awesome! I have to download new pics of them from our camera later to show you. The distinct personalities on these guys crack us up. Gogo is becoming very attached to Gia and Sammi (our eldest cat). Wolowitz, however, is my guy. Especially while I am on the computer. I am alternately scratching his belly and typing this post right now. Everything takes a bit longer when he decides he needs to be stroked.

wait, so you drove to conneticut to get a cat?

How do they ship a cat to you from Georgia or are you driving down to pick him up?

aww! You're such a girl!

Avitable - the breeder is flying up with him. We are picking him up at the airport.

Holly - tell me about it.

oh man, he is seriously cute and i can't wait for more pics... and also more pics of the twins - you're such a cat person and i love that!

Three cats... I think I'm going into anaphylactic shock just thinking about it. And of course, all my daughter can THINK about these days is getting a kitten. That's a cute cat, and you aren't making it easy to say no. :)

For the love o' god.. even MORE water coming your way.

That's one lucky kitty. I'll bet the other two are gonna terrorize the crap out of him for the first few days.

Faiqa - Avery will make four. But I'm drawing the line at four. Unless we get a bigger place. :)

Candy - it's our old girl, Sammi, that I am more worried about. She took weeks to get used to the twins. Now she is gonna have to go through it all one more time.

Yeah, I get that too - when our Burmese lovely wants some fuss, she comes and sits on the keyboard and purrs.

My neighbour has just had a litter of 7 kittens (her cat, not her) and I'm dying to take a couple off of her hands. Solicitor put his foot down and said no :(

Avery is very very adorable and looks so cuddly!!! I wonder if Avery needs to be stroked. You know, like you do??

I can't wait to hear more about your kiddies!!!

Elise - lift that foot up and say yes!

Michelle - I'm sure Avery likes to be stroked. It's a guy thing.

Those Ragamuffin cats are the coolest! Avery looks adorable! Who knew you were such cuddly kitten softie? :)

love that you are a cat guy. i'm certainly a dog person, but it warms my little heart to know that you love those cats the way you do. congrats on your new addition. can't wait until we get even more photos! (hey, i'm not a cat person, but who doesn't like pet pictures?!??!)

Becky - I'm just a pet person. Dogs, cats, whatever. A friend of mine has to give up his two dogs because his sig other is allergic. Two gorgeous French Mastiffs (Hooch dogs). We'd love to take them, but holy cow! They are huge.

love mastiffs! tell friend to get sig other allergy shots and keep the pups. (easy for me to say!!)

AVERY! What a sweetie...and those champagne streaks! Your cat family = adorable.

Becky - dunno if she can as she is currently preggers.

Madge - Thanks! And you know cute cat families, having one of your own. :)

Those are some cute little kittens.

It's sad when you lose a pet, but it looks like you will be gaining some new feline friends here soon.