If you've read this space with any frequency at all in the past, then you probably know that baseball is a huge part of my life and it is my first and only religion. Gia and I are both die-hard Yankee fans from as far back as either of us can remember. I started rooting for them in 1973 to piss off the rest of my family who were Mets fans. Gia...well, Gia was born a Yankee. Literally. Her father was signed by the Yankees right out of High School in the early 60's and her parents had her while he was playing for one of their minor league teams.

Unfortunately he blew out his shoulder and he never got to play for the big league squad. But he pitched in Yankee Stadium, shared clubhouses with the likes of Mickey Mantle, Whitey Ford and Roger Maris, met Joe DiMaggio, roomed with Roy White and he pitched in a minor-league All-Star Game. Sounds pretty fucking great to me.

Anyway, that's not what this post is really about.

I've grown disgusted with the spending going on with baseball and with the Yankees, in particular. I know that the revenues are there, but it seems that the only ones who are getting screwed by the high costs are the fans. It is way too expensive to enjoy a day at the ballpark nowadays. I used to go to 30-40 games a year at the Stadium. Sure, a lot of times I had free tix from work, but I still would eagerly await the day that tickets would go on sale so I could pick a dozen or so games that I really wanted to see. In the past few years I have only been to a handful of games, yet I've tried to buy tickets for a bunch of games this year only to be denied by high costs and unfortunate ticket selling policies on the part of the Yankees.

Anyway, that's not what this post is really about either. 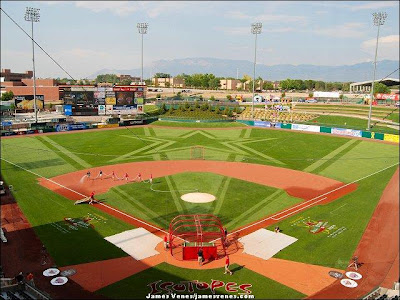 Isotopes Park, Albuquerque NM*
Gia and I want to move to a small town that supports a minor-league team. Some town that loves their minor-leaguers and comes out every night to see them play. Someplace warm and lazy where life doesn't move very fast at all. We want to drink cold beers on a porch swing as we wait for game time to approach. We want to casually stroll into town where a small ballpark filled with green grass and brown dirt awaits us.

We want to keep score and root for the home team. We want to see a fresh-faced phenom out of high school or college learn his craft as he pitches against a veteran trying to get back to the Show. We want to see kids with their mothers and fathers and grandparents eating popcorn and cotton candy and hot dogs until they pass out in their seats. We want to see the team mascot do silly things in between innings to entertain us. We want to fall in love with the game and each other all over again.

We want to sing "Take Me Out to the Ballgame" during the 7th inning stretch.

And we want to mean it.

UPDATE - Rob Neyer over at ESPN just wrote about the economy and its' effects on major-league and minor-league attendance this year. Kinda interesting.

*We don't necessarily want to move to New Mexico. I picked a picture of this park because it has been receiving high praise since it opened back in 2004. And I know that I have minor-league options close to home. But the LI Ducks play an awful brand of baseball and we were looking for something a bit more small-townish than Coney Island, Staten Island or Trenton. You dig?

Now I wannae move with you.

build it and they will come...personally, i enjoy watching minor league or college , the players at these levels are all working hard to make the big league dream come true

move to pittsburgh. we have the washington wildthings (Independent Frontier League) and of course the pirates. not that the pirates would help you fall back in love with baseball, but at least it can be cheap to get in to the most beautiful new park in major league ball!

a small town would kill you...

I'd tell you to move to Norwich, where my nearby minor league team plays, but no one goes to the games and they're probably moving next year. Meaning I'll have to drive to New Britain for games, and no one should move to New Britain.

There's a good minor league team in Chicago called the Cubs. You'd be the only fans there actually watching the game what with all the 401k and real estate deal talk, but you wouldn't have to worry about the pressure of post-season play. And every once in a while you could come to the southside (when the Yankees are in town) and still see professional baseball once in a while!

Tulsa sounds like the place for you. the metro is around 1 million people, and we have minor league sports teams for all four major sports. Our arena football 2 team (Talons) and Central Hockey League (Oilers) just got a new arena that is bigger than Kansas City's new arena. Our minor league basketball team (D-League, 66ers) plays in the new event center. And the Drillers (Texas league) has started work on building a new downtown ballpark.

Also I believe that we have our fair share of porch swings. :)

One downside: After with "Take Me Out to the Ballgame" they sing "Oklahoma", I hate that song.

Jimmy - We'll put up a bunk in the loft for ya.

2abes - I HATE college baseball. Aluminum bats need to go away. Far away.

Becky - the stadium in Pittsburgh does look lovely on TV. And the talent level is like the minors there. ;) But yeah...too cold.

Slyde - I dunno man. I may be mutating again.

Limpy - I don't know where any of those places are. Connecticut?

Heff - it is diggable.

RW - I dig Chicago baseball with a passion. If you sit in the bleachers at Wrigley there are still some fans who are watching the game. And I truly loved my one experience at the new Comiskey. Nicest people and great food. I love Chicago. Just not as much as New York. We have better pizza. ;) But let me ask you this? Is Reunion going to be a big enough town to support a semi-pro baseball team? THAT would be cool.

Ookami - the other sports don't interest me, but the Driller sound cool. They are moving to a new park in the downtown area in 2010. What do you think of the move from midtown?

You could move to Sacramento, and watch the Rivercats play. The field is nice, it's not cold, and we are the 2008 Triple A champs.

But, you'd have to deal with California politics. I wouldn't wish that on ANYONE.

Callie - would you believe I've never been to Cali? Nope. Never. Never really wanted to either.

When we lived in Burlington, Vermont we would go to minor league games and watch their mascot Champ, the Lake Champlain Monster, run around the field, tease the players and play games with the kids for prizes. It is a much more relaxed experience than major league.

Leslie - Heya! That does sound like fun. Champ. Ha!

You have just described the Portland Seadogs in Maine.

I personally think that their current stadium is fine (and it not old at all), but if they do as good of a job on the new ballpark as they did with the BOk Center then I am all for it.

Kate - except for the warm weather in Spring, eh?

Ookami - I hear they just recently broke ground, so...

Still, I understand what you mean about following a minor league team. We tracked down the Cardinals' rookie league team a few years ago while taking a road trip and it was great.

The ballpark was like the one where our high school team plays. The players weren't much older.

Thing is, they were "property" of the Cardinals. Instead of keeping track of the newest minor leaguers through boxscores, I got to see these guys in person. I'm sure you could really get a connection to a player if you saw him as a minor leaguer.

Seals - Yeah, the Yankees have a A ball team in Staten Island we are going to go see in June when they start up and a AA team in Trenton, NJ - which isn't too far. Their AAA team is in Scranton, PA as well. Only about a 3 and 1/2 hour drive. Maybe we will hit all three this summer. The Yanks have a pitcher named Dellin Betances who I have followed since High School that I would love to see pitch. He's 21 and 6'8". Pitching in Tampa A+ ball right now, but maybe he will move to Trenton or even Scranton later this year.

sadly I've only been to one game in my whole life. I prefer to watch baseball on TV where I can actually see the players faces without having to sell my liver and my first born son to afford the seats.

You are discussing a topic near and dear to my heart. I have to throw my weight behind the Tacoma Rainiers. Cheney Stadium is an older AAA ballpark that is really out of date with newer facilities, but it's a great place to see a game. They have a core group of passionate fans and occasionally get really good crowds, they are a Mariners affiliate and are 30 miles from their big league team. I love going to games there. Also, Everett Aquasox games are great. One of my favorite ballparks, but they're short season.