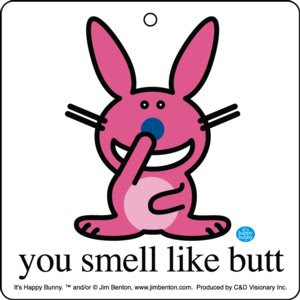 One of those times was one of the worst days of my life.

One of the women in the department came into my office one day. She sat down and told me that I had to talk to one of the guys who sat near her. I had to talk to him about his body odor. She said it was so bad that she had a difficult time getting through the day. I told her that I would have a word with him.

Then another person came in with the same story. Then another. Then another. In total, five people came in to tell me about this guy's stench. I guess I had to say something, right?

So I went to our Human Resources Department to talk to our HR Manager. Now, you know how Michael hates Toby on The Office? That's the kind of hate I had for this woman, but even more so. She was useless. She was stupid. She was literally the worst person I have ever met on Earth. She used to go into our Payroll Department and complain to the ladies about her vaginitis. I don't even know what that it, but it sounds pretty bad. Certainly not anything that should be discussed at the workplace.

So, aghast at the possibility that I had to tell this guy that he reeked, I went to this fucking awful person for advice. Maybe she could have a chat with him instead. Hey, that sounds like a great idea! But no. As I said, she was useless. She told me to ask him if he showered in the morning. If he said "yes", then I was supposed to ask him if he used soap.

So I put it off as long as I could. I waited until the end of the day and I asked him to stick around for a few minutes after work. Told him that I had a report I needed his help on. Ugh.

So he comes in and I ask him to close the door. I just blurted it out. Told him that I've had a few complaints about his body odor. He was mortified. I mean he was fucking crushed. He asked if it was just one or two people and I had to tell him that it was more than that. He couldn't believe it. Just sat there in stunned silence.

Then I asked him if he used soap.

I just wanted to die. I'm sure he would have been happy to join me on that ride. He said he would take care of it and he excused himself. I immediately left and headed to a local pub to try to forget the incident. I never said anything to him again about our meeting, and he never did either.

But about a week later I came into work and there was a card in an envelope on my desk. It was a Thank You card from the five employees who asked me speak with their smelly co-worker. They knew how mortified I was to have to tell this guy that he smelled bad, so they just wanted me to know that he no longer reeked. It didn't make me feel any better. I would have preferred that they just lived with the stench and left me out of it.

I shredded that card right away and tried to put it all behind me. Apparently, I haven't.

What's the worst conversation you ever had with an employee/co-worker? (UPDATE - besides having to fire them, of course. That's always awful - Earl)

yeah so, working with women and their delicate feelings . . . blah!!!

We were in the dining room, helping the alzheimer's patients eat, (basically feeding them). Not a place I expected to get blindsided.

And while the comment took only a few seconds to say, she stewed for three weeks before she approached me. all yelling and bitch this and bitch that . . . .

seriously she just ripped me a new one with crazy eyes and gesticulations and loud voices and everything.

my heart was beating so fast, i was starting to see white, almost passing out i was so freaked out!! I am a meek person earl, i do not hold up well under fire. Well, i do now, but back then, i was bearly a fetus, i had no game.

i still remember her bleach blonde hair and black roots. and she was dumb and never going to be a nurse. and her jeans were stupid with the ripped up seams and 800 dollar price tag. I believe the comment that lead to the confrontation, was something along the lines of

'for 800 dollars you would think they would sew up the seams a little better.'

i don't know, maybe i had it comming.

either way. YOU DID THAT MAN A FAVOR AND SERIOUSLY DUDE, you are did a favor to mankind. I mean, wouldn't YOU want to know if your ass was all stinky??

Firing somebody... no matter how much they deserve it... it always the most difficult for me. Even if they're a dumbass that deserves it, they may have family back home who relies on their job.

That was supposed to be funny, right? I'm over here laughing like mad, and secretly hoping that I'm not a psycopath for doing so.

On another note, was the person from another country? Because a lot of people around the world are very clean, but don't use deodorant. I mean, Jesus, not anyone *I* know. But, I've heard stuff...

Anyway, we Americans are very fanatical about smells, I think.

As fo your question, refer to my standing mantra of "jobs are for losers."

You know as hard as it was to tell the guy, you still did the right noble thing. You did do him a favor since he had no clue right?

Your a good egg!!

funny story about an uncomfortable situation. You could have told the complainers to put some vicks on their upper lip, just like the coraner. Maybe the guy would have gotten the hint. BTW, theres a guy who sits about 2 seats from me that stinks. Not literally!

I'd much rather tell someone to use soap than fire them.

Holly - seems harmless to me, but I'm a dude.

Dave2 - Yeah, firing someone sucks. I've only had to do it twice and it sucked both times even though one of them truly deserved to be shot as well as fired.

Faiqa - No. As far as I can tell he was from this country.

Michelle - Maybe, but I was still mortified.

the owner of my company had to tell someone he smelled unpleasant (this was back before he owned this company). he said that the guy was grateful, had no idea, and went on to send him christmas cards every year, even after they no longer worked together. i would want to know. you did the right thing.

Is THAT why you started showering with him?


I remember that day..... i'll never forget how embarassed i was... its not my fault that my apartment didnt have a shower...

Becky - I guess. He never mentioned it to me again, so I don't know how he felt about it.

Slyde - you know exactly who I am talking about. We had a nickname for him that I am not going to repeat here after the incident.

My business had an elderly customer that unfortunately would visit us every 30 days, and he NEVER bathed - Wore the sme clothes constantly that had remnants of last month's breakfast on them. That type of guy. I mean, this dude was FOUL. I finally mailed him (no return address) a letter & a bar of soap. Bastard evidently ate the letter and sold the soap, because he continued to reek on later visits. Some people must LOVE to stink.

I had to tell a coworker her tits were too small.

I did have a friend that smelled really bad in 7th grade and my Dad talked me into telling him because my sisters couldn't even be upstairs when he was there.

Heff - we had another woman at work who had a disability that made walking a chore. So she sweated a lot and must have stunk. Because someone left a bar of soap on her desk one day. Ugh!

Zibbs - I've got another story I may tell one day about a co-worker with bad breath. Ugh again!

I used to work with a guy who reeked of garlic. Not in a "I just ate a spaghetti dinner" way but like he had bathed in garlic and brushed his teeth with it. It like oozed from his pores and smelled so bad you'd practically pass out when he stood next to you. He ended up getting fired. Supposedly they fired him for something else but I know it was really because of the stench.

Prunella - I had a woman who worked with me who smelled of garlic like that. Didn't mind that as much as bad b.o., but I can see where it could get someone fired.

WLC - I think I speak for everyone here, when I say...huh?

"She used to go into our Payroll Department and complain to the ladies about her vaginitis" LMAO! This whole post is a classic Earl!

Vulvovaginitis sounds like something that a woman would get while rubbing their vageeter on a foreign car.

The worst conversation with a co-worker is terminating them and then having to place them in handcuffs.

Wow...that must have been a horrifying experience. For you both.

But it all turned out ok right?

Oh man. I got all stomach-twisty reading this. Both for you and the smelly guy. Ugh. I can't think of any convo I've had that even comes close.

Aw, I feel bad for the guy AND for you for having to be put in that position. How awful. It must have been totally uncomfortable but I think you handled it the best way you could and you were classy enough never to mention it again. Your HR person really was totally useless though. She should have handled it for you.

Being put into that situation is hard. We had a programmer I worked with that never showered. It was such a bad smell, but finally my manager had to talk to him. It was very hard to do that, but we were glad that he finally got the message. It took over 2 weeks before his cube quit smelling.

If you have read my blog long enough, you know that all my converstations with my co-workers are awful....they just sort of all run together into one long, never ending monologue.