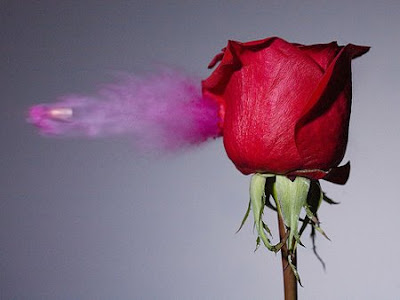 I haven't done a bullet post in quite some time now. I don't want them thar bullets to feel like I am denying them a place in my life. So here you go.  A rose for the lonseome bullets.
That's it.  Go home and have plenty of sex this weekend.  Dr. Earl has spoken.

I love Sam Elliot!
But I am shocked by Michael. He may have been a freak, but he was a musical genius.
Farrah - hotness. It is sad.
Can't watch movies with dwarves.

Sybil - anyone who loves Sam is alright in my book. In Bruges, Tiptoes, The Station Agent...all great movies with little people.

I think it's "dwarves." But, don't worry, Adam will be along any minute to impress us all with the right answer.

I've been wanting to check out "Saving Grace", but nobody would watch it with me. I find Holly Hunter strangely alluring.

And I just call them all Tattoo.

Faiqa - I'm pretty sure it is dwarves also. I was hoping to have a few read my blog, but if wishes were fishes...

Avitable - she's too small and way too skinny, but damn...something alluring about her is right! Check it out. Fantastic show.

Paticus - It got so-so reviews, but I liked it.

I'm gonna take you up on that last demand !!

Say what you will about Jacko, but he DID thrill us one last time. Holy SHIT, what media coverage !!!

Heff - I'm doing my best to ignore the media this weekend. It's gonna be all Wacko all the fuckin' time. And if you thought he was a freak when he was alive, just wait until you hear the stuff they are gonna say about him now that he is dead. Yet I will still manage not to care.

when are you going to admit that you only rented a movie called "tiptoes" because you assumed it was about feet?

Slyde - Nice try. For those of you who don't know, Slyde has been embarrassed about his own foot fetish for going on 15 years now so he always tries to assign it to me. It won't work.

methinks thou doth protest too much, foot boy!

just own it already...

Oh Farrah... so many lonely teenage bathroom moments I had.

Slyde - you are fooling no one. I could post a poll on your blog rignt now about the likliest foot fetishist between the two of us and you would be the overwhelming winner. Honest question: How many of your female readers have you complimented on their feet? I'm betting the majority.

Jimmy - I'm with you. Not in the bathroom with you, um, but you know what I mean.

You shared a few personal moments with that poster huh?

It is a great poster. We have it hanging in the garage where we play darts.

You have to admit she has great nips.

Zipps - I'm actually shocked at how tame that poster really was. I won it, by the way, at a Church game night. Go figure, eh?