The Ballad of Fluncle Bob*

*Or "The Etymology of a Nickname" 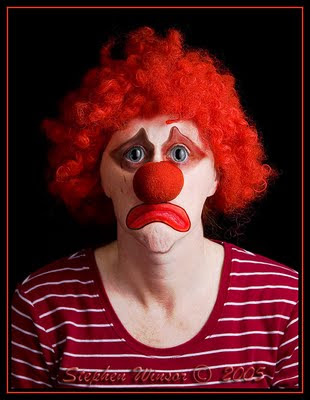 Let me tell you the tale of a dude I knew in college who had the rather unfortunate nickname of Fluncle Bob.  Now Bob wasn't really his name.  I'm changing it to protect the goofy.  And Fluncle is pronounced like Uncle, but with a "fl" in front of it.  Okey-dokey?

Anyway, I don't remember exactly how it started, but a few friends and I spent a great deal of time giving just about everyone we knew nicknames during our Freshman year.  Some of them were easy.  We knew a guy who lost his big toe in a lawn mower accident.  He nickname was short and sweet.  Nine.  Some of them took a bit longer to create.

Now Bob was a "friend" who lived in the same dorm as the rest of us.  I put it in quotations because he really wasn't a friend.  He was just a dude that hung around us due the randomness of dormitory room selection.  And he was a doofus.  A real fucking clown.  In fact, he looked like a clown.  Red face.  Big nose.  Weird reddish-blond curly hair that looked like a shock wig.  All he needed was a little car and some over-sized shoes.

And Bob wasn't the only Bob in our little group of degenerates.  There was another Bob.  A cool Bob, or at least what passed for cool when we were 18.  Let's put it this way...cool Bob wasn't a goofy clown-looking mother fucker.

So what would we call this first Bob?  "Clown Bob" was kind of mean.  Especially since we wanted something we could actually call him to his face.  So I believe that I came up with Uncle Bob, a lazy bastardization of "Un-cool Bob."  Hey, gimme a break...I was just a kid!  So we began to call him Uncle Bob.  When he asked why, we just told him he looked like an Uncle Bob.  The clownish fuck just shrugged and accepted it.

Then he pissed off one of my friends one night.  I forget who and I forget why.  But my friend began calling him Funcle Bob that night.  Basically just a shortened version of Fucking Uncle Bob.  It was fairly common in that era for the lazy and unimaginative to throw an "F" in front of a word to shorten a phrase.  Think "fugly" for "fucking ugly".  Get it?

So he was Funcle for a while.  But it just didn't roll off the tongue like Uncle Bob did.  And we really needed something to stress how much of a loser he was.  So Funcle became Fluncle.  Short for "Fucking Loser Un-Cool Bob."  I know...it was a stretch.  But it fit like a glove.  Maybe because he looked like a clown and because Fluncle sounded like a clown's name.  A deviant, awful clown's name, but a clown's name nonetheless.

He even asked once how Fluncle came about and one of my friends, in a drunken fit of meanness, said "Because it's a clown name, and you look like a clown, Bob!"  That wasn't very cool.  Then again neither were many of my friends or I.  But Bob just shrugged and accepted it.

It was all over by then end of our Freshman year though.  You see, Bob was doing some of his fucking loser un-cool shit one night, and one of the other guys in our dorm flipped out on him.  Explained exactly why everyone called him Fluncle.

I'm shocked Bob didn't throw a punch.  He just kind of accepted it, shrugged and moved on.  I don't know if he was really upset by it or if he just didn't care.  I do know that we stopped calling him Fluncle.  Well, at least to his face.

Except for one last time...

Flash forward to a year or two after college graduation.  I was visiting some of my old college friends prior to someone's wedding.  We were out at a local bar the evening before and who happens to be there?  That's right...Fluncle Bob.  Bob hadn't been very lucky since graduating.  He wasn't able to find a white-collar gig anywhere.  Maybe because he looked like a fucking clown.  So he took a job at the local cheese factory.  And I had heard that he lost a thumb in some kind of workplace accident.  I shit you not!  He lost his fucking thumb in a cheese factory!

Anyway, I saw Bob shambling toward me in that awkward way of shambling that he always had.  Knuckles almost scraping the ground.  Well, nine of them at least.  I was gonna just pretend that I didn't see him, but I decided to take the high road.  At first I was gonna shake his hand, but I wasn't sure which hand was missing a thumb.  Because if it was the right one, well...it would be awkward.  For me.  So I just gave him the dude-code howyadoin punch to the shoulder.

And I left him standing there, dumb-faced.  Or dumber-faced.  His face was pretty dumb to begin with.  Never saw him again.  Didn't really care if I hurt his feelings or not.  Some folks were just born to made fun of.  Fluncle Bob was one of those dudes.

I sometimes wonder if he lost any more fingers to the cheese gods.  Then I yawn and realize that I don't really care.

Note: Remember to play the Bug-Eyed Trivia Challenge every day. Yeah...I was pretty much the same douche back then as I am now.
Pissed in the corner by Verdant Earl at 12:01 AM

You DO know that throughout the 90's, we all called you "dick-face", right?

I know very well how nicknames of old seemed to "evolve" over time.

Doggie - Thought you would appreciate it.

Slyde - that's okay. We called you "Ladyboy". Maybe it was because of all the cross-dressing you did back then. How did you walk around in those fuck-me pumps?

Slyde - You did a little street walking in them. Just sayin.

I just found out my friends used to call me "Horse-cock Johnson" behind my back. I'm outraged and embarrassed.

Doggie - I'm sure it had something to do with your "My Pretty Pony" backpack.

Funcle Bob got away lightly.

Someone I was at University with was known as 'Anthrax'. Until even a bunch of 19 year old sadists decided this was too cruel.

i think my favorite nickname (which I have never given anyone nor have I been called it) is panty waste.

it's gross and so gross all at the same time.

Wabbit - I always wondered why the band Anthrax were as popular as they were. Finally gave up the name after the events of 2001.

it is wrong how hard i laughed at that little exchange. seriously. wrong.

and i don't wanna be right.

later today when i ask coworkers how the cheese game is, or when i call em fluncle, i'm gonna totally pee my pants. so, ummm, thanks for that!

Earl....you are one stone cold dude.....if you ever end up face down in an alleyway with a knife in your back......I will be telling the police to look for the 4 fingered clown.....