I'm not a fan of little dogs.

I love dogs, but little foo foo dogs just drive me insane. It's like they aren't real dogs. More like Mini Me clones of dogs.

That being said...little Dexter here is pretty cute. 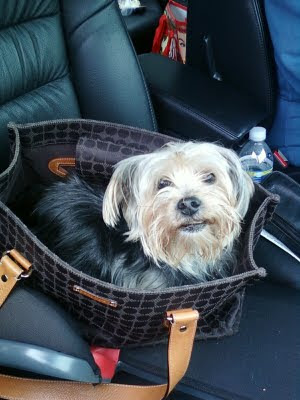 That's Gia's parent's dog.  In a handbag.  Because that's how he fucking rolls!  Hey listen, if you had the choice of being carried around every you went or actually doing it on your own I think you would jump right in that fucking handbag.  It's really the only way to go.

We are watching this little shit, erm, dog this week while Gia's folks are away.  Their 3 cats as well, but Dexter, of course, requires a bit more attention.  The cats pretty much sleep all day and we have to set up their food once a day, but other than that?  They are pretty self-sufficient.

Our cats have no idea what to make of Dexter.  They are mostly bigger than him so they clearly aren't intimidated.  And he is so self-absorbed (me, me, me) that he doesn't even acknowledge their existence.  So there is no hissing or snipping.  Just a lot of indifference and curious looks.

Note: Remember to play the Bug-Eyed Trivia Challenge every day. I feel like half a man when I'm out walking this little dude.  Seriously.

That's you hooked now pal. Just wait until you have to pull it off of your leg when you have company.

no self respecting dog, i don't care how little, should be toted around in a hand bag. Or wear a sweater. btw, i have a yorkie at home, it chases all the squirrels, rabbits and cats out of the yard.

I like little dogs when they have a big dog attitude. It's pretty funny.

I just got the visual on you walking Dexter....

Jimmy - we think he is asexual. Hasn't humped a leg since they adopted him.

2abes - birds could land on this dog's head and he wouldn't flinch.

Avitable - I hate those dogs the most, because they are often so yippy and loud.

Candy - it ain't a pretty sight.

I'm not a fan of little dogs either. I figure if I'm going to feed, walk and clean up after a dog, it should at least be able to rip someone's throat out if I'm being attacked.

Faiqa - at the very least!

wow, how are you going to balance taking care of all those pets with your busy working schedule?

i only have two hands so i can only have two dogs...they are 50 and 90 pounds (beagle / lab mix and a german shepherd). although if i ever lived with someone else i would get two more dogs...small (some sort of bagable terrier type) and extra large (great dane).

gotta tell you, i just can't see you walking that little thing, though. the picture kinda makes me giggle.
:)

Slyde - green is definitely not your color, my man.

Becky - Just for the comedy of seeing the real little dog and the real big dog next to each other, right? :)

not exactly...it is more like i want small, medium, large and extra large. actually, if i could handle the "yipe - yipe" of a really teeny dog i would so add extra small to that list.
:)

yeah, little dogs. when i think of getting a new dog I think i might be downsizing. We have more kids, less of a yard and less time these days. And Henry required a lot of yard, a lot of walks. And boarding him was an expensive task. Big dogs cost a lot for most everything.

Yet, we still have the love for the canine friends. Because dogs are comedy 24/7. One cannot get enough of comedy my bloggy friend. The questions is, how best to give our love?

So we (ok me but Mr. Hall will be informed soon enough), are thinking small. Yet we both disdain of the tiny yappy type pooches.

he looks like an old english fellow.
thought you might've needed my opinion there...

Holly - a Frenchie is a good choice.

I love picturing you walking that dog... That really made me laugh. Thank you. :)

Hard to resist a dog that's smiling at you.