The Most Wonderful Time of the Year!

Playoff baseball in the Bronx. 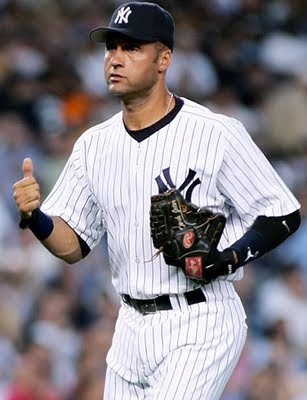 I swear to God(dess) that I never thought I would ever post a picture of Derek Jeter on my blog.  I've always been a fan, but he always was the favorite player of 12-year old girls.  While I rooted for real men like Bernie Williams, Paul O'Neill and David Wells.

And he delivered.  At 35 he had one of the best offensive seasons of his career while playing outstanding defense at shortstop.  And then he passed Lou Gehrig as the all-time hits leader for the Yankees.  Lou fucking Gehrig!

Note: Remember to play the Bug-Eyed Trivia Challenge every day. And a quick "fuck you" to Red Sox while I'm at it. Not to their fans (Candy), but just the team.  Okay?

If I've said it once, I've said it twice. Derek Jeter makes me wish I had female genitalia. Lady parts if you will. And I will...someday. A gender confused man can dream.

Doggie - Then you could play in the WNBA. With your height and your hook shot...C'mon!

regardless of the sport, if pittsburgh ain't playing, i ain't watching. (well, i'll watch college football, but that is the only exception.)
that being said, for you and gia i will secretly be a yankees fan in these upcoming games.
i feel a little dirty about it, but my love for you two is enough to get me through.

Sybil - Doesn't make you a bad person. Not really.

Becky - Aw shucks! Aren't you the sweetest? I know some older Yankee fans who still hold a grudge against Pittsburgh for beating the Yanks in 1960. Me? Wasn't born yet. Not my era. Bygones and all.

Zibbs - I could handle an East Coast Series. Yanks vs Phils. I think the glitter matchup, however, is Joe Torre's Dodgers vs the Yankees.

Jeter....Jeter, refresh my memory again....he is sleeping with which Hollywood star and did what type of steriods when? (He is a Yankee, one of these shoes has to fit.)

Bruce - No steroids for Jeter, but he is dating/engaged to starlet Minka Kelly. From TV's Friday Night Lights. One out of two ain't bad.

I don't get baseball and I don't get why people believe this man is so wonderful? He's just not that great-looking to me.

I seen him outside a bar in Minnesota on my 21st Birthday.. I pretty much fell in love.

That being said... I'm a huge Twins fan, and the Yankees pretty much tore us a new one. Luckily our beatings weren't a total ass kicking, and fairly close in all three games, but... with that final sweep at the dome, they crushed my Twins dreams.. :( Booo!

Kaylen - Well I can't speak to his good looks, but he is a fantastic ballplayer.

Brittany - Heya! Thanks for stopping by. Sorry about your Twinkies. (not really) ;)