My latest and greatest favorite is a little direct-to-DVD gem called Trick 'r Treat. How this film was robbed of a theatrical release, I have no idea!  Something to do with the creative team from Superman Returns and the competition from one of the many Saw flicks.  I still don't get it. 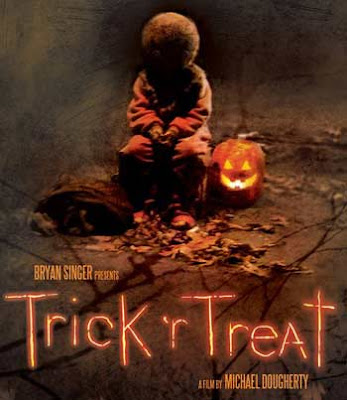 It's a horror anthology in the tradition of Tales From the Darkside or Creepshow, but with it's own unique style and gimmick.  I've read reviews from both sides of the afterlife on this one.  Good and bad.  It seems that a lot of horror film folks were a bit disappointed in it.  Thought it was overrated.  I dunno how a film that doesn't even rate a theatrical release could be overrated, but whatevs.

For me, this film worked best as an homage to the EC horror comics of yore.  William Gaines would be proud.  There is nothing particularly terrifying about the film, per se.  But it lives, eats, shits and breathes Halloween.  It feels like Halloween, in a way that so many films that have tried have failed.  One of the amazing things about the film is how beautifully it was shot.  The jack-o'-lanterns, the mist, the eerie wooded paths, the dream quality flashbacks.  It's a beautiful film just to look at.  And so much fun for someone who loves the holiday.

There is a bunch of stuff going on in this sleepy little town on Halloween night.
And then there is Sam.  A mysterious little trick-or-treater with a burlap pumpkin head for a costume.  He ties all the stories together.  In fact, since all the stories occur in the same town on the same night you can see many of the characters from every story in the backgrounds of all the other stories.  It's definitely a fun film to watch more than once.  Just for the stuff in the background.

Sam was actually first introduced to the world back in the late 1990's in an animated short by writer/director Michael Dougherty.  A macabre little piece of business called "Season's Greetings."  Enjoy!  And remember...not everyone is as innocent as they appear.

Note: Remember to play the Bug-Eyed Trivia Challenge every day. Smell my feet.
Pissed in the corner by Verdant Earl at 12:01 AM

Halloween is not my holiday. I love the candy and the dressing up and all, but I've never really celebrated it.

I think it has something to do with not liking being scared out of my ever living mind.

on dvd or cable? i would watch it

~E - but how often does that happen? Getting actually scared is so rare, but it sometimes makes you feel alive and wonderful.

2abes - DVD for now. I rented it via Amazon Direct Video and watched it from my Roku player on my TV.

Haven't seen that movie - but now I want to!!

Sybil - It just came out on DVD and it was never released in the theaters, so that's no surprise.

its ALWAYS feet with you.

i keep hearing good things about this one.. im in.

Slyde- it's a lot of fun, even if it isn't particularly scary. Feet.

You sell it well, I'll give you that. I'll continue my usual tradition at Halloween, by letting the dogs wander loose to greet those who try to get over my gates for free sweeties.

Jimmy - That's what the mean old man did in this film. Didn't end up well for him. Just sayin'.

Wow... I'm excited about seeing this! I haven't been able to really latch on to liking a horror film since the early 90s... since Scream. And that probably speaks volumes about my bad taste.

Faiqa - well, I think Scream was a pretty fantastic film. Gets a bad rap because of all the sequels and imitators, but I just watched it again last week and it is a really good film.

Mr Earl, it willnae end well for the little fecks who throw eggs at my windies neither.

ooh, creepy. I don't usually do horror movies, but the intersecting plots sounds interesting. And I liked the YouTube clip...