The Fall TV Season started a few weeks back, and because I thought you might be interested (you won't) I now give you my quick reviews of the shows I am watching this year.  Won't that be fun?  Sheesh...you could at least pretend. 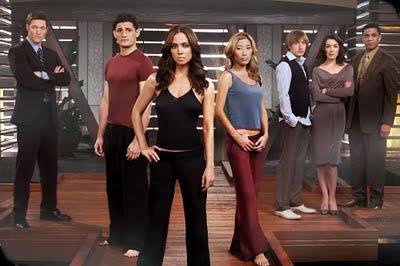 Note: Remember to play the Bug-Eyed Trivia Challenge every day. Boob tube...heh heh.  Boob.
Pissed in the corner by Verdant Earl at 12:01 AM

Dollhouse is definitely better this year. I haven't seen "Epitaph One" yet. I wanted to ask you if I should make it a priority to watch sooner rather than later?

how do you keep up with everything and still watch all these show on the tube. anyway you are missing a few reaaallllyyyy entertaining shows. Project runway, the two dance shows and glee. ok, my kids have commandeered the tivo and thats probably why i don't watch too much. luckily they also watch amazing race and survivor.

Ren - watch it IMMEDIATELY!!!! As in right now. Stop everything you are doing and watch it. Or, ya know, when you get a chance. But yeah, sooner rather than later.

2abes - Project Runway, the two dance shows and Glee? For a second I had to look to make sure this wasn't Slyde leaving this comment.

1.) Dollhouse is totally better this year. I am way more into it.

2.) If I didn't have a standing Thursday night date with a friend to watch Survivor, I'd have stopped watching it. It bores me this year plus Russell is a tool.

i will not be satisfied until Topher is disembowled... really.

my favorite tv line of the year was delivered monday night on big bang: i will take you out, i swear to cow. (i laughed so hard it hurt.)

i'm a female and can't bring myself to watch anything called "dollhouse" - i just can't.

Sometimes How I Met Your Mother has a couple of good lines so I watch it for a bit and then it gets to be a real drag so I quit again.

I still love NCIS. I Heart McGeek. NCIS LA however, BRUTAL! I agree Chris O'Donnell could make it work and maybe that psycologist, but the rest of the characters are flat.

What about Criminal Minds? Do you still watch that one?

Becky - That "swear to cow" line has us cracking up too. Love it when Raj gets fired up. My favorite TV line from the past few years (hat tip to Water Logged Canine) is from "It's Always Sunny in Philadelphia" courtesy of Charlie. "I will slap the face off your face!" Cracks me up!

Paige - McGeek is my least favorite character on the show. I'm an Abby fan. Sigh. And I still watch Criminal Minds most weeks, but I don't set the DVR for it. If it's on I watch it, but I don't obsess.

The finding the mother part of HIMYM is definitely the weakest part of the show and how Ted every gets any (including Sarah Chalke!) is mind-boggling. Howeever, all the other characters make the show worth it.

Uncool - Ted is so unlikable though. Almost so bad that it makes me want to drop the show.

How I met Your Mother is the dumbest name for a television show and I've refused to watch it based on that fact alone. I am very judgmental that way.

I have such a crush on Sheldon...

give it to me SHELDON!
i couldnt help it. when harry met sally.
the name always makes me smile.

These shows are awful.

Duder - Sheldon will do your taxes. He he he.

Doggie - Well, they are no "Big Brother" or "Celebrity Apprentice", but what are ya gonna do?

Just for you, I downloaded the first two episodes of the new Dollhouse season.

And proceeded to fast-forward through them, because... an abused housewife and then a mother... seriously?!?

Dave2 - Really? But have you seen the missing episode from last season, Epitaph One? For me, that episode changed how I look at everything with the show. Even Topher.

I am surprised you didn't review FlashForward......one of the more interesting concepts I have seen on television in a long time.

(I loved the first episode of the Amazing Race where the Yoga Teachers got bounced right out of the gate because they couldn't figure out a license plate.....and they figured it was just the zen of allowing others to succeed......Losers. )

Bruce - I watched some of the first episode of Flash Forward, but it didn't grab me. That's not saying I won't watch it some time in the future, though.

It amazes me how old man your taste in TV is. NCIS?

At least you have some NBC Thursday and Dollhouse in there to redeem it.

Avitable - Shocking, isn't it? Like a grown man listening to Avril Lavigne or something. Just doesn't make any sense. ;)