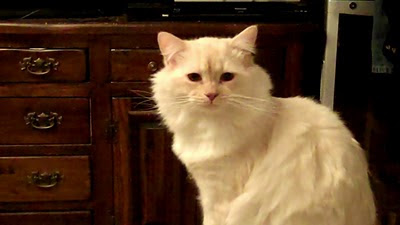 I haven't posted a picture of your youngest cat for a while now.  There he is in all his Ragamuffin glory.  Avery, the white rascal.  He turns one at the end of the month, by the way.  Feel free to lavish him with gifts and praise.  You can send them my way if you'd like. He likes, um, whiskey.

Anyway, like the rest of our animals, we hardly ever call him by his given name.  Sammi is more often referred to as Toonces lately.  Wolowitz goes by his professional name, Dr. Wu.  And Gogo?  Well, were weren't too original with her nickname.  Just added another "go" at the end to make it Gogogo.  I don't know why, but she seems more like a Gogogo than a Gogo.

So what do we call Avery most often these days?

Bootsy Collins.  Or just Mr. Collins.  Yeah, like the bass player from P-Funk.  This guy: 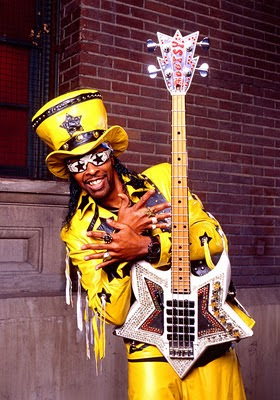 So how did our most un-funky white cat come to be referred to as a most decidedly funky black cat?  I'm glad you asked.

You see, Gia has a way of, ahem, talking to the cats in her, ahem, cat voice.  (Do NOT judge her!)  And she kind of makes up words and nicknames while she is doing it.  So "Avery" became "Abba-be".  And "Abba-be" became "Abba-butz" with that last part pronounced "boots".  From "boots" you can probably draw the lines to "Bootsy" and then one day I started calling him "Bootsy Collins" because I fucking rule.  See?  Simple.  Um, right?

Anyway, now he just seems like a Bootsy Collins to us.  He may not have his namesake's flair or his groovy bass technique, but he's as funky as he wants to be.

Note: Remember to play the Bug-Eyed Trivia Challenge every day. Avery isn't really white anyway.  More of a pinkish cream hue.
Pissed in the corner by Verdant Earl at 12:01 AM

Ha! I had a cat named Bootsy Collins!
By the way - I see the real Bootsy all the time, out and about in bars and at shows. When I dated this one guy (years ago), we'd see him all the time, dressed in full Bootsy get-up, riding a tandem bike with his wife down to this local store. We'd honk and he'd wave!
Also, most of the time I call Meatball (our cat) Asshole. Because he is one.

Yup, I have the cat talk, too.. and many names for the cats. Bootsy is a perfectly purrfect name for your Ragadoll. And B. Collins is da bomb!

Kate - You know, I'm not really sure what the differences are between a Ragdoll and a Ragamuffin. Ragdolls should have color points and blue eyes, I believe. And I think Ragamuffins are an offshoot and not officially sanctioned by shows, but who cares about that. Anyway...Avery is a Ragamuffin, and proud of it. :)

I firmly believe that you can name a cat anything you want...in the beginning, but it will take a while - weeks, months, maybe even years for their TRUE cat name to emerge. For example, my husband's former roommates have a beautiful cat named Karma whose name transformed into MUK MUK, and a very affectionate black furball named Lewellyn who now goes by Cho-Doh...

Our own cats Kozmo and Cinda: Koz's full name is "Kozmo MotherFucker", but it wouldn't fit on his tag, so then he was "KozmoMofo", and generally he just gets "Kahhz!!" (Ryhmes with KAHHHN!!! but with a very german sounding HHHhhhh with a z on the end)

Cinda's first name was "Princess Cinda" (from the Eewoks), then "Her Royal Majesty Princess Cinda", when she was a wee little kitten i called her "Cinda Loo Hoo Who Was No More Than Two".... which became "Cinda Loo Hoo" and now her real cat name is "LOO", but it took almost a year for "LOO" to come out as the name that stuck.

doesn't matter what you name a cat, it will only come to you when it feels like it. (says the girl who prefers dogs!)

pretty kitty, by the way.

Diva - that's awesome! I love the timeline of a nickname.

Becky - Our one exception is Gogo. She almost always come when I call her. Weird because she is our least social cat. Doesn't like to be handled and she if fine being on her own. But whenever I call her, she comes. If only for a little while.

Now that is how you name a cat. Get down wit chawl bad self!

We have all sorts of names for our cat. His real name is Rocko, but we call him Boy, Rocket Jr, Sandwich Head (yeah, odd, but it stuck after i flung a piece of deli meat and it landed on his head)

Bootsy is the man.

Marty - Oh, we weren't being clever with Toonces. Just stole it from SNL, actually.

I would say that is a lame-ass name for a cat, if it weren't for the fact that my wife has named our newest kitten Tuffurrs......(so I will keep my mouth shut)

Bruce - Tuffurrs? Yeah...I would keep my mouth shut too.

Why must I be like dat,
Why must I chase the cat?
Nuttin' but the dawg in me!

to asnwr your question; yes we ARE!

and that's a name to live up to.

Didn't realize there was a diff between Ragdoll and Ragamuffin. Thanks. Anyhoo. Cats rule, dogs drool.

Avery is beautiful! Interesting that progression to the nickname. My longest lasting and favorite cat, Peanut Butter, ended up just getting called Peeb for short most times out of pure laziness. Yeah, I know, not nearly as interesting as your cats' nicknames. But she was my baby so I'll just insert her into conversation any time I can. LOL. ;)