I love when there is science and stuff that scientists and stuff can't figger out. Or they kinda know, but they still haven't got all the stuff...ya know, figgered out.

Normally in a binary star system, you get two stars of varying magnitude that orbit around a common center of mass.  Now, I don't know what any of that means, but usually you got two stars doing some kind of celestial boogie around each other.

But something different is going on with Epsilon Aurigae.  You see, this mother-fucker is an eclipsing binary system.  And that means that every 27 years, it gets eclipsed by...something.  Something real big and something real dark.  And these science guys don't really know what that large something is.  Sure, there are all kinds of theories.  A large semi-transparent star.  A black hole.  Your mother.

But mostly they think it a large disk of dust that blots out the sky for anywhere from 640-730 days every 27 years or so.  That doesn't seem likely.  I'm gonna still go with "your mother" as the answer.  But wait...that's only part of the story.  During the middle of the eclipse period there is a period of brightening.  Like there is a hole or something in the middle of the dark object.  And that hole, like your mother, is getting bigger as recent evidence suggests.  So now some of those eggheads think that there may be a planet or even a smaller star at the center of this massive dark cloud of dust.

Well, guess what is going on right now?  That's right.  Epsilon Aurigae has begun it's eclipse phase and space nerds all over the planet are just tugging at themselves with joy.  And they are looking for our help.  So if you fancy yourself an amateur astronomer go check out the Citizen Sky project and you join them over the next couple of years for a prolonged session of theoretical star-fucking.

Me?  Well, I don't fancy myself an amateur astronomer.  But I do fancy your mother. 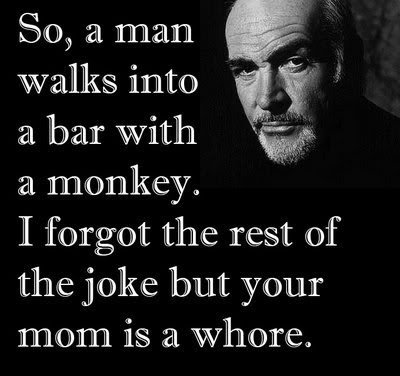 Note: Remember to play the Bug-Eyed Trivia Challenge every day. It's what Martin Luther King, Jr. would do.
Pissed in the corner by Verdant Earl at 12:01 AM

Hm, that's really interesting. i had no idea... that your mom was a whore! TREBEK!!

Diva - as a Canadian I know that you would appreciate the Trebek references. :)

Thanks alot. That gave me a visual of Shaq's black hole.

/science skills peeked in 5th grade
//as did debating skills

Jesus my spelling skills apparently crapped out in 2nd grade.

Limpy - Oh, I was peeking alright. ON YOUR MOTHER!

I'd say I had an intelligent answer but enjoyed somebody else's comment so much I forgot it but that would be a lie.

RW - It was really just an excuse to make Mom jokes. I'll be making fart noises here tomorrow. Tune in!

Don't nobody talk about my momma....

can you do proper blog about you momma jokes?

Earl, yo mamma is so po she has to but a big mac on lay a way!

Candy - I wasn't talking about YOUR mother. Just your mother. ;)

Holly - Wow. That was really inappropriate. I can believe you said that about my Mom. She's a saint! Tsk tsk tsk.

El Duderino - No, yours!

It was worth the nerd babble for the Sean Connery thing. :)

I love my astronomy with a healthy dose of vulgarity.

The other half of your hand.

I just... I have no idea what I'm supposed to say here.

Don't nobody call my mama a whore!!

Your mama so stupid, she thought Tiger Woods was a forest in India.*

*I did not make that up, by the way. My brain just isn't capable of concocting that kind of trash. Even if it is clever.

Faiqa - Wow...took me a minute to actually GET that momma joke. I must be tired. Tiger Woods...hehehe.

i tried...was it good for you?