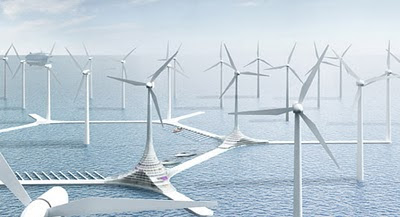 As a fan of science-fiction (duh!), I had certain expectations for living in the future.  And by the future, I mean 2010.  Some of those have expectations have been realized.  Gia does her job every day with her own Star Trek tricorder.  Cell phones, the Internet and programmable television are all neat.  But where are our flying cars?

Sorry, I digress.  Anyway, one of my own expectations was that our urban landscape would look a bit like the above picture by the year Twenty-Ten.  Great, innovative cities built upon the sea or other foreign landscapes like a remote mountain, Antarctica or the surface of the Moon.  Renewable energy powering it all.

Well, this dream could become a reality off the southern shores of Norway, according to some reports.  You see, the unique geography and weather patterns of this part of the world makes it an ideal candidate for wind power.  And some designers have taken it upon themselves to suggest an entire turbine city, run by the power of this wind farm.

At first the turbine city would be more of a tourist attraction.  Something to show off the potential power of this particular technology.  So it would be mostly hotels, shops, restaurants and the like.  But I can see it blossoming into something more.  Entire functioning cities on the technological edge, ushering in a new era in human living.

Too bad our own country is so reluctant to embrace the technology. And it's not just the government.  A proposed wind farm off the south coast of Long Island has been stalled mostly because some residents would consider the large structures to be eyesores.

I think they look beautiful.

PS - Now go wish him a happy birthday.  I command it.

Note: Remember to play the Bug-Eyed Trivia Challenge every day. Seriously...where the fuck is my flying car?
Pissed in the corner by Verdant Earl at 12:01 AM

T. Boone Pickens aborted his dream of harvesting wind in Middle America. Why? Because of reluctance to implement "new" technology. Also, natural gas has become cheaper. Flying cars. Renewable resources. You have mentioned the tip of an iceberg that I hope our near future rests upon.

If I could keep my lifestyle, and go off the grid, I swear to God(dess) I'd do it. But sometimes, I just want a chocolate malt.

Doggie- I'm down. Can we do chocolate malts this weekend? You got a favorite joint?

When I see that I see beauty - but then I see really messy hair...

Liz - we should all have futuristic personal force fields by now anyway. Those would protect your hair and little Prale's hair.

whenever i see a bunch of windmills spinning very fast, i always worry that i'll get my massive dong caught in one, and it'll hurt like the dickens....

We have banks of them out in farmland. People complain about the constant hum 24/7. These are always the same people who support Sarah Palin.

Slyde - Did you say massive ego?

RW - the Long Island project is proposing a wind farm 8 miles offshore. And people are still complaining about the sightlines. And yeah...I think the two groups of folks might be related.

i think it would be fucking sweet!!

Wind power/Solar Power - these things happen for FREE!!! Seems like a no brainer, doesn't it?

Funny you should mention flying cars, I just got an e-mail about that! www.terrafugia.com

Personally, I agree with you on this. These turbines and wind towers are very nice looking. They have a good consistent flow to them.

Plus, being able to generate renewable energy is always a positive, at least to those of us that don't consider the turbines an eyesore.

Suzi - Close, but no ceegar! Bit of a difference between a roadable aircraft and the thing George Jetson had.

Marty - I just don't understand those who don't appreciate their beauty.

my bd was three weeks ago. where's my well wishes?

well, go windmills and I am now thirty four. so yeah. good times.

Holly - Can't celebrate something if we don't know about it. Happy belated birthday! Woot.

apparently, you dont give a shit about the migration patterns of the zinglebarbed twarfledatters

Dude - and one would think with my green theme/avatar that I would. But I don't. Twarfledatters crap all over the place too! Fuck them.

I agree! Over here it is the Nantucket Sound that they want to put turbines in, but the rich people would be able to see them from their huge yachts so so far it is a no go.