I hate the Golden Globe Awards.  And as long as I draw breath, I'm gonna keep posting about my hatred of the Golden Globe Awards. This is my fifth annual posting of my original rant from Slyde's blog back before I even had a blog. I will not rest until everyone knows what a sham this event is. I may edit it from time to time.  Like replacing the old pic of Scarlett Johansson with a new one of Christina Hendricks.  You can't blame a guy for appreciating her...globes.  So enjoy! Or don't. And remember...don't watch the Golden Globes this weekend on NBC.  If only because they fucked over Conan. - Earl 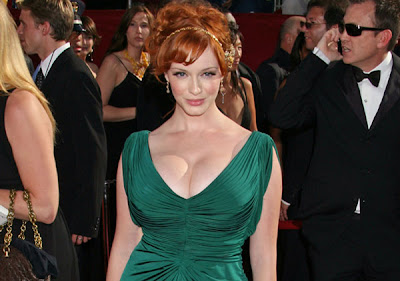 The HFPA is a non-profit organization of somewhere around 90 international journalists based in Hollywood whose purpose is to disseminate information about film and television to a world-wide audience. 90 JOURNALISTS! Are you kidding me? These 90 men and women are the only voices and votes for an award as seemingly important as the Golden Globes? Now don't get me wrong. The HFPA does some fine work, I guess. In 2005 they donated $1 million to various arts and cultural programs around the world in an effort to further the advance of the film and television. They also donated $250 thousand to the Red Cross. That's mighty white of them.

Where do they get the funding for their charitable work, as well as the funding needed to run the non-profit organization, you may ask? Well, they receive a sizable licensing fee from the networks to run their annual event...the Golden Globe Awards. They also receive licensing fees from various cable networks for allowing them to report from the red carpet. Hm-mm. So let me get this straight. The HFPA (all 90 of them) collect licensing fees from an award show that they run in an effort to award excellence in a field that is already swimming with too many awards. And they give out those awards in the award show that they sponsor, which in turn provides them with the revenue that they need to keep handing out awards the following year? Holy self-sustaining stroke-fest, Batman! And I thought I used to get confused with The Terminator and all of its time-line questions. Wait...how was John Connor born if he needed to send his own father back in time to be with his mother in the first place, and, and, and...system failure!

This is bogus, my friends. It's just another example of mutual masturbation that the media machine that is Hollywood has fashioned out of thin air. It made me sick to read about this, and if I ever see another weepy, blathering idiot of a winner (like Felicity Huffman this year back in 2006) crying about how this is the greatest night of their lives I may actually vomit on my television screen. "You really, really like me...all 90 of you! You really, really like me!" Actually, it's possible that only 25 of the members liked you, honey. Or whatever number of voters that is needed to beat out whomever came in second place. What a piece of crap award this is!

Once again, I applaud the charitable work that the HFPA does. But let us not kid ourselves. Most of the money isn't going to help poverty and starvation in Africa, or to help relief efforts in India Haiti. No, most of the money is handed out in the form of financial grants to cultural institutions to help further their own causes. There is some good stuff in there, but most of it isn't of the do-or-die type of relief.

Oh, and if you were wondering why we placed a picture of the stunning Scarlett Johansson (decked out in stunning scarlet, thank you very much) Christina Hendricks at the top of this article, it wasn't so that we could make some blatantly obvious double entendre about the Golden Globes and her outfit. I just think she's got some nice hoo-has.

Note: Remember to play the Bug-Eyed Trivia Challenge every day. Really...just an excuse to post that pic of Christina Hendricks.
Pissed in the corner by Verdant Earl at 12:01 AM

as a rule, i hate all awards shows. i just think they are boring.

but i have always hated the PRINCIPLE of the golden globes.. fuck em!

Savannah - just save more of your hate for this one, ok? :)

Slyde - the AVN awards aren't bad. The red carpet is a bit more fun with that one.

I didn't know any of this! But generally, I don't watch awards shows at all. They bore the crap out of me.

I disagree with your irritation here. I mean, it is what it is, this award so. Why does it make you huffy to learn it is mostly a self serving machine. I mean, are award shows suppose to have integrity? Are charity contributions suppose to be just and virutous?

It's a spectrum really. Pluses/minuses on the morality scale. But that is life though.

and btw. Yes, Joanie, a thousand times yes to the JOANIE!!!

Holly - What's my beef? I believe I outlined it in the post. I'm a fan of awards. Baseball awards, film awards, etc... I just want the voting to have some kind of integrity. The Oscars have well over 6000 voters. Same with the Grammys and such. In baseball the number of voters is less, but it still approaches 600. That's much more meaningful than 90 people. And when these "stars" act like the world exploded when they win one of these things...yeah, it bugs me. Because the whole thing is so artificial. The members of the Academy don't have that agenda. They aren't really involved in the production of the award show, at least most of them. There is no pretense of a charitable foundation. They give the Oscars to award excellence. Something else is going on here.

I really think the whole post is a tad harsh. With real tragedies taking place around the world at any given time, I personally think it's nice to have a little awards show, or late night talk show host battle, to help take our minds off of things. I mean, I'm very sorry for all of the people currently suffering in Haiti right now, but I LOVES ME SOME RED CARPET! I heard E! is doing a live event for 3 hours beforehand. 3 HOURS! I think I'll try that new Domino's recipe. I'm going to watch, and I want you to know it.

I'm gonna call bs on the whole idea that numbers of voters lends to integrity of votes counted.

For instance, I mean, let's say one person puts a 'love your blog' in the comments. Doesn't that feel awesome, and really, that's just one vote.

If nine people said, Mrs. Hall, your writing is the bestest, my world would explode.

I'm also gonna call bs on the agenda part of your comment. Everyone has an agenda Earl. Noone on this earth is without agenda.

We all do things for many reasons. Self serving reasons are fundamental to any action we do. Even voting. If it wasn't serving our purpose, at least in some part, we wouldn't do it.

So, really, I don't really think an award show is responsible for integrity in the way you are measuring.

and every time you post and respost, we, your loyal readers, will be reminded of your good taste. and laziness.

amora (my word verification du jour) is thiii-i-i-iiis close to amoral, no?

Doggie - I betcha you gonna watch it. With your pants around your ankles!

Holly - ::sigh:: Of course the whole "love your blog" comment is nice. But it isn't an international event. Ya see the difference? And yes I want the voting to have integrity and mean something. I'm sorry, but the Golden Globes doesn't have that. Let's just agree to vehemently disagree, okay?

Dude - Mostly the laziness though.

Stop arguing with Mrs Hall and check this out.

You know, we've learned something today...!

Hey now, if someone from England says, lurve your blog, then yes, that is an international event!

RW - I stand corrected. Although at least one of those definitions is applicaple. Hoo-has - something you really want. ;) And by all means there should be one thing we all agree on. Christina Hendricks has a great body!

I dislike the Golden Globe show too!

Hear, hear, well worth reposting. All of the awards shows are a farce. The Oscars were a much different animal all togehter when it was just a private dinner were stars awarded stars and the results were only known the next day in the newspaper. I don't ever really recall when an 'art' form was awarded medals once a year for who did the best painting, or pencil sketch, or watercolor. Mass Media has obviously evolved into something a bit different these days.