It's been a long time since I've turned in my comic-book geek street cred badge. I stopped reading/collecting close to 15 years ago now. It was an all-consuming passion for me back in the day. And I just gave it up, cold turkey. Much to the chagrin of my hetero life partner. But I've always been like that with my hobbies. Hot and cold.

I try to keep up with some of the comic-book storylines via the web. On the down low, ya know. Just because...just for scuz. But about a month ago, I made my very first comic-book related purchase in a long, long while. A collected edition of the first six issues of The Boys, by Garth Ennis and Darick Robertson. 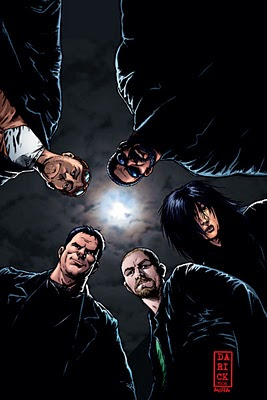 It's about a group of super-powered operatives working for the CIA who, urm, handle certain problems with a world in which sometimes superheroes need to be put down. And, as you would expect from Garth Ennis, it's super-violent and nasty in brilliant ways. The artwork by Robertson is pretty wonderful too. Even Gia loved it. I'm definitely going to do some catch-up work on the series, as most of it has been reprinted in collections as they do these days in the biz.

And now there is word that Adam McKay of Anchorman, Step-Brothers and Talladega Nights fame may be helming a film adaptation of the series. I'm down with that. As long as he doesn't recruit Will Ferrel to play Butcher. Yikes!

It'd be awesome if by "The Boys" these guys were just talking about their nuts. Tune in next issue to see what deep, dark, sticky mischief the boys find themselves in.

Doggie - Well, I didn't get into specifics, so maybe it IS about their "boys". Check it out the next time you come over. The book, I mean...not MY boys. Freak.

i seem to have missed this bit of graphic novel history completely, sugar. guess i'll just have to wait for the movie. xoxoxo

its not wise to ever say "talladega nights" and "fame" in the same sentence..

Savannah - It's still an ongoing series, but yeah...you can certainly wait for the film.

Slyde - Infamy? Is that better?

I'm a refugee from the Marvel Silver Age (60's to 70's) when the characters were full of doubt and self-loathing. Silver Surfer, Fantastic Four, the ORIGINAL X-men and Iron Man (his original suit looked like he was a freakin gold/yellow robot), Spiderman, The Hulk all came in that era.

I dropped it when I got out of high school. After the original Silver Surfer, nothing could be improved. And outside of the super-illustration and high tech printing process on glossed paper, nothing has.

RW - I was a Marvel kid myself. A little bit later on, but I read a lot of those you mention in reprints (which were big in the 70's for a while).

Here's something interesting for ya. In 1963, a comic-book was printed that told the story of a bunch of misfit superheroes who were shunned by society and led by a supremely intelligent man in a wheelchair. Sound familiar? The hero group was called The Doom Patrol and they first appeared in My Greatest Adventure #80 by DC three months BEFORE Marvel published X-Men #1.

Of course, the original Doom Patrol was inspired by the Fantastic Four (stretchy person, everyman/strongman, fire/energy guy, etc...), and the FF were in turn inspired by Plastic Man and The Challengers of the Unknown. The Silver Age was filled with stuff like this. Both Marvel and DC came out with a Swamp creature (Man-Thing and Swamp Thing) at almost the exact same time.

Sybil - It's good bathroom reading. Nothing like reading/watching someone beat someone else to a pulp to get the old bowels going. ;)

It's okay, but it's not his best work. I think he pushes the envelope just to push the envelope, and it seems lazy sometimes.