In yesterday's post about breakfast and longing (well, I thought it was poetic), I mentioned the film Midnight Run. Fellow blogger ajooja mentioned in the comments that it is his favorite film, a point I've read on his blog before on a couple of occasions.

It's always been difficult for me to name a favorite film. I love Dr. Strangelove, but then I love all of Kubrick's films. I love Jaws because, well...it's fucking Jaws man! I love The Princess Bride because it's so damned quotable. And lately I've loved The Departed just as much as any film even with it's many, many flaws.* Oh, and you all know how I feel about The Big Lebowski.

*C'mon. I love Jack, but as an Irish-American gangster? Not buying it. And nice coincidence that both protagonist and antagonist fell for the same unlucky woman. I get the whole Shakespearean drama of it all, but c'mon. But I do love watching Marky Mark give the finger to Matt Damon. And I can't get enough of Alec Baldwin. So I watch it. Every. Single. Time. It's. On. It's just so fucking good!

But I don't know what single film I would pick as my favorite. Too hard.

No. My favorite series of films?

The Substitute. And it's three sequels. 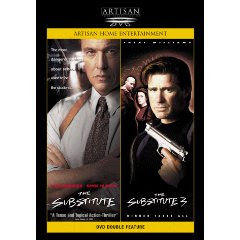 OK, OK...these movies kinda sucked. I know. I KNOW! But I fucking love them! I can and will watch them whenever they are on some shitty cable channel at 2AM. They are just so fucking bad ass. Want me to run down how bad ass they are? Let me start with the first film:
For those of you not familiar with these cinematic gems, basically the plot is a mercenary/special ops kind of guy goes undercover in some school as a teacher so to foil some kind of crazy criminal plot or to avenge the death/beating of a loved one. Something like that. But it doesn't really matter. The plots are totally beside the bad ass points.

And the bad ass quotient was kicked up a notch in the three sequels by replacing the bad ass Tom Berenger with the even more bad ass Treat Williams. OK, he doesn't LOOK any more bad ass than Berenger, but he smirks a whole lot more bad ass. Plus he was in one of the most bad ass films of all time. No, not Prince of New York. I'm talking about Deep Rising. Now that is a fucking bad ass movie that I've already written about somewhere on this blog. Total bad ass!

*Okay, sports fans...get a load of this. A top-notch college football program on Long Island called Eastern State University is secretly using steroids to bulk up their athletes. Now what is the really funny part of that last sentence? That's right..."top-notch college football program on Long Island". That shit is hilarious. Sure, Jim Brown and Vinny Testaverde and Boomer Esiason all went to high-school on Long Island. But they all went elsewhere to play their college ball. You know why? Because there basically is no college football on Long Island. We live in a dead zone for Division I football here. That's why Irish-Catholic kids like myself disgust the rest of the country by becoming Notre Dame fans...even if we don't attend that school. What else are we gonna do? Root for Boston College? C'mon!

Feel free to openly mock me with your words. Go ahead. I'm above it all. I know there is no substitute (see what I did there?) for these films. They fucking rule!

Labels: Bad Ass No Matter What You Say

Next thing you'll be telling us is that Eric Roberts is your favorite actor! ;)

Hilly - Holy shit! Eric Roberts IS my favorite actor!!! Pope of Greenwich Village, Runaway Train, Star 80, By the Sword, Best of the Best (I fucking love Best of the Best!!!), The Coca-Cola Kid...the list goes on. Did you see his cameo as the twins in the TV movie commercial in The Cable Guy? That man is a freakin' genius!!!

And I'm only half-kidding about all this. Seriously. ;)

So here's the fucking deal. Or at least my semi-drunk fucking deal. Why does anyone have to pick a favorite anything??? There are so many movies of so many genres. I could certainly pick a top 10. But the ONE and ONLY favorite. No fucking way.

I also feel like this about friends. I don't get calling someone my "best" friend. I have a number of friends. Some admittedly better than others. But I also feel like I get different things from different people. Somehow they all add up to one. Or some such.

The Departed is great. Lord of the Rings is too nerdy.

I'm partial to the Jersey Trilogy of Clerks, Mallrats, and Chasing Amy although I suppose that it is not really a trilogy now with Clerks II thrown in.

Evyl - There are six in the ViewAskewverse if you include Jay & Silent Bob Strike Back and Dogma. And I like them too, but I was kinda going for a more sarcastic choice here.

Most of my favorite films don't have sequels, but I'd probably have to go with Star Wars, Toy Story, or Clerks as my favorites. That's a tough one.

And, BTW, I just have a special feeling about Midnight Run. I wouldn't tell anyone it's the Best Movie of All-Time, but it's a good judge of whether or not someone likes good movies. If you don't like Midnight Run, you're dead to me. I'm just sayin'.

Never seen any of The Substitutes. I'd have to say it's a three way tie for me between Star Wars (IV,V, and VI), Lord of the Rings (I would totally marry Legolas), and the Harry Potters.

You know, I don't think I've ever seen any of the Substitute films. The last Tom Berenger film I saw was "Shattered" And even for that, it was years ago.

The Departed was a great film, although I admit that I would have preferred Scorsese win the Oscar for Good Fellas.

And let me just add that when it comes to funny movies, Waiting for Guffman is a masterpiece.

J.Hi - Heya! This post was mostly tongue-in-cheek. I liked all those films better too. But sometimes bad cinema is wonderful cinema.

Marty - Shattered was a long time ago. 1991. His last "real" film was probably his small part in Training Day back in 2001. All "B" movies now. But I did dig his Sniper series of films. Bad. Ass.

Zibbs - I prefer Best in Show, but Waiting for Guffman is hilarious too.

I haven't seen any of The Substitutes that I can recall so now I'll keep my eyes open for them. Oh, I gotta go play trivia!

This whole post is so over-wrought with sarcasm and lame-ness, that it is not even worth mockery.

You must have a treasure trove of old VHS classic snatched up from garage sales all around the Northeast.

In my humble opinion:

Best Film: Not easy, but for my money, Fellini's "8 1/2" (You have to watch it several times to really understand it and have a real love of cinema, the creative process, women and surrealism)

Best Series: "Jean de Florette / Manon of the Springs". Basically one long film cut into two segments, with a story line so well written and cinamtography so well shot, you will rush and buy a plane ticket to France once it is over.

Teeni - you really shouldn't keep your eyes out for them.

Bruce - Of course it was sarcastic. That was the point. Thanks for getting it. :) Too many great movies out there for me to pick my favorite. Way too many. I've seen "8 1/2" 2 or 3 times. Not one of my favorites, but I can clearly see how well it was made. As Fellini films go, I prefer La Strada, I Vitelloni and Amarcord more than 8 1/2.

As far as favorite series goes, I'd go with the Back to the Future trilogy.

Favorite movie would be very hard - I'd have to pick one from every genre.

You may dig Eric Roberts, but Star 80 was a horrible movie about the life (and Death) of Playmate Dorothy Stratten. Hell, the made for tv movie of the story was better.

Maybe it's just because I don't like that Hemmingway chick...

Avitable - I don't think I could go as far as picking a favorite from each genre. Best Comedy alone would make my brain hurt trying to figure it out.

Heff - Well, they were two very different movies. Death of a Centerfold really focused on Stratten herself (played by Jamie Lee Curtis), whereas Star 80 was more about Paul Snider. "Star 80" was the vanity plate on his car. And I thought Roberts was awesome and terrifying as Snider. But, to each his own.

B.E.Earl, thanks for writing about this, if for no other reason, for giving me the freedom to proclaim my love for the Stepfather series.

HA! I totally forgot about Marc Anthony being in that movie...have to watch it again.

Love Treat Williams and think he is sorely underrated. Fell in love with him when I first saw (isn't it, Prince of New York?) Whatevs-if Treat's in it, I'll check it out.

And...I'll forgive you for the BC comment...Jealousy is the tool of a weak person, Earl.

Biege - I only saw the first one. Weird seeing Terry O'Quinn as anything other than Locke from Lost.

Faiqa - It's not worth it...except if you love bad movies. Like me.

Candy - Ooops...My bad. You are right. King of New York was Christopher Walken. And I hate BC with all my being. Sorry.

Trust me, it makes the Poison Ivy series look like Wild Things.

Beige - Now the Poison Ivy series is one that I can get on board with. ;)

Ditto on The Departed. At least once every two months, I dvr it. Good stuff.

Well, I feel you on the picking one favorite film, I'm reduced to giving you my top five in each genre. Sorry, that's the best I can do.

Now, for the the other thing. I'm with you on the first subsitute, bad-ass like ten years ago, but may the fleas of a thousand camels infest your armpits for loving all of them as much as you do. Oh, and one more thing, I fart in your general direction.

Oh wait, if you liked the Substitute, you must have loved "Sniper". I knew it.

Joe - I got to the point where I stopped erasing it from the DVR. Just easier to leave it on there.

Poopie - I MIGHT be able to do a Top 5 in each genre. It would still be more thought that I wanna give to the process. And c'mon...they weren't so bad. Were they? Sniper ruled, by the way.

Whatever!!! They are now on my netflix queue!!! Should i move them to the top or what???

Hope you have a good one!! No make that a great one!!!

Michelle - you should read some of the comments above. I was mostly kidding about loving these movies. Mostly.

Sniper did rule. Can't deny that.

The Substitute series is in the on deck circle.

Poopie - The first one at least.

Some great movies in that list, thanks for reminding me about The Substitute, and in fact, I hadn't realized there was a third movie.

I have The Departed on DVD and watch that on a regular basis, of course, the wife hates my attempt at a Boston accent.