I think celebrity gossip/news might be the worst thing about living in the information age. Television shows that are solely about celebrity news and gossip. Websites that give us the scoop first. Even worse are the gossip-mongers themselves who have become pseudo-celebrities just because they know how to pay off a paparazzi better than the other guy.

That being said...here's a celebrity news story for y'all that just tickled me pink. 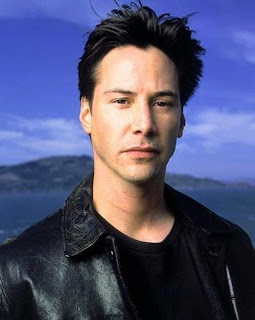 
So it seems that this woman from Ontario named Karen Sala is dead convinced that Keanu Reeves is the father of her four adult children and she is looking for $3 million a month in spousal support and another $150,000 in retroactive child support.  She is convinced of this even though Keanu Reeves has agreed to DNA testing which has proved that he is absolutely NOT the father of this woman's children.  Why?  Well, I don't like to throw around the word "crazy" about casually.  There are lots of geniunely sick people out there who have suffered even more in life solely because they have been labeled as such.  It's really not a nice word.

But this woman is fucking crazy.

Here is a small taste of the crazy that she is bringing, besides the ridiculous amount of money she is looking to get from Neo each month:
Come to think of it, maybe Keanu Reeves really is proficient in hypnosis.  I mean on a global level.  How else could you explain the success of Speed* and The Matrix films?

Note: Remember to play the Bug-Eyed Trivia Challenge every day. Keanu means "bad actor" in Hawaiian.
Pissed in the corner by Verdant Earl at 12:01 AM

Actually, I always thought Keanu was a very physically gifted actor. And, no, not because hes hot or whatever, but in terms of the way he moves physically. I think his voice and lack of intonation severely undercut this aspect of his acting, though.

Oh, man. I think his hypnosis affected me, too. Whoa.

Be excellent to each other and party on, dude.

Faiqa - My brain hurts after reading your comment. Must be the hypnosis working. The way he moves physically? Yeah...my brain hurts.

Keanu has actually been acknowledged by a fair number of critics as a good physical actor though a weak verbal one. It probably means something that the bulk of his acting awards/nominations were from foreign countries where his voice was dubbed over, and he seems to have much more international appeal than solely US-appeal.

Personally I agree that his voice is his main flaw in his acting. He's good at capturing characters and their situations in terms of body language, movement, gait, mannerisms; especially on more of a macro- than micro- scale, but once he opens his mouth it sometimes ruins the effect.

(slarmi is the word verification for this comment. Whoa.)

dude, he was perfect for the matrix series! (but yeah, sugar, that is one crazy lady!) xoxox

Quite honestly, I've had worse clients than her. At least the batshit crazy ones are entertaining.

i agree with the looney lady.

Keanu has banged me many times too, but he uses his hypnosis so i dont get pregnant.

Since I have the kick-ass job of working in State Government that deals with children that have wacko parents.....I get to see a lot of this stuff....in person, as in sitting 10 feet across the table from. Stuff like "the great PooBa in the sky told me to bath my infant in boiling water to clense his soul, buy my therapist and I are working on that commandment.".....that kind of shit. My point being, these types of folks are legion in our society. They 'look' normal, until you start talking to them. Why do you think that 'Tasers' where such a popular holiday gift out here this past Christmas season?

How do we know that she is the crazy one? What if we're all crazy and she is the only sane one?

There is no spoon.

Anivad - Heya! I dunno. I think he is a stiff even in his physical roles.

Steph - I think slarmi is gonna be my new go-to word for everything. ;)

Savannah - see I thought he was a bad choice for those films. Imagine an Edward Norton or even a Brad Pitt as Neo. It was his lack of physical skills that bothered me most in the combat scenes.

Limpy - but are they good in bed?

Slyde - But does he, wink wink, disguise himself as someone you, wink wink, already know?

Holly - no laughing at the Slyde!

Bruce - gotta get me one of them tasers. Sounds like fun!

That woman is fucking crazy for picking Keanu!
Seriously.
Whoa.

I liked Speed AND the Matrix films!!

Avitable - See? His mass hypnosis worked!
(And you can't really mean that you liked the last two Matrix films. Can you?)