Hot on the heels of this in-depth article from that bastion of journalistic responsibility known as MTV.com, we here at the Bug-Eyed Blog ponder the same question. Is the world ready for a dark Superman on film? And I'm not talking about ethnicity here. I'm talking about a bad Superman. A Superman who needs a timeout. Maybe a Superman who spends a little too much time at the local playground trying to get a glimpse of some schoolgirl's panties.

I know there are tons of Superman fans around (hello, Avitable!), but I just don't see a really great Superman film out there waiting to be made. Especially a stand-alone Superman film. Maybe something with the entire Justice League would be interesting, but the idea of a solo film featuring the Big Blue Boy Scout just bores the crapola outta me.

Could there be a more boring plot than that?

Unfortunately that is what you are going to get with Superman on film. There isn't anyone who can "fight" him because he has no match in that arena. So they have to use a criminal mastermind and some green rocks. Who else are they going to get? Darkseid, Doomsday, Mongul and Metallo would all look ridiculous on the big screen...too much CGI. Bizarro, Composite Superman and Cyborg Superman would just be Superman fighting himself...a circle jerk. And there aren't enough drugs on Earth to make a film with Mister Mxyzptlk works. Brainiac? Maybe. I've always rooted for Braniac to win in their meetings. And they already used General Zod in the sequel to the first film.* So he is out.

*And just when did Superman gain the power to erase memories with kiss as he did toward the end of Superman II? That's another big problem I have with Superman. His powers come and go basically at the whim of whomever is writing the story. He wasn't even supposed to fucking fly in the original Siegel & Shuster version of the character. Ugh! Don't even get me started on his ability to fly! - Earl

The only Superman I want to see on film is the one who gets his ass kicked by a super pissed-off Batman wearing a power suit using synthetic kryptonite. THAT would make my day! Yeah, I know that makes me a bit of hypocrite since I can't stand kryptonite as a plot device*. I just like seeing Batman kick his pompous ass! 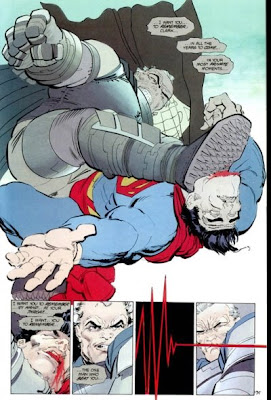 *A plot device that was introduced in 1943 (the same year he "learned" how to fly) as a part of the Superman radio program that was used, basically, to give Bud Collyer (the actor who voiced Supes) some time off. Did I mention previously how his powers seem to come at the whim of whomever was writing the story? Oh yeah, I did. Well it seems his weaknesses came that way too! - Earl

Not So Random Wiki: In deference to those who actually like Superman (hello again, Adam), this sounds like it would actually make a decent film. But it is more of an ensemble thing, even though Supes is at the heart of the story.

When Superman is written well in comics, his strength and speed and invulnerability aren't even factors. He's put into positions where that which he values over all else - human life, along with being seen as a human himself - is threatened.

If you don't go the Darkseid or Doomsday route (which could be cool if they did it right), you have to have a Lex Luthor that is absolutely brilliant. He sets up elaborate underhanded schemes and uses Superman's own powers against him by making humanity fear him. That would be a good film.

We just need someone to get that vision right.

what about a superman who occasionally beats up bad guys (but in awesome martial arts scenese) and spends the rest of his time smashing box and perving on chicks with his x-ray vision?

honestly for some reason superman just does it for me, extremely odd, i know...

I'm a Marvel man all the way. I grew up in the era of Jack Kirby and Steve Ditko and cannot look at another.

I just like the thought of there being a superman out there, real or imagined!! Hey this is my fantasy, don't make fun of me!!! :O)

Avitable - I've yet to read that iconic Superman story that I could file away as "classic". I know you are a fan, so it might be easier for you. Me? Feh.

Kiki - I'd watch it, but they probably couldn't call it Superman.

Sweets - to each his/her own. I've just never been a fan.

RW - I grew up a Marvel fan, but when I started reading again as an adult after college I found that most of the really great writers were working for DC. Also, by the late 60's/early 70's Kirby and Ditko had moved from Marvel to DC because DC afforded the artist more creative control at that time. They both did some really wonderful stuff (New Gods, Mister Miracle, Kamandi, Showcase, Shade, Hawk & Dove, etc...) in their time with DC.

Michelle - Just like I enjoy the thought of a real Vampirella out there someplace. Rowr!

Well, Kingdom Come is one of them. The other is All Star Superman, by Grant Morrison. It is absolutely outstanding.

ive never been a real big fan of supes, either. Give me the hulk anyday. I too, am pretty much a mavel zombie.

But i didnt mind the last superman movie too much, although i agree the ending was crap.

a big doomsday battle would be fun to see.

I do love Grant Morrison. His runs on Animal Man and Doom Patrol (especially Doom Patrol) are some of my favorite stories ever written.

Slyde - When Peter David writes the Hulk, there is nothing better.

They just couldn't do Doomsday without crappy CGI ala the Hulk films. Blech.

I am trying to catch up on blogs after the storm here. So I will keep my 'catchup' comments brief....this blog sucked.