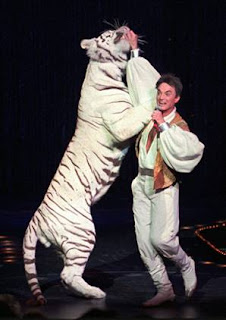 I have been trying to avoid the Olympics, but I'm a huge sports fan so wherever I turn right now the talk is of Michael Phelps and his amazing run at history in Beijing.

It's the talking head sports pundits that are really driving me crazy. Today the question has been "Where does Phelps now rank as an all-time sports great?" Most of these jackasses are saying things like "he's great, but c'mon...it's just swimming" or similar douchebaggery. The name that keeps coming up is Tiger Woods. "He's no Tiger Woods, but he's a nice story" they will say.

Now, I'm not putting Tiger Woods down here. His level of play and his level of dominance is ridiculous. But in terms of pure ATHLETICS? C'mon, man. It's no contest! Phelps is doing some outright impossible things in that weird building halfway around the world. And my Mom can golf.

As for Phelps? No way! I'm not a strong swimmer (I tried embedding the video, but Youtube no longer has it and the AOL version starts to play immediately. Stupid AOL version!- Earl), by any means, but I can't even begin to imagine doing what he is doing. My imagination just isn't that great. I can swim, sure. Just like I can golf. But that is where the comparison ends. I'll never have the luck of doing something like hitting a great 5-wood from fairway bunker and putting it 10 feet from the hole in the swimming pool. The correlation just isn't there.

So for all those idiot pundits putting Phelps down, jump into that cool, deep pool* and show me what you got! Go ahead Michael Wilbon or Woody Paige or (ugh) Skip Bayless. Show us that swimming isn't difficult, douchebags!

Random Wiki: I read this entire article on the Population dynamics of fisheries because fishing, and in particular, overfishing is a topic that fascinates me. I didn't really find anything new, and I was a bit offended by all the math there at the end, but all-in-all not a bad Wiki article. Holy crap! I'm such a geek.
Pissed in the corner by Verdant Earl at 12:01 AM

That is a lot analyzing television commentary. I thought you "worked" during the day.

Why does fishing and overfishing fascinate you?

By the way, I got the hyperlink stuff to work.

Thank you for your kind help,

Mrs. Hall - Since I mostly work at home I have the luxury of having stupid television shows barking at me all day if I so chose. Most days I don't, but I seem to have it on more while the Olympics drones on in the background. Fishing fascinated me because I enjoy it as an activity. The overfishing problem, however, disgusts me. We, as a species, have become so overpopulated that it has become a real problem. Genetically grown frankenfish seem to be the current response. Ugh.

ah, my favorite SNL skit ever...

and mrs hall, you have finally stumbled upon what i have been screaming about for years... EARL DOESNT WORK!

(Me trying to swim against Phelps)

I agree. Golf is just barely a sport. It's more "skill" than "athletic," which is fine. It's just tough to compare apples to oranges.

I agree with you about the pool too. There should be some sort of basic rule about the depth of competitive pools.

It was funny listening to different radio shows talk about why it was a "fast pool." Is the water filled with steroids or something?!?

It's the talking heads and all their regurgitated spin that keeps me away from watching just about anything these days. Everyone has an opinion; what makes their's so special?

RW - That would be me trying to swim 50 meters. Alone.

ajooja - I think the Olympic Pool in Moscow in '80 may have been filled with steroids. Especially since we weren't there to, um, protest. Yeah, protest...that's the ticket.

Steph - My problem with the talking heads, especially in sports, is that I know that half of them really don't beleive the crap that they spew. They are paid to be contrary (hello...Skip Bayless) so that's what they do. But they don't believe it. Bunch of crap, I say.

I agree with the whole talking heads business. I mean, why must we fill up everything with chatter. Can't we just watch and be interested without people yammering on?

I understand that knowing what you are watching enhances the experience. But I am all for the mute button.

Well, I don't watch much tv anymore. I miss it. But there is nothing to watch and I don't have cable to watch it with anyway. Besides, I have these tiny people clammoring for my attention and activity. They win.

But yeah, I miss cable.

Who is this Michael Phelps person? I have to assume that he is some sort of famous brain surgeon that has saved countless lives, or some peace maker that has stopped warring countries, or some great muscian whose music will be played in elevators for eons to come....let me google him and find out..... ..... .... .... ow, he is a swimmer????? (this world gets sadder every day)

my problem with phelps is that he openly admits to being awesome. which means nobody in australia likes him.
we don't take kindly to those types round here

I watched synchronized divingthe other day. Now there is a life skill.

What gets me is why the news is covering what he fucking eats on a daily basis. Why I should give a rats ass what he eats is beyond me.

Mrs. Hal - I hate to admit it, but I might die without cable. Maybe.

Kiki - Oz is second class when it comes to swimming. Ha-rooom. ;)

Great post dude! You said it much better than i ever could! Michael Phelps is some sort of eating, swimming machine! Not to hard on the eyes either!!

The pool is deeper because the water stays calmer in adeep pool than in a shallow pool, since there's more volume to dissipate the splashing. It's also colder, because for some reason people swim faster in cool water than in warm water. Probably so they can get the hell out of it quicker. They also said something about the lane dividers being high-tech, but that's when my brain exploded.