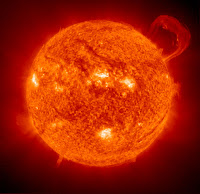 I watched Sunshine tonight, and I thought it was pretty great. A sci-fi thriller with some intelligence (and soul/Sol) to it. Not going to bore you with a review, but it's got some pretty nifty science, some pretty nifty fiction and a pretty nifty cast. Nifty. It strayed a bit in the third act, but still pretty nifty.

And it got me to thinking about Danny Boyle. I looked him up on IMDB and found out that he has only 7 theater releases as director thus far. He has one coming out later this year and he has done some television and short film work, but as far as feature-length films he only has 7.

And I've really enjoyed six of them. That's amazing to me! Here are his feature films:

I betcha think The Beach is the one that I didn't like, right? Eh! Wrong. I enjoyed it even though it seems as if I am the only one. No, it was A Life Less Ordinary that rubbed me the wrong way. Must have been in my "hate" Holly Hunter phase. I dunno.

But the fact that I liked/really liked/loved 6 out of 7 of his films blows my mind a little. The only other director who I can think of whose work I enjoyed to that kind of percentage is Stanley Kubrick. I'm not saying Boyle is as good as Kubrick, but he's got my attention.

Oh, and one of the real "finds" in this movie was the acting of Chris Evans. I've been feeling so-so about his acting thus far, including both Fantastic Four films. But I really enjoyed his work in this one. Go figure.

Random Wiki: Joyo Velarde is a Filipino hip-hop and soul singer. Born in the US, trained in Italy she is destined to be an international star. You read it here first. Oh, her debut album doesn't drop until this Fall. Suckaz!
Pissed in the corner by Verdant Earl at 12:01 AM

I'm a Chris Evans fan, simply because of some superb work in the severely under-rated Not Another Teen Movie. He's brilliant in it, I reckon.

Ah, the power of the press. Of course, it had fuck all to do with us.

I haven't seen The Beach or Millions yet, but I like every other Boyle film. Sunshine was very intense, and even with the strange addition of a "bad guy" at the end, it still held my attention.

I was also going to say what Badgerdaddy said - Chris Evans has always held his own since Not Another Teen Movie, which is, in my opinion, a parody on par with Airplane and Naked Gun. He was one of the only shining stars in the otherwise miserable Fantastic Four, and it was nice to see him get to do some drama in Sunshine.

i love me some danny boyle. although i havent seen sunshine yet.

but you know what? i did NOT like trainspotting... sacrilige, i know.

alittle too much poo-poo for my tastes..

badger - Those spoof movies suck. The Teen Movie one may have been decent, but for me it gets wrapped in with all the others. Major suckage.

Avitable - see above. Millions is the biggest departure for Boyle in the group. Very small film, but good.

p.s. NATM is a very funny film.. leagues above the rest the others in that chain.

I watched epic movie the other day and wanted to pluck my eyes out.

It must be a guy thing to even look at who the directors are in a particular movie. My husband does it all the time and when another movie comes out by a director he has liked, he will want to see it. I never even consider that stuff when I see a trailer for a movie. I usually decide whether I want to see it or not based on the trailer or something I've read about it. We do get some entertainment magazines that let us know ahead of time of movies that are in the works too, so that helps. Anyway, Sunshine sounds good though - I like science fiction usually.

Teeni - The director affects the film more than just about anyone except the lead actors, sometimes more. Going to see a film by one of my favorite directors is akin to seeing a film from one of my favorite actors. But I can see how some don't think that way. :)

Hey b.e. i noticed that Sunshine is being shown tomorrow at 1.40pm on MAX!! My DVR is all set!! Thanks dude for turning me on to a director and movie i may have not given a thought too!!!

I just never really consider it. I mean, when I see a trailer that looks interesting, I think "Oh I want to see that," and I never even think to see if it is by a director whose movies I have liked in the past. But TGH does so I that's why I wondered if it were a guy thing. I was hoping other females would voice their opinions on this one but I didn't see anything in the comments about it. Oh well. Maybe a future topic for conversation.

Just watched Sunshine tonight. After you posted this, it dropped on the doormat from LoveFilm (our Netflix, I suppose), and Trophy Wife loves Sci-fi, so there we were...

It was fun. Lovely looking film on the whole, too.

And Earl, watch NATM. If you know your teen movies - and I assume you are as conversant with John Hughes as the rest of us - watch it.

badger - glad you enjoyed it. I have seen NATM. Twice, for some reason. I hated it and all its ilk. Sorry.

I liked Sunshine right up until they intriduced the bad guy. Sorry, but I could only suspend disbelief quite so far, and that wnet past it for me.

Other than that, good movie.

Limpy - a little Deux ex Machina right there for you. They had no way of explaining some of the previous ship's whereabouts or some of the skullduggery going onboard the second ship. Enter bad guy. I sort of saw it coming, but I really didn't mind it. At its creepiest it reminded me of Event Horizon, a bad movie with some really scary imagery.