What you need, vol. III - The Conspiracy Edition 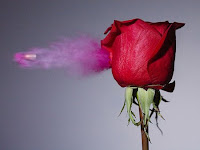 Hi, there! It was a long and exciting weekend, yo. We attended a craft beer festival out on the North Fork of Long Island on Saturday, so there was a bit of drinking going on. It was an incredibly gorgeous day, hitting a high of 78 or so where we were. And sunny too. Just perfect for spending the day with other craft beer devotees, drinking great beers and eating barbecue. Watched a couple of cooking demonstrations as well, so all-in-all...good day.

Now you get bullets:

Random Wiki: Arakaw Nagazane was a samurai in service to Uesugi Kenshin back in the 1500s. Not only was he a warrior, but he was a body double for his lord. That shit is fucking bad ass! I'm gonna read about samurai and ninjas for the rest of the night. Psyched!

I tried the game and came out a White Knight. I don't know - it made me sound like some type of goober. But I guess it could have been worse. What did it say about you?

Yeah I always go for the best slice too...

Have you made any calls on your mobile? I had full battery for a few days once. The moment I made a call the battery faded... it faded fast!

You sound like you had a good weekend xx

Teeni - I was "Hail Fellow Well Met" - the ultimate partier. Sounds about right.

AK - The only ice cream I would be a dick about is Phish Food from Ben & Jerry. Chocolate and Marshmallow. Yum!

Elise - You're back! Huzzah. Yeah, I've been making, receiving calls and texts. It's just weird.

Like your style of writing.
Different but def cool.
....go charge yo phone!

What is craft beer?

I sat through a hail storm just the other day in my car. They're not uncommon around here, but I still can't drive during one - freaks me out.

Dreamer - Heya! No way...I wanna see how long I can go w/o charging it.

Avitable - Craft beer is also known as micro-brews in certain areas, but there are differences. Basically, craft beers are small, independent and traditional. A microbrewery is one that produces less than 15,000 barrels a year, but regional craft brewers can produce up to 2 million a year. So microbrews are a subset of craft brews. Phew!

Downtown Guy - they are not only uncommon around here, but downright rare. In 41 years, this is only the 4th or 5th hail storm I've seen and by far the heaviest. By far!

you should start working out more so you can be MY body double..

p.s. blogger does that to me often.. when i posted on friday, it took about 8 hours for it to show up as a new post...

Slyde - You would have to grow a few inches, though.

It's all about the pizza. To hell with loved ones. Word.

RDubya - Just let someone try for the last ice-cold beer in the fridge. Let 'em try!

Your life has been reduced to making 'bullet point' lists....how, very, very sad.

(it is true, I always scan the pizza for the best slice. it is a male / gentic thing.)

lotus - it's part of the "just type what's on my brain" direction of the blog. Some days it's gonna be more than one thing. ;)

I go for the best slice as well. If I didn't it would leave me in a pissy mood so it is a favor to my families well being to take the best slice for the happiness of all.

That's my story and I am sticking to it.

Evyl - Sounds like as good as explanation as any. I'm going with it.