Note: If you aren't a fan of cats, then feel free to move along - Earl 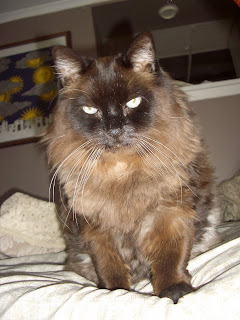 From the time that he was a kitten, Gia said that he has had what we can only refer to as nightmares. He will be sound asleep, wake up with a startled meow, then run over to her and bite down on the closest body part. Its almost funny when it happens, because you can clearly see he has no idea where he is or what he is doing. It lasts for a about 15 seconds before he recovers. Then he goes to get something to eat and forgets all about it.

The first time he did it to me a couple of years ago, I thought it was the craziest thing I had ever seen. That morning I told Gia that Syd did the weirdest thing the night before. She asked "What? Did he wake up from a sound sleep, meow and run up and bite you in the head?" And that's exactly what happened! Happens all the time, she said.

We now believe that these might be seizures of some kind. Only because he has had several larger seizures in the past couple of months. He will be sound asleep when all of a sudden he jumps up, falls down, bangs into shit...totally unaware of his surroundings. After he finally calms down there is then a period of extreme drooling where he just looks like he is out of it. Afterwards he is tired as hell and he just sleeps a lot.

Another symptom of these seizures, if that is what they are, is hallucinations. I would think that was funny, but the other day he was cleaning himself on the couch (thanks!) when all of a sudden he started hissing loudly at "something" on the couch and he backed up and eventually ran away. The only thing on the couch besides him was me, and I wasn't anywhere near where he was hissing at. There was nothing there at all. Maybe he sees dead people.

We had a complete set of blood tests done and they all came back negative, and the vet doesn't want to put him on anti-convulsive medication since the seizures aren't occurring at what they consider to be a frequent basis. The next step, I guess, would be a cat-scan (no pun intended) to see if there is anything wrong with his brain.

I dunno if I want to go there. Because if there is, I'm not sure if they can do anything about it. So we are in a kind of "watch and wait" phase with him right now.

I hope the little guy is okay.
Pissed in the corner by Verdant Earl at 12:01 PM

concerning the cat, maybe he is like a feline "Russel Crow" from a Beautiful Mind? He would be like a super genius cat that has hallucinations...

if you wake up one morning and see the quadratic formula scawled onto your kitchen floor in kitty litter, THEN you'll know...

I hope everything's okay with him.

Slyde - you most definitely are a fan of me. A stalker, even. And of course Syd is a savant. That makes sense.

b.e i hope Syd is OK! You know W&W is not necessarily a bad thing. If Syd is OK regarding his eating and everything else a kitty does, i say let it be! I'm just saying!!

Epilepsy in cats is very common. They won't give him anti-convulsants unless they get really bad because unless the cat has an extended seizure, (I forget what they call it) it involves lots of medication for the lifetime of the cat.

I would have the cat scan done because I would need to know. We have six of the feline rodents, dontchaknow.

He really is a gorgeous cat.

I have never worked with cats with seizures, but I was a neurology nurse for three years. I worked with adults and kids who had seizures/epilepsy amoung other things.

The events of you describe, banging around etc sound like regular human seizures. Well, humans are animals, but . . .

I can tell you that in humans, the longer seizures go untreated, the more severe and closer together they will become. Usually.

I am not sure how it works in cats.

For me, having seen and worked with seizures as a nurse, I say, screw their protocol. I would want my cat on meds. Seizures are suffering.

And as for the CAT scan. This could be of some use. But I wonder what are they going to do with the results. If they find a tumor, are they going to remove it? Before I order any test I ask, how will effect the course of treatment? I would pose this question to your vet.

That's my opinion, and I am sticking to it!


I am sending love to Syd!

Michelle - oh, his eating habits are fine. Too fine. He's a robust 25 pounder. But he's not fat. Just big-boned. Like Cartman. ;)

Ann - Yeah, I read that about the anti-convulsants. Thanks!

Mrs. Hall - thanks for all the info and love you are sending to Syd. He seems okay today, but if anything would happen to him Gia would lose her mind. Me too, but not as bad as her. I've only known Syd for 2 years. She's had him since he was a kitten and he is a special animal.

Nettl used to be a surgical nurse at a local feline hospital. She says it sounds like epilepsy and a cat-scan and MRI is what they'd need to do, but by the sounds of it, it doesn't happen frequently enough --nor do the siezures sound severe enough-- to make it worth the incredibly high expense.

I think your vet is giving you the best advice he or she can. I'd go with that. If he or she doesn't think anti-convulsants or a cat scan are appropriate, then I would listen.

Aww, Syd is gorgeous! My only concern is that cats are so tightly wound and high strung that if Syd is one of those states where he doesn't know what he is doing, he could end up getting hurt. I'm sure Gia and you will make the best decisions for him as well as keep a good eye on his as it sounds like you both care for him a great deal. He's a lucky cat and I'm thankful he has you both. :)

Steph/Ann/Teeni - thanks for the advice and support.

Good luck with all this. Sounds really shit.

badger - Well, from reading about it more and the comments above it doesn't appear to be as serious as we thought. Thankfully. Just scary to see your cat flopping around for no apparent reason.

aw, poor syd!
Kozmo has been growling and hissing at nothing in particular too, but he's never attacked anyone in his sleep.

here's hoping he gets better!!

Diva - He doesn't bite down very hard and its actually a little comical. Like he wakes up from a bad kitty nightmare and doesn't know where he is for a moment.

Each kitty has his or her own set of quirky challenges. Syd's happens to be seizures. Do what you can medically and monetarily, but love the shit out of him otherwise. Lots of cuddles and "I love you pretty boy!" talks.

I'm a tad late to this discussion (just a tad!), but I thought I’d bring up another possibility that hasn’t been mentioned: sleep terrors (also known as night terrors or pavor nocturnus.) Humans who have this sleep disorder experience something somewhat like a nightmare, but the difference is that it occurs at a different stage in the sleep cycle, it’s very hard to wake them up from it, and they actually get out of bed and start acting on the things they’re “dreaming” about. They might look like they’re awake--out of bed and hallucinating with their eyes open--but in fact they’re still asleep. Everything they’re doing is in response to whatever’s going on in their night terror, so they run away from or attack things that aren't there while either ignoring people who are actually present or incorporating them into the sleep terror. Usually they go back to regular sleep after it's over and have no memory of the episode.

I don’t know if sleep terrors are diagnosed in animals or not, but considering the fact that cats dream and go through similar stages of sleep as humans (with different timing), it’s not unlikely that they could experience sleep terrors as well. Of course it’s quite possible that all of you are right about Syd’s problem being seizures. This is just pure speculation coming from someone who’s neither a cat owner nor a physician, but it immediately popped into my head when I read your description of his symptoms, so I wanted to throw it out there.