The Summer Olympics start today. Or they may have started a few days ago with soccer. Who can tell? I, for one, don't really care. Every four years athletes from around the world compete in events in hopes that they won't be implicated in the next doping scandal that comes around. That's what it is to me.

Oooh. Maybe Team USA in Men's Basketball can recapture our honor by beating someone else's team of professionally paid players. Bunch of crap that is. I have to say I hope we fall on our faces on this one. I kinda like that the world has been kicking our ass at basketball for a while now. Serves us right.

Maybe Shawn Johnson can become America's next little sweetheart by winning all-around gold in Women's Gymnastics. Hey, did you know that there is no longer such a thing as a perfect 10 in gymnastics? Uh uh. Now you can strive for a 15...a 16 or even, gasp, a 17! Nothing like taking something simple and making it clunky, eh?

Maybe China will overtake the US for the most gold medals in this year's competition. On second thought, no maybes about it. They will. Even if they have to spike the air to do it. Let's not fool ourselves people. This is THEIR Olympics. Not the world's Olympics. It's better if we all accept it now.

Maybe someone will break the world records for the discus throw and/or the shot put this year. I find it odd that those records were set almost 20 years ago each. Do you think they may have been cheating back then? Ugh! No way! But seriously, since when do track and field records just stop like that? The natural progression of athletics is always faster, better, stronger, more. Seems weird.

Maybe I will actually watch some of the events. Maybe some Women's Beach Volleyball or Women's Synchronized Swimming pairs (just to catch Brazilian twins Bia and Branca Feres). 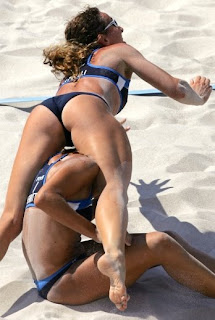 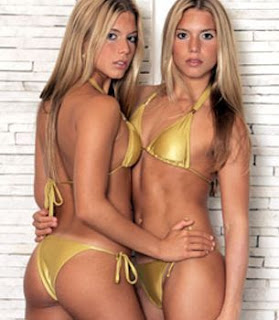 *Nerdy Title Explanation - The title of this post comes from an incident that occurred when a friend of ours beat Slyde in a game of Magic: The Gathering. We were new to the game and didn't know all the rules. Our friend won by using his Dwarven Warriors to make one of his larger monsters unblockable against poor Slyde who had no way to defend these attacks. I explained on the way home that he shouldn't have been able to do that because the creature his Dwarves were making unblockable were too powerful for the effect to work. He immediately called our friend out on it and a name-calling fight ensued. See...I told you it was a nerdy explanation.

Random Wiki: Thomas of Ireland was an Irish writer. Duh! Not the writer part, but the Irish part. Its right there in his name, after all. Sheesh. From hence forth, all references to me shall be in the form of Earl of Intoxication. Thank you.
Pissed in the corner by Verdant Earl at 12:01 AM

i cant beleive that you just told that story... now everyone will know that im really NOT cool.

Slyde - They already know. A lot.

I had an epiphany watching the Seoul Olympics in 1988. Watching the synchronised swimming I thought "Holy shit! I've been training and competing in this 'sport' for 2 years?! Am I crazy?" I had never seen anything so ridiculous in all my life and despite the thousands of laps I'd swum, all the eggbeaters I'd beaten, all the dolphins and torpedos I'd done, it had never occurred to me that it were shite.

The Olympics is only good for shattering dreams...

I really loved the Olympics when I was a kid. I felt the same way about Jim Thorpe, Bruce Jenner, Edwin Moses, and Dwight Stones like you probably felt for Babe Ruth, Mickey Mantle, Reggie Jackson and Don Mattingly.

The problem is that my taste for events is different than NBC. I don't care that much for gymnastics. I hate the opening ceremonies. I don't want to see only Americans. It's weird how I've faded away from the Olympics over the years.

Are the Olympics this year? Holy crap.

AK - "The Olympics is only good for shattering dreams..." Wow!

Hi, first i totally love the look of your blog! So freakin cool!!

Now, the olympics, honestly they bore me to tears! I simply cannot sit for any length of time watching it. I'm just saying!!!

What else can one watch in the middle of the night during summer??? I have to say I watched last night and the male gymnast were swinging around... the only thought that entered my mind and never left was that "THEY HAVE ARMS I COULD LICK..ON A GOOD DAY!" but that is the only thing about them....

Totally not paying attention to the games... but enjoyed the MTG story. :)

Michelle - Heya, and thanks!

Sunshine - I was forced into watching basketball this morning by my girlfriend. I was not happy.

4Leaf - And Slyde was worried that it would make him seem un-cool! ;)

Do so love the title explanation.

Yep, love that explanation – though with that in mind, you could say this blog is the place for shattered dreams. I thought Slyde was cool.

I love the Olympics. Completely. I'll watch absolutely any part of it, too. I spent the first 10 minutes at my computer this morning watching the womens 400m freestyle swimming and it was awesome. Actually made me cry.

Why? I don't know... Something about people pushing themselves as far as they humanly can, especially if they're not dope cheats... Drug cheats really piss me off and I'm delighted our fastest sprinter couldn't go – man's a fucking cheat and he deserves his ban. You don't want the responsibility, don't commit the action. Welcome to adulthood.

Enough of my burble. I love the Olympics, and FYI, in the swimming the American lady looked absolutely gutted to get silver. Who on earth is disappointed to get a medal of any colour???

Liz - I wonder how he will retaliate.

badger - I guess you build yourself up to be the best...not the second best. But there is something to be said for being a gracious loser.

I agree, it's not the world Olympics, it's China's Olympics. Ah well I'm waiting for the 2010 games in Vancouver, let Canada strutt it's stuff!

I used to hate when the Olympics were on. When I was a kid we didn't have cable tv and so when the games were on they were on all three channels that we received. It sucked, for two weeks there was NOTHING to watch.

Paige - Canada's games, eh? Will they dominate like China currently is?

After seeing those Brazilians, I need something synchronized.

Evyl - they seem kinda into each other, don't they?

I glimpsed about 15 minutes of the opening ceremonies for the Olympics on Friday. Which reminded me of why I don't watch them anymore. When I see the country of Southwest Swasi-Bhatswama-land march into the stadium with thier 5 particpating atheltes, all I can assume is that they are the nephews of the ruling dictator, who are using the Olympics as a free 2 week party. They have no chance of winning medal and probalby have no athletic ability at all. And the countries that send 300 athelets to the games are doing so for promotional purposes. If I am an athlete that loves the game I play and wants to excel, I really don't need to 'prove' it everyone else by getting a medal or an endorsement contract. I just just enjoy particpating in the act. Not being on the stage. The Olympics are over commercialized and political for my tastes anymore. If you want amatuer sports? Go watch your son's little league team.

I can understand people not liking the Olympics, but Lotus, you make a lot of assumptions there... and some of them make you sound a tad xenophobic, or perhaps just against countries that don't have the numbers of the facilities, or even the wealth that the US has.

It's that very thing that makes the Olympics great for me.