Disclaimer - This post is mostly for me. I know that no one really cares about my take on college football and Notre Dame, but it was on my mind and I've been trying to blog about exactly that. But I did try some new beers last night, so go here and read about that instead. Or be bored by the post below about the Irish. You have been warned. - Earl

As kids and parents everywhere are getting ready for school to begin all over the country, I can only say that this is usually my favorite time of the year. And it has nothing to do with school. Well, maybe a little. It has to do with college football. And the Fighting Irish of Notre Dame.

I say "usually" because, frankly, the Irish aren't very good right now. A tragic 3-win season last year and a soft schedule this year means that things are kinda looking up, but I'm not too optimistic. It's hard being an Irish fan these days. Besides the fact that most of the country hates Notre Dame and it's fans, especially it's alumni. I grew up in New York in an Irish-American Catholic household, so of course I became an ND fan. Try not to hold it against me.

There are some changes I would like to see, however, in the ND football program. The biggest change I would like to see is to have them join the Big 10 Conference. I know, then it wouldn't be the Big 10, right? Wrong! It already has 11 teams so adding one more shouldn't matter. But this needs to happen. Screw the television rights, the fans, the games against Army and Navy, the alumni...screw everyone! I just don't see Notre Dame, as an independent, every making it to the top echelon of college football again.

Why do I think this will help? I'm not sure, but it couldn't hurt. They still will have problems recruiting because of stricter admission policies. But the yearly, consistent quality of the competition will be stronger and that can only make the program stronger. Eventually. The conference can work around the school's lucrative TV contract and make this work. And ND has already joined a conference in basketball (the Big East), so its not like they are holding on to some idealistic image of an Independent college team.

So let's make the move, Notre Dame. It's time.

One more thing. I don't care if he only started playing football a few years ago. I don't care that he was the third-string quarterback his senior year in high school. I don't care that he is a walk-on largely in part to his father's friendship with Charlie Weis. MAKE NATE MONTANA YOUR STARTING QUARTERBACK!!!! Joe Montana's son as QB for the Irish? You fucking kidding me?!? Make it happen. Now! 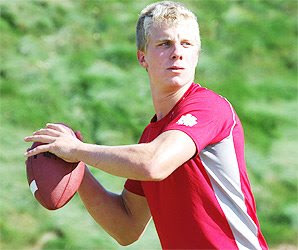 Random Wiki: The Rising Sun Performance Company is a bunch of actors and such working someplace Off Broadway doing whatever it is they do. But their Wiki includes a picture of a dude (I think it's a dude) trying to tongue kiss a snake. Score!
Pissed in the corner by Verdant Earl at 12:01 AM

I guess the disclaimer scared everyone away!

I always thought Notre Dame was renowned for its Woman's Lacrosse Team......they play football too?

this post was just another excuse for you to show some man-candy on your front page...

So I suppose that you will be putting the Rudy DVD on and drowning your sorrows this football season.

Slyde - anything for you pooky.

Evyl - That movie sucks. OK, I guess I like it a little bit. Sniff.

Why do bloggers feel the need to justify or apologize for certain posts?

If we read blogs, we read them for many reasons. My reasons are to hear different people tell their different stories.

Plus, it is your blog, you can put fart jokes up for a week and really, that is your choice.

So, I hear what you are saying about Notre Dame. It was interesting and thought provoking.

I am very recently starting to understand what it is to be a fan.

I shall answer back, sort of, with a post about the Green Bay Packers. I went to my first game last night. My first football game ever, really.

any suggestions on writing up a sports story? I don't want to make it too girly. But then again, maybe I will.

Mrs. Hall - It's the human condition to say things like "I know no one is listening, but I'm saying this anyway". Can't be helped. Write your sports story the way you write all your posts. I'm sure it will be great.