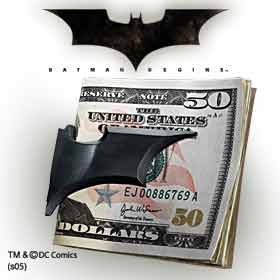 I was reading this article about how much money the new Batman flick is making in the US. Because it's a little past 1AM and I can't sleep.

I found this little gem of a quote in the article:

"It's a film that is just rewriting the record books every day and redefining our notions of what a blockbuster can be," said Paul Dergarabedian, president of box-office tracker Media By Numbers.

First, I'm pretty sure somebody just made up that last name. Dergarabedian? Really? It's like they aren't even trying.

Second, I'm glad that something is redefining my notion of what a blockbuster can be. Before The Dark Knight, I just assumed it was a film that made a shitload of money. Now I can see that it's, well, um...hey, wait a minute!

Random Wiki: Viscount Amory was a title created for some dude named Derick Heathcoat-Amory back in 1960. I'm pretty sure that is another made up name. Who spells "Derick" with one "r"? Anyway, it was a title, but it has since become extinct since Derick with one R's death in 1981. I think they should have had a round-robin MMA tournament to bestow the title onto some other son of privilege. I'd watch that on pay-per view. A bunch of nancy boys in a slap fight. Cool.
Pissed in the corner by Verdant Earl at 1:13 AM

I'd watch the tournament.

Evyl - they really missed out on an opportunity there.

But it's a super-big shitload!

i have been just crowned the new "Derick"

Avitable - aha. How do you measure that?

Slyde - I knew you could win a slap fight with a bunch of nancy boys. "He hit Buddy! Get 'em girls!"

In Hollywood, it ain't the art thats the thing....it is the money. The money is the thing.

the dream of every Hollywood producer is to convince everyone in the world to pay $50 to sit in a room for 20 minutes and stare at a blue dot on screen.

I am not sure if I am too late to add to the interesting blog pile, but...

Two blogs I read, that are vastly different are:

But her life is like nothing I have ever read. And nothing I ever want to experience. Above all, what keeps me reading is her writing. She is an excellent writer. And she tells her story in full. It is a great blog.

2. A gay athelete's life is also a good blog. I am neither gay, male, nor a minor league ball player, so this is why I read his blog. Because he is all of the above.

Another warning, he does describe his sexual experiences, which can be disconcerting for some. Me included. I enjoy the emotional content, the personal stories of his life, being closeted.

But, he has been posting a lot of cheesecake shots lately. I might give up on his blog soon.

That's it for me!

a random google search finds that this 'Dergarabedian' name isn't made up...

hey, did you hear about the guy that was into S&M, necrophelia and beastiality?
talk about flogging a dead horse...

Mrs. Hall - Thanks, and I'll check them out.

Kiki - I'm not convinced. Wait..do the google searches lead back to this blog? Cool!