Note: The more eagle-eyed of you might spy a new blog over there on my sidebar called the Beer Eyed Blog. Just started it yesterday. I've been doing a lot of browsing on other beer sites as part of, ahem, research for Gia's new job as a new market rep for a beer company. Research...yeah, that's the ticket. Anyway, I'm gonna be only discussing beer topics over there so feel free to pop in for a cold one. - Earl

So Jiggs changed his masthead yesterday to include the classic Soviet hammer and sickle. I wanted to wish him good luck and cheers, so I had to look up how to spell "na zdorovje" which, according to every film I've seen with a Russian character drinking, is what they say over in Russia in lieu of "cheers".

But according to this site they really don't say that at all over there. Apparently it's just an incredibly widespread myth. That gets my goat a little, if it is true. It means "to your health", but they just don't use it as a drinking cheer. I'm shocked, I tell you, shocked!

Anywho, here are some of my favorite drinking cheers from around the world sans the cool ethnic punctuation marks (because I don't know how to do that):

Asturian - Gayola. I've never heard of this country or language, but I'm using "gayola" from now on!
Chinese - Yung sing ("drink and win"). Indeed.
Danish - Skaal. I like that.
Hawaiian - Hipahipa. I got the hipahipa shakes!
Italian (formal) - Cin cin. How cin-ful!
Thai - Chook-die. They hate those fucking chooks.
Zulu - Oogy wawa. No explanation necessary.

Another shocking thing I came across yesterday was this photo expose that wondered if Michael Phelps is, indeed, a douche. In case you haven't run into this specific sub-species of homo sapien, here is a very brief rundown on how to spot a douche (also known as a douche bag - Earl).


Now there are some exceptions to these rules. Not everyone who shops at A&F are douches. Nor are everyone who sport tribal tats. But if you hit 2 or 3 out of 5 on these rules, then you are probably a douche. 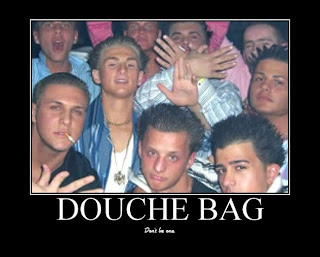 Random Wiki: Walnut Grove is a township in Nebraska, but there is nothing in the Wiki page that mentions it was also the name of town in "Little House on the Prairie". WTF? Someone fix that please.
Pissed in the corner by Verdant Earl at 12:01 AM

That Italian one is pronounced 'chin chin', but I'm sure Slyde would have told you that, before changing his own phrase to 'gayola', obviously.

I can't remember the Russian one. Been there five times and been drunk every time, which I think is why I can't remember it. But I'll be in Ukraine again in the next couple of months, so I shall research it...

I think that's cos it's actually Polish. My partner and his family say "Na Zdrowie" all the time. Most of what Borat seems to say is Polish too. Can't think of any Australian cheers off the top of my head other than "Up yer bum".

it always comes back to me, doesn't it.

for the record, i was the FIRST person in the world to get a tribal tat, so for me, it was uber cool.

its just the rest of the world that made it douchy...

You got the Italian right, but it's pronounced chin-chin. We also say "auguri" which means good luck.

The Edward Ball toast is "Confusion to the enemy!"

But it's kinda hard to say the further along you get....

I'm learning way too much over here - and a lot of it is about Slyde. LOL.

I am happy to report that I do not meet any of the Douche criteria.....Bottoms UP!

Lesser American Douchebag - that phrase made my day :D

Didn't know 'up yer bum' was an Australian toast but I'm not surprised. It's also part of a South London way of saying 'hello' as in 'All right geezer? Up yer bum'.

Pleasingly demotic or what?

If you are interested in a site where douchebags are made fun of, please see:

It is very, very funny.

someone who;; talks shit, starts shit, wont finish their shit, &&and the end of the day still thinks they own the universe.

Someone who is so much of a douche bag that one cannot just call him/her a "d-bag" or "douche" or just plain ole "douche bag." So you have to multiply douche bag by douche bag to truly define the individual as a super huge douche bag or just aptly put...d-bag squared.

Both from urban dictionary!

But, i don't think Phelps is a douche! He is really kinda my hero!! I'm just saying!!!

I have a tribal arm band. I do not share any of the other traits so I wouldn't consider myself a douche only a redneck.

Artful Kisser - It's Polish and variants are used in Russia, Bulgaria and a number of Eastern Bloc countries. I think.

Teeni - Be wary of too much Slyde info. Very dangerous.

Lotus - I was sure you weren't a candidate!

Mrs. Hall - I love that site. Been there many, many, many times. Not as a subject. Merely a viewer. ;)

Michelle - I don't think Phelps is a douche either, but those photos don't help.

Evyl - See! Each one doesn't make you a douche. Just the full or semi-full catalog.

It's sad that Phelps is such an amazing athlete, but hasn't yet figured out how to not look like a dumbass outside of the pool.

Jiggs - Must be tough being a millionaire multi-gold medalist these days.